Neither upbeat nor sombre: U of T alumnus commissioned to compose new carillon piece to mark First World War 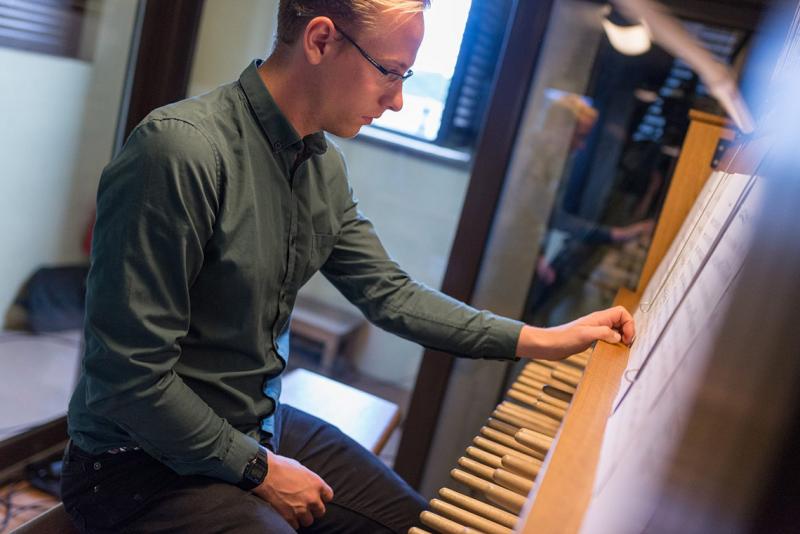 Scott Allan Orr (BASc 2014), who graduated from U of T with a degree in chemical and environmental engineering, is now a lecturer at Oxford University ( photo by Kaunas Art House)

This year’s Service of Remembrance at the University of Toronto will feature new carillon music specifically commissioned to commemorate the 100th anniversary of the end of the First World War.

The ceremony is set to take place at 10:20 a.m. on Friday, November 9, at the foot of the Soldiers’ Tower adjacent to Hart House.

As part of the service, music on the tower’s 51 bells will be played by U of T carillonneur Roy Lee (JD 2004). The postlude, at the end of the event, is a new piece written by U of T alumnus Scott Allan Orr (BASc 2014) to mark the anniversary of the First World War armistice on Nov. 11, 1918.

Orr, who graduated from U of T in 2014 with a degree in chemical and environmental engineering, is an experienced carillonneur and composer who also plays piano.

He became interested in the carillon after taking a tour of the Soldiers’ Tower while he was an undergraduate at U of T.  He was there to see the architecture of the structure, but was impressed by the beauty of the carillon, which is played by striking a series of batons with the fists, and pedals with the feet. These are connected to clappers that hit the inside of each bell in the tower.

He was approached by Lee – his former carillon teacher – last year to write a special composition, in a project sponsored by U of T Alumni.

Orr says he was given carte blanche, on the understanding that the piece be appropriate for a memorial service, while sending a message of hope and peace. He has titled the composition, which lasts about five minutes, Everything that Rises Must Converge, a quote from the writings of French philosopher Pierre Teilhard de Chardin referring to the universe’s complexity and direction.

“I felt this quote was appropriate in thinking about past conflicts and the developments that follow, especially when reflecting on the past 100 years and seeking hope for the future,” Orr says.  He adds that he wanted the piece to be neither upbeat nor too sombre, but to have contrasting sections that reflect different feelings.

It is written in a major key to reflect a positive sentiment, he says.

Orr is currently a lecturer in physical geography at Oxford University’s St. Catherine’s College, and will not be able to attend the debut of his composition, but says he has heard a recording of Lee practising it.

The Friday ceremony will also include the recitation of the poem In Flanders Fields, written by University College alumnus John McCrae (BA 1894 UC, MB 1898, MD 1910), readings, hymns, laying of wreaths, The Last Post, The Lament, Reveille, and the royal and national anthems.

Among the other carillon pieces Lee will play at the event is a composition by the late Belgian composer Géo Clément, who was carilloneur in Mons, Belgium. Lee says he chose this piece because Mons was liberated by Canadian troops on the last day of the First World War.

Orr’s new piece will be played again on the Soldiers’ Tower carillon on Sunday afternoon, Nov. 11, at a sunset ceremony that will feature a number of carillon compositions. The event, from 4:45 p.m. to 5:15, is part of a national Bells of Peace program initiated by the Canadian Legion, where bells will be tolled at the same time across the country to mark the centenary of the armistice.

Orr says he plans to submit his new piece to the Guild of Carillonneurs in North America, the organization that promotes carillon music in Canada and the United States, in the hopes they will publish it and it will be used in future ceremonies.

This is not the first commission for carillon music that Orr has earned. Last year he won the open category of a competition to write music for the carillon in Ottawa’s Peace Tower in commemoration of Canada’s 150th birthday. The winning piece, Festive Rondo, was played for the first time on the Peace Tower carillon on July 1, 2017.