Be the change you want to see: U of T grad Anowa Quarcoo is using tech to improve peoples lives 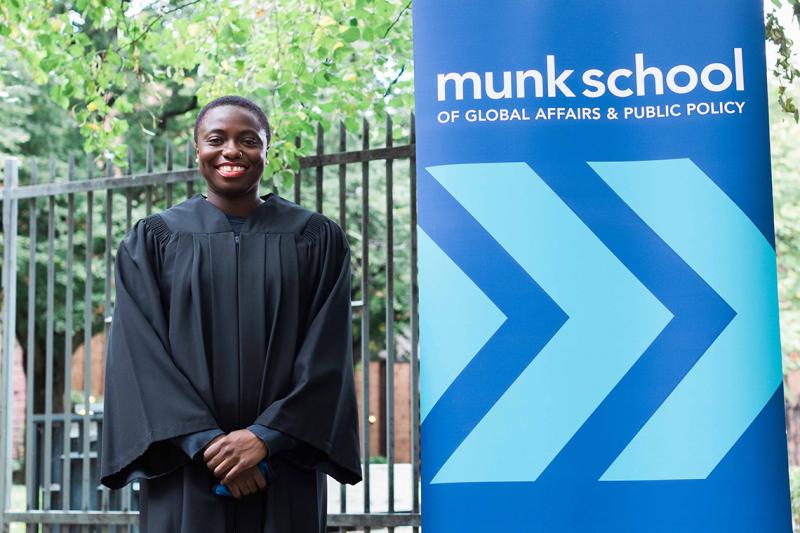 Anowa Quarcoo, who recently graduated with a combined master's degree in global affairs and business administration, has worked with groups in Toronto and Africa that use technology to achieve social development goals (photo by Matthew Volpe)

Anowa Quarcoo (MGA/MBA 2020) gets bored easily – a quality she’s transformed into a great strength by using it as a signal to learn new skills.

It was a winding road, with stops in public service along the way.

“I have a background in journalism and started off wanting to be a journalist – then the 2008 financial crisis happened,” says Quarcoo. “It was really hard to get a job as a journalist, so I ended up working in corporate communications. I was a generalist: I did a bit of everything: digital, public relations, marketing, crisis management and corporate social responsibility.”

Quarcoo, who graduated at U of T’s virtual fall convocation ceremony on Nov. 21, came to the MGA/MBA with eight years of work experience in corporate communications and had worked for all three levels of government. Of all of her duties, she says it was the corporate social responsibility (CSR) work that piqued her interest the most.

“One of the companies I worked for didn’t really have a CSR program, so I ended up building one. It made me think, ‘How can you have a social impact and what does that look like?’ I started looking for opportunities to explore that. I wanted to do something that had meaning and could impact people.”

This credo informed Quarcoo’s time at U of T. Many projects she worked on allowed her to look at the intersection between technology and social issues. For instance, Quarcoo traveled to Tanzania with the Reach Alliance in 2019 to research Tanzania’s medical supply chain. She ended up co-authoring a report with her findings, detailing how Tanzania successfully distributes medication to rural areas.

“I've always been a fan of interdisciplinary learning and the Reach Alliance was a cool opportunity to do something tangible that has the potential to have an impact,” says Quarcoo. “I was really drawn to the fact that I would be able to learn about research methodology – from getting approval from the ethics board to publishing an accessible and academically rigorous report.”

Born to Ghanaian parents, Quarcoo grew up in Kenya, Uganda and South Africa. She says her experience with the Reach Alliance offered an encouraging example of locally-led development in Africa.

“I think often when people talk about the continent, they talk about the work that international organizations are doing,” she says. “They don’t talk about the amount of agency that Africans have in their own development. The Reach Alliance project was even more interesting when we uncovered that. It was a great story of agency.”

Quarcoo’s interest in technology and social impact featured prominently in her internship with the MGA program. Through funding from a fellowship with the Open Society Internship for Rights and Governance (OSIRG), Quarcoo worked with Africa’s Voices, a non-profit organization in Nairobi that finds ways to use technology to centre African citizens in Africa’s development.

While at Africa’s Voices, Quarcoo worked on a consultancy project with the Mastercard Foundation, looking at how to use technology to engage with program beneficiaries.

“When you think about development programs, you often think of folks sitting in offices in Geneva saying, ‘Oh, we're doing all of these great things!’ But the beneficiaries of these programs don't really have an opportunity to be involved or give voice to what they're experiencing,” says Quarcoo. “So Africa’s Voices aggregates data to give a clearer idea of what issues beneficiaries are dealing with. That allows us to measure actual impact.”

Through OSIRG, Quarcoo also had the opportunity to attend a two-week seminar in Hungary.

“There’s a saying in the civic tech community: ‘Nobody is coming, it’s up to us’”

Her interest in tech and society goes beyond the classroom. She is the co-founder of Civic Tech Toronto, a group that uses technology to address or examine civic issues.

“Civic Tech Toronto finds ways to use technology to solve civic problems,” says Quarcoo. “One of our early projects was something called Budgetpedia. The premise was to help people better understand Toronto’s budget and see where funds have been allocated. Since then Civic Tech’s incubated a bunch of really interesting projects. A lot of tech folks program and code, but they don’t often get to do things that have a social bend to it, and vice versa.”

Quarcoo, who served as a student ambassador during U of T’s virtual fall convocation ceremony, is currently working at Ontario’s Ministry of the Attorney General. To celebrate convocation, she planned two Zoom parties: one with friends and one with family members scattered across the globe.

She has food for thought for her fellow graduates: “Every generation has an opportunity to shape the future. There’s a saying in the civic tech community: ‘Nobody is coming, it’s up to us.’ Don’t wait for someone else to make the changes you want to see in the world – you should be the change you want to see.”

“Every generation has an opportunity to shape the future”