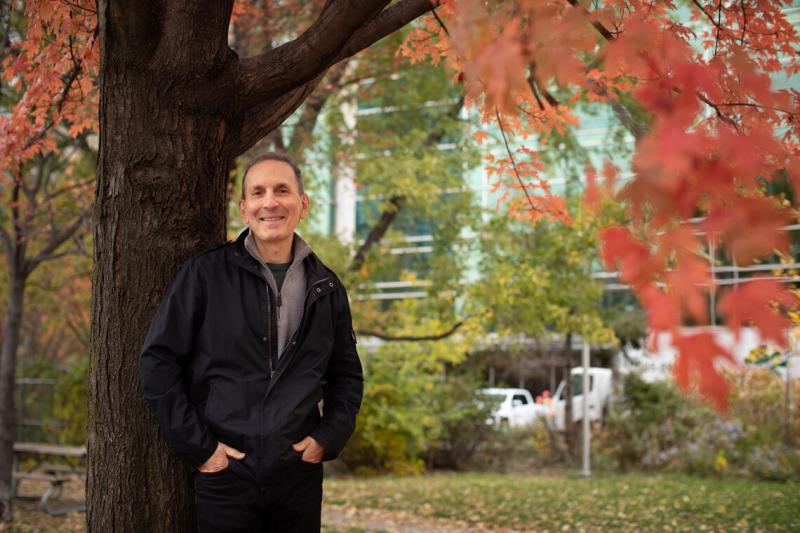 A pioneer of gut hormone research that led to therapies for type 2 diabetes, obesity and short bowel syndrome, Daniel Drucker (MD 1980) is investigating whether the same hormones can help treat everything from heart disease to Alzheimer's (photo by Johnny Guatto)

Drucker, a U of T alumnus, a professor in the department of medicine at the University of Toronto’s Temerty Faculty of Medicine and a senior scientist at the Lunenfeld-Tanenbaum Research Institute at Sinai Health, has pioneered research on gut hormones that has led to life-changing therapies for people with type 2 diabetes, obesity and short bowel syndrome.

Now, Drucker’s lab is studying how these same hormones work in the context of other conditions throughout the body, which could result in treatments for an even wider variety of diseases.

Drucker, an inductee to the Canadian Medical Hall of Fame and winner of the Canada Gairdner International Award, is most well-known for his contributions to the discovery of glucagon-like peptides (GLP-1 and GLP-2), gut hormones that help control insulin and balance blood sugar levels, and for the development of related therapies for diabetes, obesity and intestinal failure.

Yet, beyond conventional metabolism, drugs based on GLP-1 can also reduce plaque formation in arteries, or atherosclerosis, and control inflammation in several organs. Plaque and inflammation are linked to heart attack, stroke and other cardiovascular diseases – some of the leading causes of death in people with type 2 diabetes and obesity.

Research that's uncovering "where that magic is happening"

In a study recently published in JCI Insight, Drucker’s research team investigated the role that specific GLP-1 receptors play to make GLP-1 drugs effective against cardiovascular and liver disease in the aorta and liver of mice.

In the first half of the study, Drucker’s team saw that the GLP-1 drug reduced plaque in the arteries, but the presence or lack of the GLP-1 receptor in blood vessel and immune cells in the aorta did not play a role.

“We’ve ruled out the importance of receptors in these cell types, but we still don’t fully understand how GLP-1 reduces atherosclerosis," says Drucker.

This negative result was valuable, but the second story the paper told was more novel.

The mice developed fatty liver disease, liver fibrosis and liver inflammation through the same high-fat diet that triggered plaque development in their arteries. The researchers saw that the mice with GLP-1 receptors in specific cells in their livers responded well to the GLP-1 drugs, whereas the “knockout” mice without the GLP-1 receptor in these cells did not – despite both groups losing weight as an effect of the GLP-1 drug.

This outcome suggests that even though weight loss has conventionally been important for GLP-1 action to reduce fat and inflammation in the liver, it may not be the whole story. In, fact GLP-1 may reduce liver inflammation through mechanisms independent of weight loss.

“This paper is the first to show that even though weight loss is the same in both groups of animals that we studied, the animals that were missing the GLP-1 receptor in the immune cells in the liver did not have the same therapeutic benefit,” Drucker says. “It's really the first paper to show that there's another element to the story of how GLP-1 works in the liver.”

GLP-1 drugs are already in phase three trials to treat liver diseases such as non-alcoholic steatohepatitis, a more aggressive form of fatty liver disease. So, it was not surprising for the researchers to see that mice treated with GLP-1 drugs saw reduced liver inflammation.

But Drucker said it was exciting to identify GLP-1 receptors in specific immune cells in the liver, which may be necessary to get the full therapeutic effects of GLP-1 drugs to treat fatty liver and liver inflammation. This finding could lead to more targeted and effective treatment options.

Overall, the study is another piece in the puzzle of how GLP-1 works in different areas of the body. But researchers still need a better understanding of how GLP-1 drugs produce their multiple therapeutic benefits in treating diseases.

“If I could figure out how GLP-1 reduces heart attacks and strokes, and I knew where that magic was happening, maybe we could make even better, more targeted GLP-1 therapies to produce more effective medicines,” Drucker says.

“What clinician scientists are really good at is asking the important questions that are directly relevant to human disease,” he says. “I’ve always tried to ask questions that are not just interesting for the sake of basic science, which is important by itself, but also questions that might inform how disease pathophysiology and drugs work clinically.”

He says that what makes the GLP-1 story so exciting is that physicians are able to treat diabetes and obesity by conventionally lowering blood sugar or bodyweight, but also by attacking cardiovascular risk, the number-one cause of death these patients face.

“Until recently, there haven't been therapies that go beyond lowering blood sugar or reducing bodyweight to actually show there's a reduction in death,” Drucker says. “GLP-1 therapies are changing the natural history of these diseases.”

Improved disease outcomes may soon extend to other conditions. Emerging data suggest that GLP-1 drugs have an anti-inflammatory effect to treat a wide variety of diseases, and the next frontier could be Alzheimer’s disease now that GLP-1 drugs targeting the condition recently entered phase three trials.

Drucker says that if GLP-1 drugs work to treat Alzheimer’s, it would likely reflect a combination of neuroprotection, improved brain metabolism and reduction of inflammation associated with the condition, which could also improve cognition and slow the course of disease.

“Whether it’s in the pancreas, blood vessels, the liver, or the brain, increased inflammation is a driving component of the pathology of all kinds of different diseases,” he says. “I believe that one reason GLP-1 is the Swiss Army knife of metabolism – that it can do so many different things in so many different organs – is its ability to reduce inflammation.”

Exactly how that happens, however, is still shrouded in mystery, Drucker says.

“There’s a huge amount of uncertainty as to how GLP-1 controls inflammation in different organs in the body, and that’s a major focus for our lab right now.”