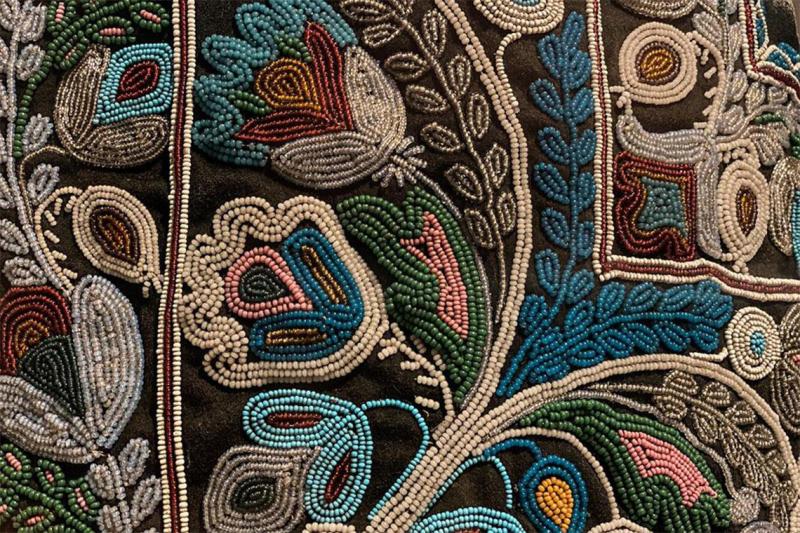 “I started out in archaeology and wondered why it was that I and so many other native friends and scholars were doing work in either anthropology or archaeology,” says Bos, an assistant professor in the department of historical studies at the University of Toronto Mississauga.

At the time, Bos, who is Métis from Treaty 8 territory in Northern Alberta, was studying medieval sexuality for her master’s degree at the University of Oxford.

“There is an enduring focus on us and our histories, and I just got really frustrated because it turned out there were a lot of people at Oxford studying Indigenous folks, but there were no Indigenous people doing that work there,” she says. “I decided I should do that work – and do it in a better way.”

Bos’s first research undertaking in the field of Indigenous studies was at the Pitt Rivers Museum. Based at Oxford, the museum houses over 500,000 photographs, manuscripts and objects from around the world. Bos was examining beaded panel bags. It was her first serious initiation into material culture.

Tiny glass seed beads have since become a central part of her research focus. Seed beads have been used by Indigenous communities for thousands of years. They vary in size, but usually measure no more than five millimetres – a bit smaller than a sesame seed. Bos says that seed beads tell stories, govern lands and they have been used as currency in many transactions in the past.

Though Bos’s main focus is on Indigenous feminisms and seed beads, science, technology and toxicity also factor prominently into her work. For example, she looks at how beads have often been preserved using harmful chemicals since the 1700s – and how that toxicity pervades today.

I'm thinking about beads as earth works: [made from] sand, ashes, stone, flora and fauna

“The main work I'm doing with beads is thinking about them also as earth works,” says Bos, who is co-director of the Indigenous-led Technoscience Research Unit and holds a graduate appointment at U of T’s Women & Gender Studies Institute. “So, beads as glass, and glass as silica or sand, glass as potash or the ashes of plants, glass as limestone or the calcified remains of flora and fauna.”

She explains this ties into other Indigenous feminist scholarships, such as Métis anthropologist Zoe Todd’s work on thinking of oil petrochemicals as a kind of fossilized kin and thinking about the kind of relationships we can build, noting these substances weren't toxic before, but under settler colonialism and with certain technologies they become toxic.

Throughout her work, Bos has encountered curators and archivists who now either refuse to go into collections because of this chemical contamination or who have donned personal protective equipment while working with these materials. This is another area she is zeroing in on in her research.

Beads are storytelling devices and a visual reference to colonization that help to frame our history, while also representing Indigenous futures

Bos, who has beaded since she was young, says that seed beads and Indigenous art more generally are having a bit of a moment right now.

“I think about beads as method, beads as a research subject, beads as witnesses, and beads figure in some of the most famous and really pervasive settler colonial narratives,” says Bos, who adds that the founding of the League of Five Nations treaty, the land on which U of T Mississauga currently stands, was made from wampum, which are small cylindrical beads made of various kinds of shell.

“Beads are storytelling devices and a visual reference to colonization that help to frame our history, while also representing Indigenous futures.”