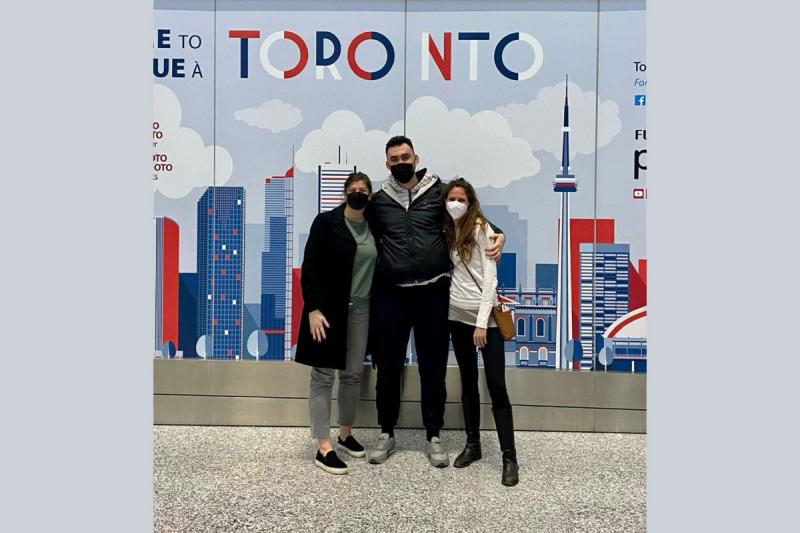 A lot of things can change in ten years – just ask anyone reflecting on a milestone school reunion, like the Master of Global Affairs (MGA) alumni who are celebrating a decade post-graduation.

It’s not just a significant occasion for the 33 graduates of the Munk School of Global Affairs and Public Policy's Class of 2012 – as the inaugural cohort of the MGA program, the anniversary has special meaning for University of Toronto faculty, advisors, and administrators, too. What began as a novel idea to initiate a professional master’s program for students of global affairs, going beyond theory to merge multidisciplinary instruction and practice; has now grown to include a community of over 665 alumni.

Those alumni have made important impacts in their respective – and diverse – fields over the past ten years. The Class of 2012 demonstrates that variety in achievement: they have carved out niches for themselves in a variety of fields spanning the world, from prominent international organizations, like Daron Bedrosyan (MGA 2012) at the World Bank; to founding their own non-profits, like Dana Wagner (MGA 2012); to gaining expertise and recognition as a policy researcher, like Fariya Mohiuddin (BA 2010 TRIN, MGA 2012).

Such variety in post-graduate paths among graduates is not coincidental – the Munk School has always aimed to foster an educational ecosystem that could support grads in an economy that no longer provides straightforward career paths and awards flexibility and innovation.

Their reasons for entering the MGA program are just as diverse as their paths. For Bedrosyan, who is now an Energy Specialist at the World Bank in Washington, DC; helping countries transition away from coal power, he wanted a program that could round out his education after a business undergraduate degree. “I wanted to get into international trade, and so I needed to familiarize myself with policy and international relations – the Munk School always had a very good reputation for that, even outside of Canada and in international organizations.”

Wagner, a classmate of Bedrosyan’s, came from a liberal arts background and chose the Munk School in order to expand beyond theory, into practice. She says, “I was looking for an international relations and policy program with real-world application. I wanted to leave knowing the levers available to solve a global problem.”

She highlights classes with professors including Jutta Brunnée and Michael Ignatieff as sparking her interest in finding solutions for the global refugee crisis. Since graduation, Wagner has co-founded her own non-profit venture, TalentLift, which matches skilled and talented refugees with Canadian employers.

Other MGA’12 grads have chosen to dive deep into specific and technical fields that impact global development. Mohiuddin discovered a passion for researching how tax policy can be deployed to reduce inequity, and is now a Senior Program Officer for the International Budget Partnership in Berlin, Germany; focusing on property taxation in West Africa and the link between taxation and accountability.

[My prof] hands down changed the trajectory of my career

Mohiuddin says that if she was advising a prospective applicant now, she would tell them about the strength of the community and network of the Munk School: “Whether you’re just getting started in your career or you’re changing career paths, whether you know exactly what you want to do, or you have no idea what you want to do; there’s so many good people in this network. From alumni, to faculty to admin, there are people to help guide you along the way.”

For Bedrosyan, being a part of the inaugural class of MGA grads has inspired his commitment to giving back to that network – from reviewing resumes, to meeting up with students completing their internships in DC. He sees engaging with students as a way to give back to the MGA community; a growing network that helped him in his own career.

Bedrosyan began working for the World Bank after he completed his required summer internship, an opportunity he was encouraged to apply to by Paul Cadario, a Munk School fellow and former World Bank staffer. Bedrosyan credits the Munk School’s fellows and professors with helping him navigate the world of international organizations and with the dynamic coursework that refined his specialization in energy policy.

All three graduates from the Munk School’s inaugural graduating class highlight a common thread: despite being the first cohort, students had access to a diverse, ambitious, and supportive community from the outset of the MGA program. As Wagner describes, joining the Munk School’s network is to surround yourself with people who say yes. After all, she says, “yes-people change things.”