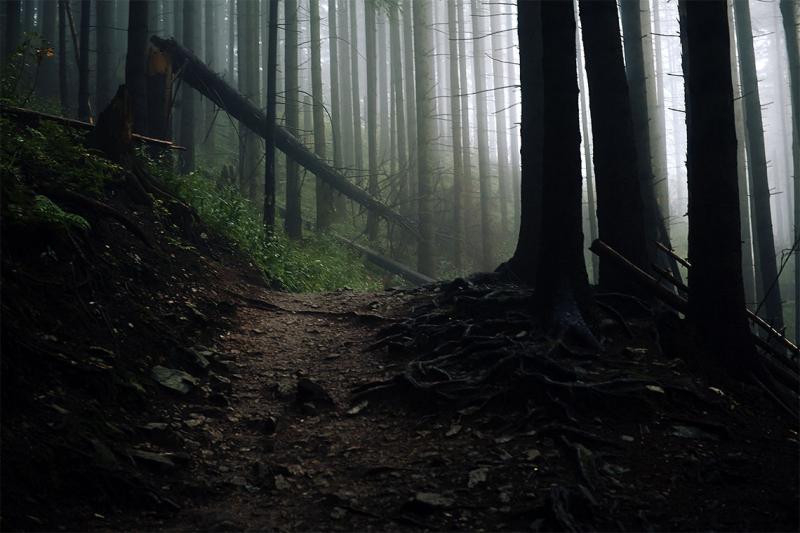 U of T psychology researchers have shown that linear features in a scene allow us to quickly assess threats, with vertical or angular lines such as those found in a forest signalling potential danger (photo by Pawel Wewiorski via Getty Images)

Researchers at the University of Toronto have shown that our ability to quickly assess threats in our environment comes from our perception of discrete linear features in a scene rather than details or objects within it.

The collaborators suggest that this response is an evolutionary trait that may have evolved in humans and other species because it helped identify potential danger quickly – that is, individuals with this visual skill were more likely to avoid danger and hence pass the trait on to their offspring.

The team from the department of psychology in the Faculty of Arts & Science determined that smooth, long, horizontal lines signaled safety, while more angular, vertical lines signaled danger.

They suggest that this may have arisen because horizontal lines equate to wide-open spaces like a savannah or beach where a threat can’t hide or is visible from far away and thus can be avoided. On the other hand, angular lines and shapes common in scenes with rocks, uneven terrain and vegetation are associated with potential hiding places for a predator.

From a survival standpoint, it's more important to quickly understand the scene as a whole

“Previous research had already found that angular linear elements were related to threats because they were associated with individual objects like snakes, thorns or something similarly threatening,” says Claudia Damiano (MA 2015, PhD 2019), who is lead author of a paper describing the results of an experiment she and collaborators conducted when she was a PhD candidate in the department of psychology.

“But once you already see an object is a snake, it’s probably too late. So we took a step back and showed that from a survival standpoint, it's more important to quickly understand the scene as a whole.”

The study was recently published in the Nature journal Scientific Reports. Damiano, who is currently a post-doctoral fellow in the department of brain and cognition at the Katholieke Universiteit Leuven (KU Leuven) in Belgium, co-authored the paper with Associate Professor Dirk Bernhardt-Walther and Professor William Cunningham – both in U of T’s department of psychology.

“We have known for some time that people can quickly respond to emotional content – in far less than a second,” says Cunningham. “But we don’t really know how people can do this for complex stimuli. This research provides a hint that maybe we use cues that begin a response before we fully know what we are looking at.”

The researchers conducted their study using photographs from the International Affective Picture System (IAPS). IAPS is a database of nearly a thousand widely differing images, from a person on a beach or a piece of furniture to the scene of a natural disaster.

Previous research had determined an emotional response for each IAPS image in three ways: how pleasant or unpleasant they made the viewer feel; how intensely the viewer responded; and whether the images evoked feelings of being in control or helplessness.

“When you have a wider view, you can also navigate through open landscapes and flee much easier than if you were surrounded by undergrowth or rugged terrain,” says Bernhardt-Walther.

Damiano and her colleagues created line-drawing versions of IAPS images, stripping them of information like colour, texture, recognizable objects and other details. The drawings were created based on Bernhardt-Walther’s previous research into which discrete lines are important to our visual perception of a scene.

They then asked over 300 participants to rate the new drawings – positive or negative, safe or threatening – and found the participants characterized images in the same way as the original photographs. Drawings with smooth, long, horizontal lines were rated as positive and safe; images with short, angular lines were rated as negative and threatening.

“We created scenes without certain types of visual content,” says Bernhardt-Walther. “And those images with ‘low level’ features were enough to trigger emotional responses. This shows that these specific features in a scene help humans make judgements about potential threats in the environment.”

While the trait is one that may have evolved as a survival skill, the co-authors also see possible connections to how humans respond to what we see today. They suggest that it could explain why we like the appearance of certain things – for example, why we respond the way we do to different architectural spaces or art.

“Studies have found that people generally prefer paintings of landscapes over other types of subjects and that this is consistent across all cultures,” says Bernhardt-Walther.

“Perhaps the reason we like landscapes with horizontal lines is because we evolved on the savannah and those scenes ‘remind’ us of our ancestral home.”