High academic standing is expected of the winner of the John H. Moss Scholarship. With a 3.87 Grade Point Average at U of T and three top-of-class finishes at Sciences Po in Paris, Jozef A. Kosc can comfortably lay claim to suitable credentials.

But it is his vast extracurricular resume that distinguishes this history and political science major from Trinity College as an unusually qualified Moss laureate. Among the positions he has held are editorial assistant for the Organization for Economic Cooperation and Development (OECD), president of UN Youth Canada, junior research fellow for the NATO Council of Canada, international security analyst for the Atlantic Council of the United Kingdom and marketing manager for the Paris Globalist Magazine. Add publications, projects, scholarships and debating championships and you have what seems the portrait of an energetic scholar in mid-career rather than fourth-year undergraduate.

Much of Kosc’s experience is down-to-earth. He started life in what he calls a cramped apartment in Toronto, as the son of refugees and pro-democracy organizers from Soviet-era Poland. Growing up, he acquired an appreciation of the freedoms enjoyed by his fellow Canadians. By the time he reached grade 12, Kosc had started to think of a career in public service.

His resolve was crystallized in a most unexpected way in the summer of 2013 as a visiting student at the University of Cape Town, School of Education. While returning from a township school, Kosc was assaulted by an armed young man who was not much older than his students. “In hindsight, it was this jarring experience that transformed diplomacy from an option into my chosen career path, and cemented my interests in the work of international security and development,” Kosc says.

Working in South Africa gave Kosc a sense of how literacy develops in multilingual societies. In the previous summer he was an exchange student at the Rothberg International School at the Hebrew University of Jerusalem, maintaining his customary A average. Extensive backpacking in the Middle East exposed him to the fragile nature of security and the need for international cooperation.

A member of the Hart House Debating Club, Kosc applied his rhetorical skills so successfully abroad that he gave addresses as part of the Sciences Po team in the French Assemblée Nationale and at the British Ambassador’s residence in Paris, propelling the team to victories unseen in 16 years. In Brussels last May, under the auspices of the Atlantic Council, Kosc was the world’s youngest student to be invited to hear briefings on the Ukrainian crisis along with NATO, European Union and military officials at NATO headquarters. Prior to this, on the basis of national and international selection processes, Kosc participated in briefings at the Nuclear Knowledge Summit in Amsterdam, and the UNESCO General Conference in Paris.

Despite all this travel, Kosc has found time to publish over 30 different essays and commentaries in various peer-reviewed journals and other publications, including the Toronto Globalist, a U of T student journal; the Journal of International Relations, Peace Studies and Development; and a chapter on South African literacy in the recently published book Modern Dilemmas: Understanding Collective Action in the 21st Century. He has presented his published work at graduate-level conferences in Paris and Bucharest. Professor Derek Penslar, Samuel Zacks Professor of Jewish History at U of T, says that a Kosc course essay comparing missile defence doctrine in the United States in the 1980s with Israel’s “Iron Dome” program could – with further research and elaboration – be considered for publication in a reputable scholarly journal. Professor of Philosophy and former Trinity Dean of Arts Derek Allen notes Kosc’s confidence in dealing with challenging readings by contemporary analytic philosophers.

The John H. Moss Scholarship was first awarded in 1921. This scholarship is presented along with several other faculty, staff and student awards under the banner of the Awards of Excellence. This award program annually recognizes the outstanding members of the University of Toronto community who have made rich and meaningful contributions to the University, their communities and to the world.

Jozef Kosc and the other 2015 Awards of Excellence recipients will be honoured at a ceremony at the Isabel Bader Theatre on April 13. 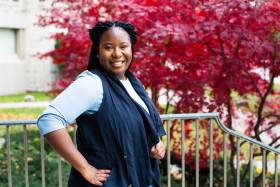