Plus, find out how some U of T alumni are keeping the project alive. 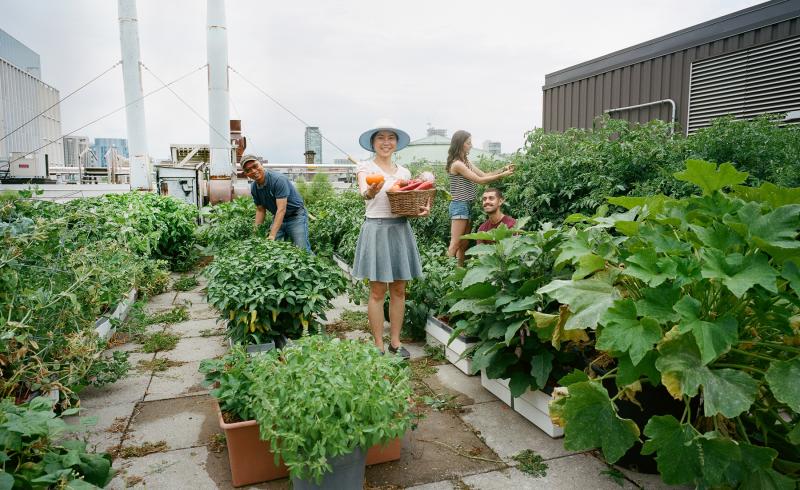 To feed Toronto, we must import more than 6000 tonnes of food every single day. As a result, more than 30 per cent of Toronto's environmental footprint is food-related—including the impact of shipping, pesticides and packaging. In fact, Toronto's food footprint affects the environment even more than its car traffic. And the reliance on imports also comes with a social cost: for those in poverty, fresh, organic produce can be hard to access.

But atop an engineering building at the University of Toronto, students are conducting a living experiment in doing food differently: one of the city's biggest and most innovative food-producing rooftop gardens.

For more than eight years, Sky Garden's student and alumni volunteer farmers have planted, watered, weeded, and harvested produce on the bright, windswept rooftop of U of T's Galbraith Building. Their yield clocks in at an impressive 500 pounds of fresh, organic produce a year, and they send more than half of it directly to nearby Scott Mission—so that people in need can receive hot meals made with organic, locally grown produce.

“The garden takes inanimate concrete and transforms it into something that’s growing things,” says Matt Stata, a PhD student in the department of ecology and evolutionary biology, who helps oversee the project.

“It’s an example of what's possible. There are so many unused roof spaces in Toronto that could be producing food.”

“It’s an example of what's possible,” says Stata. “There are so many unused roof spaces in Toronto that could be producing food... and so many people who would love to garden, but don't have any space to do it. And the people at Scott Mission are ecstatic when we bring over bags and bags of fresh produce. There's a real need.”

That vision is shared by U of T's affinity partners and alumni, who help fund the Sky Garden project. When alumni use a U of T MBNA credit card, or sign up for insurance through Manulife or TD Insurance, these affinity partners contribute a portion of the proceeds to Sky Garden—as well as to other key U of T alumni and student initiatives that are making an impact on our community.

Sky Garden is catching on: its volunteers have been called on to help set up similar rooftop gardens for other Toronto buildings and residences.

Rooftop gardens are a compelling idea because they offer all the benefits of a conventional green roof—stormwater retention, heat reduction, and air quality improvement—but with the added benefits of producing food, building a stronger sense of community, and helping connect people to food, nature, and each other.

Of course, farming on a roof comes with its challenges. Sky Garden's volunteer farmers use special, lightweight semi-hydroponic containers (featuring only a thin layer of soil) instead of covering the whole roof in soil, to ensure the farm doesn't exceed the roof's weight limit—since older roofs like Galbraith's can only bear so much.

They've also learned to cultivate shorter plants, as tall plants such as sunflowers can be bowled over by the strong rooftop wind. "We're actually growing corn this year," Stata says, "but it's a dwarf variety."

Plus, not all produce works out. "We can't seem to grow kale," Stata muses. "We don't get too many pests up here, but for some reason, aphids just go bonkers for our kale."

When you use U of T alumni financial services, you support Sky Garden too. Learn more »

But with every year that passes, the students have learned more and more about rooftop farming.

Give pumpkins and squash a few buckets to stretch out in, like they would in a real field.

Rip out plants as soon as they've stopped producing, and replace them with ones that are ready to produce—that way you use your containers more efficiently, and get a much bigger yield.

And don't even think about hand-watering and hand-fertilizing—it might work for a small garden, but it isn't viable for a farm of Sky Garden's size. Instead, the students installed an automated drip irrigation system, so each plant can suck up as much fertilized water as it needs, without drowning or drying out.

Sky Garden has also become a hub for other urban agricultural experiments. It's home to a year-round beekeeping operation, a solar-powered fruit dehydrator, and an array of unusual and heirloom produce—from ghost-white pumpkins to blue (yes, blue) tomatoes.

It's home to a year-round beekeeping operation, a solar-powered fruit dehydrator, and an array of unusual and heirloom produce—from ghost-white pumpkins to blue (yes, blue) tomatoes.

Student farmers are also trained in seed collection and preservation, and are encouraged to grow their own pet projects. In 2018, Sky Garden is hosting a student's struggling goji berry plant, testing out baby bok choy, and tackling their very first crop of mushrooms—grown in buckets of used coffee grounds, acquired "from a deal we struck with the local Second Cup," says Stata.

And the results have been mouth-watering. "There's a noticeable difference between our melons and grocery store melons," says Stata. "By letting our melons ripen on the vine, they're so much sweeter."

But the sweetest thing of all, according to Stata?

"Seeing how excited the students are to learn."

When alumni use financial services from Manulife, MBNA and TD Insurance, these affinity partners give a portion of the proceeds to Sky Garden and over 50 other U of T student and alumni initiatives every year. Plus, alumni receive great preferred rates negotiated by U of T.