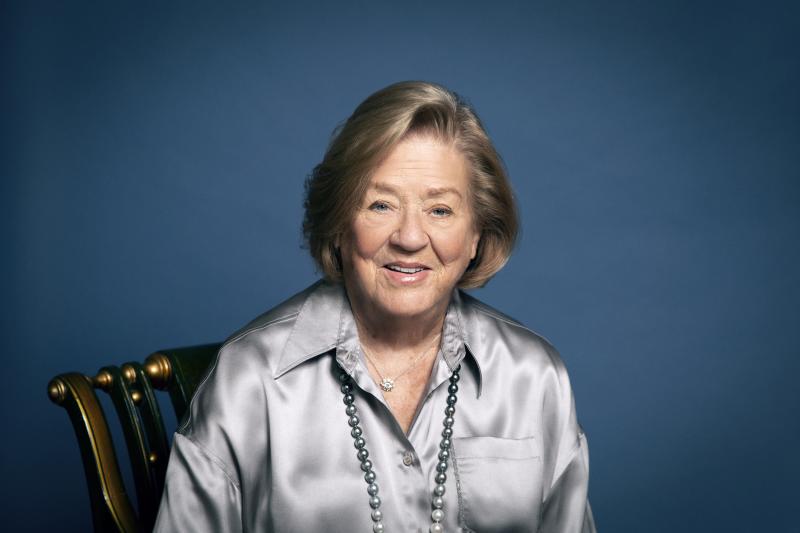 Watch Margaret McCain's acceptance speech and read excerpts from her candid interview with U of T.

The Honourable Margaret L.A. Norrie McCain (BSc in Social Work 1955, Hon LLD 1996, Hon DLitt 2004), a champion of strong families and child development, is the 2021 recipient of the Rose Wolfe Distinguished Alumni Award. McCain, a University of Toronto alumna and long-time volunteer with the University, has worked for almost 25 years as a national advocate for early childhood education.

“On behalf of the University of Toronto community, I am delighted to congratulate the Honourable Margaret McCain on receiving the Rose Wolfe Award,” says U of T President Meric Gertler. “Through her lifetime of public service, philanthropy and volunteer leadership at U of T and across the country, Dr. McCain has made a major difference for the better in the lives of countless children and others in our society.”

“Margaret McCain embodies the values and principles championed by Rose Wolfe and the highest ideals of the University of Toronto,” says Dr. Rose Patten, Chancellor of U of T and chair of the Rose Wolfe Award selection committee. “Her extraordinary record of service to the University and to Canada is an inspiration to us all, and her tireless advocacy for early childhood education will make an impact for generations to come.”

While Margaret McCain is known today as one of Canada’s leading child advocates, she has also been active throughout her life in organizations that promote women’s rights, social equality, education, and the arts. In New Brunswick, she was a founding member of the Muriel McQueen Fergusson Foundation, whose mission is to eliminate family violence through public education and research. McCain chaired the Foundation and established the Muriel McQueen Fergusson Centre for Family Violence Research.

“It’s truly an honour to receive this award,” says McCain. “I’ve always been an admirer of Rose Wolfe, and I’ve always believed in the power of higher education. U of T is the best school in Canada and its faculty of social work is among the best in the world. It’s been awe-inspiring to see how far U of T has come since I was a student here. The students and faculty of today never fail to inspire me, and I want to thank U of T and the UTAA for this honour.”

A post shared by U of T Alumni (@uoftalumni)

Since the 1990s, McCain has participated in numerous early child development policy and program initiatives in Canada and is frequently asked to speak at conferences and to governments across the country. Along with the late Fraser Mustard, she co-wrote the original Early Years Study in 1999, which recommended ways to improve early childhood development in Ontario. Three reports followed, recommending a network of community-based, province-wide early childhood development and learning centres. With new, recent commitments from the federal government, McCain and her colleagues’ decades of advocacy and recommendations are finally coming to fruition through a Canada-wide early learning and child-care plan.

“Margaret McCain is among our most esteemed—and hardworking—alumni,” says Sana Halwani, President of the UTAA. “Her lifetime of work has had broad-reaching impact, and she is an inspiration to others both professionally and civically. She has provided exemplary leadership to the U of T community for decades through her myriad fundraising and advisory roles. We’re proud to count her as a member of our global community of alumni.”

From 1974 to 1994, McCain served as Chancellor of Mount Allison University, and in 1994 she was invested as Dame of Grace in the Most Venerable Order of the Hospital of St. John of Jerusalem. From 1994 to 1997, McCain was Lieutenant-Governor of New Brunswick, having earned a reputation for fighting family violence both in the province and across the country. She was the first woman to hold the position. Her decades of work for various social causes have been recognized with numerous honorary degrees from Canadian universities.

Margaret McCain and her late husband Wallace McCain are among Canada’s most generous philanthropists, having provided significant support to institutions such as the CAMH Foundation, the Princess Margaret Cancer Foundation, Dalhousie University, the University of New Brunswick, and the National Ballet School—among many others. At the University of Toronto, the McCains’ support has been directed to OISE, the Dr. Eric Jackman Institute of Child Study, and the Factor-Inwentash Faculty of Social Work, where they established the Margaret and Wallace McCain Family Chair in Child and Family in 1996.

“Margaret McCain is an exceptionally warm, caring person, always willing to lend her time and advice to the causes she cares about—which are many,” says David Palmer, Vice-President, Advancement. “The lasting and positive impact she has had on the lives of countless others, through her commitment to social issues and education, place her among our most influential and respected U of T graduates. She is an extremely deserving recipient of the prestigious Rose Wolfe Award. Congratulations, Margie.”

You can read an interview with Margaret McCain here, where she discusses her life as an advocate for healthy child development, how the COVID-19 pandemic may have affected Canadian children, and what she would do if she got to relive her life.