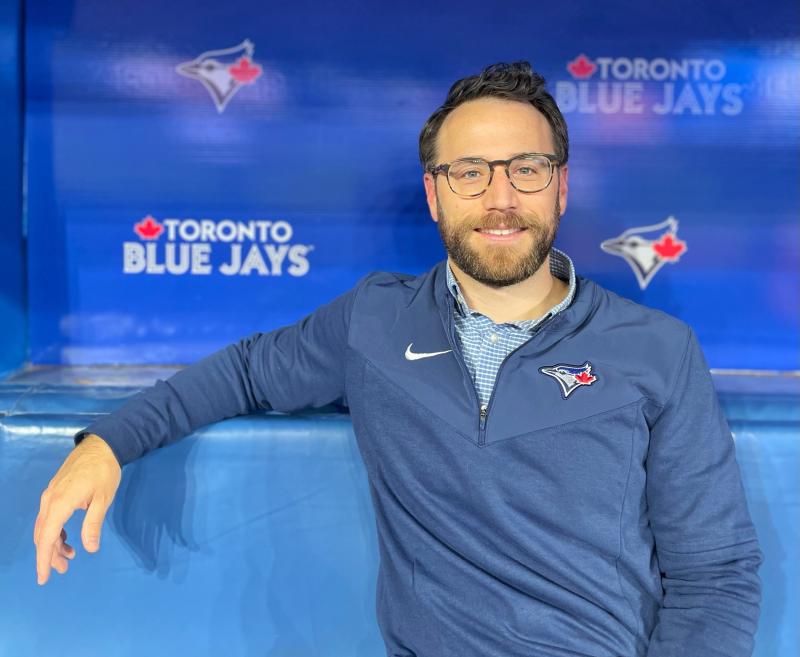 David Lawrence (MD 2013, PGME 2016, MPH 2019) is the medical director of the David L. MacIntosh Clinic at U of T’s Faculty of Kinesiology & Physical Education, an assistant professor in U of T’s Department of Family and Community Medicine, the assistant medical director at the Dovigi Orthopedic and Sports Medicine Clinic at Mount Sinai Hospital… and the lead primary care physician for the Toronto Blue Jays.

Growing up in Toronto, I loved baseball. I played in a city neighbourhood league out of Christie Pits — even making the cut for the touring team that travelled all over Ontario.

As a family, we also went to most of the Toronto Blue Jays’ Saturday home games. Tickets were $2 back then, and the team was in their prime. I remember Joe Carter visiting our school shortly after his World Series-winning home run back in 1992. He was a national hero, and I’m sure I wasn’t the only one in my class dreaming about one day joining the Jays and potentially being part of Major League Baseball (MLB) history.

Little did I know that 25 years later I would have that chance — not as a player, but as the Jays’ lead team primary care physician, contributing to the team’s success in ways I would never have imagined possible.

So, what’s it like being the Jays’ family doctor? People are often surprised when they find out, so let me start by dispelling a few myths.

Myth 1: I manage only sports injuries

While I’m a sports medicine specialist and provide guidance in the diagnosis and management of sports injuries, my role with the Jays also focuses on providing primary care services. In my five seasons as the Jays’ doctor I’ve diagnosed plenty of non-sports related conditions. I am also primarily responsible for developing medical protocols to help keep our athletes safe and healthy, including preseason testing, infectious disease protocols, emergency action plans, biological interventions, ultrasound procedures, etc.

Myth 2: I only work at the Rogers Centre

I spend two weeks with the team in Dunedin, Florida during spring training, and I’m expected to attend half of their home games to manage any medical emergencies, but most of my work happens off the field and even outside of the stadium. I work around the players’ schedules, so appointments are rarely during regular working hours. Like many primary care physicians through the pandemic, I’ve also been able to conduct many appointments virtually.

Myth 3: The players are my only patients

As the Jays’ sports medicine physician, I’m also the Jays’ families’ physician — my services extend to the players’ spouses and children, many of whom aren’t familiar with Toronto or even Canada. Living in a large, multicultural city like Toronto has prepared me well to service the Jays’ families’ diverse needs.

Myth 4: I travel with the team during the regular season

Other than two weeks of Florida spring training duty and away games during playoffs, I’m Toronto-based. In the MLB, home team doctors are responsible for the medical needs of both teams. If the Jays are on the road and there’s an emergency, they receive care from their opponents’ doctor; and similarly, when visiting teams are in Toronto, I am on call for them as well.

I have several medical responsibilities that complement and support one another. I hold an appointment as the medical director of the David L. MacIntosh Sports Medicine Clinic at the University of Toronto’s Faculty of Kinesiology and Physical Education, and part-time appointments with Mount Sinai’s Dovigi Orthopedic and Sports Medicine Clinic and Temerty Medicine’s Department of Family and Community Medicine.

These roles overlap significantly in their scope, and insights gained from one area can be transferred to benefit the others. I likely couldn’t provide the same level of primary care to the Jays if I didn’t have my “day jobs.” There have been many instances where what I’ve learned in my sports medicine work impacts on my primary care patients, and vice-versa.

For example, when COVID hit, professional sports were impacted in a big way. Testing protocols for athletes were incredibly strict, which we then leveraged for our U of T varsity athletes.

The front lines of concussion research

Through my U of T appointment, I’m also on the front lines of concussion research. Understanding concussions and their impact on a patient’s day-to-day life, as well as possible treatments, is crucial in my role with the Jays.

Within concussion, about 10 per cent of patients have a protracted recovery, with symptoms persisting long after their initial injury. Many of these patients have a contributing affective and mood component, and to date there is no single gold-standard treatment to help them. I see tremendous potential in recent advances in psychedelics. Growing research is identifying a role for psychedelics, in combination with psychotherapy, in the management of mood disorders. Moreover, some psychedelics may have a neuroprotective effect, for example with anoxic brain injuries like a stroke. I think there are parallels there with brain injuries caused by physical trauma, like concussions.

I also took on another new non-medical responsibility this year — I became a father to a now four-month-old son. I’m excited to see how being a parent also enhances my medical practice, and to one day watch my son cheer on the Blue Jays like I did.

The best job in the world

So, now that you know what being the Jays’ doctor isn’t, let me tell you what it is. It’s the best job in the world, of course! I get to work with an amazing team of people, including the best trainers, physiotherapists, strength and conditioning coaches, nutritionists, mental performance coaches, surgeons, analysts, sport coaches, managers, front office staff, statisticians, and support staff.

Some may see my schedule as overloaded, but I see it as being rich with opportunities to care for people who are performing at an elite level both physically and mentally, and who mean a great deal to the millions of Jays fans around the world.

In fact, I expect to be even busier as we head into October and the Jays hopefully secure a spot in the playoffs — I hope you’ll be watching and cheering us all on.