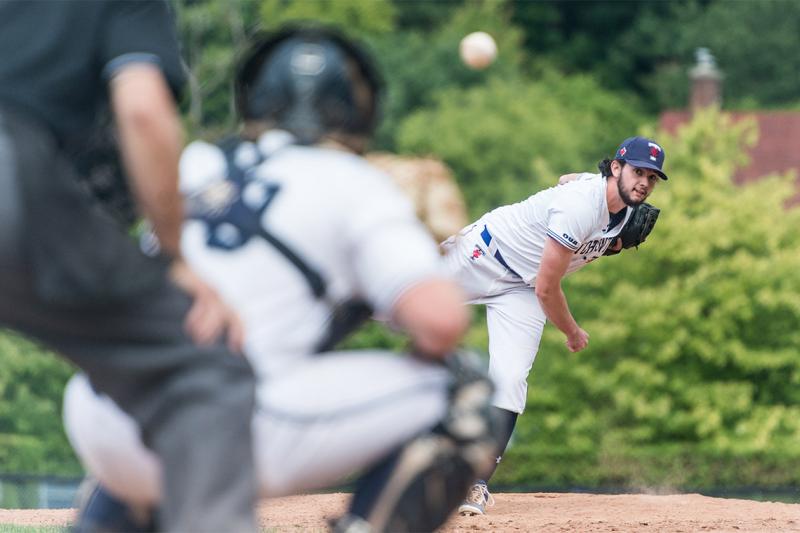 Conall Helverson (BA 2022 SMC) has much to be proud of as he looks back on his time at the University of Toronto – including a GPA of almost 4.0.

Helverson can also take pride in a perfect five wins and zero losses as a starting pitcher for the Varsity Blues baseball team in 2021, an Ontario University Athletics All-Star selection, and an OUA championship ring.

Helverson is a member of St. Michael’s College and is graduating this fall with majors in both history and philosophy of science and technology, and book and media studies.

A right-handed pitcher, he played baseball in high school and had offers from American universities to join their programs. His goal? To play in the majors. But an elbow injury in Grade 12 not only interrupted his baseball dreams, it also waylaid his academic plans. Because of the time he missed due to his injury, he didn't have the grades he needed to enter the computer science or engineering programs he was considering.

After much rehabilitation and hard work, Helverson became co-captain of the Blues and a star player. He also closed out his academic career at U of T on a high note, too.

Helverson recently spoke with writer Chris Sasaki about his fall convocation and accomplishments on and off the field.

How does it feel to be graduating?

I feel proud. There were times during my first two years when I thought I wasn’t going to make it unless I turned things around. So, I went from not showing up for class, not caring and doing below-par work – to working hard, doing well and finishing with a grade point average that I’m very proud of.

Can you tell us more about your history and philosophy of science and technology program?

It was fascinating. We learned about early diseases and how the practice of medicine grew. I was personally interested in this because I have Crohn’s disease and I started thinking about how it all applied to me. Crohn’s is an autoimmune disease and there's no cure for it, so I started thinking how rewarding it would be to be a part of a research team working to find a cure or treatment.

I don't necessarily want to be a doctor, but I’d enjoy being part of a biotech research team that works in that field. That’s why I eventually want to do a master's, either in experimental medicine or biotechnology in the medical and public-health technology sphere. What’s more, any advancements in treating or finding a cure for Crohn’s would be applicable to any other kind of autoimmune disease, cancers and so on.

In your second year, you joined Professor Paolo Granata’s Media Ethics Lab. What led to that?

In my first year, I took Professor Granata’s McLuhan seminar in creativity and technology – and, as part of the course, we went to Silicon Valley and went everywhere. We toured LinkedIn, the Intel Museum and Apple’s headquarters. I really enjoyed it. Then, he suggested I might like doing a book and media studies major. So, that’s what I did.

I also joined his Media Ethics Lab and that was an incredible experience. We worked in teams and were assigned different topics: digital media, digital societies and digital cities, which is what my team worked on. We studied questions like: What is a digital city? What are the dangers related to surveillance? What threats are there to personal freedom and privacy? It was fascinating.

What was it like to play on U of T’s Varsity Blues baseball team?

It was great. I didn’t play my first year because I was still injured. But I just kept working hard through the pain and by my second year, I’d built my arm back up and taught myself to throw again. I got to where I was able to throw an inning or two at a time, so I was the closing relief pitcher. I didn’t give up a single run that season and made the all-star team and it kind of built from there. The next year was COVID, so no baseball. But in 2021, I became a starter and ended up 5 and 0. The team had a perfect season and we won the championship.

But more importantly, I was one of the co-captains on the team that season. We were the leaders of the team, rallying the guys, keeping them on the right track. To me the key was: even if you’re the best team talent-wise – which we were – we had to work like we were the worst team. Stuff like that was what I took the most pride in. It was probably the best four years of baseball I’ve ever experienced.

Looking back on your undergraduate years, what advice would you give yourself as a first-year student?

Go easy on yourself. It’s in my nature to be very hard on myself and, as an athlete, be very competitive and a high achiever. But I stressed myself out, having to have a plan, having to know what I’m doing at every moment, having to have the best marks. I was very hard on myself at a time when I was just trying to figure out who I was and what I wanted out of life. I was comparing myself to the people around me and it seemed like they were all doing a lot better than me. As a result, I didn’t let myself enjoy things.

So, if I could go back and tell myself anything, it’d be: “Go easy on yourself. Everyone has their own path. It’ll all work out. Enjoy it because it goes by quickly.”