'Each time I set foot on campus I feel re-energized': Reunions and revisiting the past 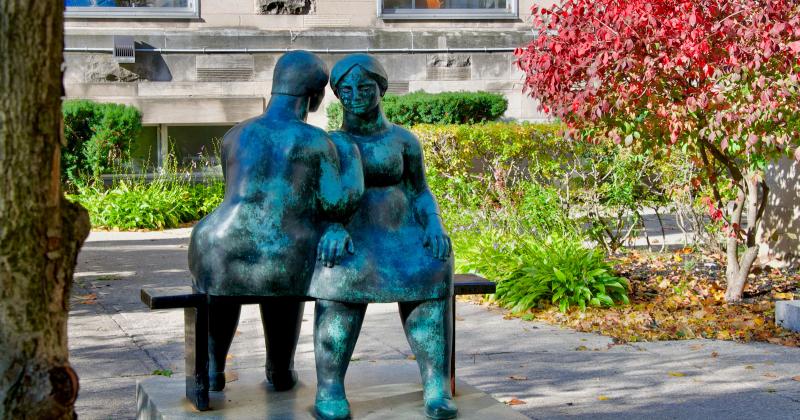 Catherine Mulroney (BA 1982 SMC, MDiv 2010 USMC) is a big fan of her alma mater — so much so that now she works at St. Michael's College in the University of Toronto.

I remember watching my mother (Barbara Hood, BA 1945 SMC) getting ready for her 25th reunion and thinking, “I’ll never be that old.”

Today, I am staring down my 40th and wondering, needless to say, where the time has gone.

My mother (who, for the record, would want me to add that she was just 19 when she graduated) loved her time at St. Mike’s. She remained amazed that her own mother lasted just one day here before transferring to University College. Being a woman in university during the 1920s would be challenging enough, my grandmother felt. As a French Canadian woman, she felt a non-Catholic college might help her get ahead in a still very Anglo Toronto. And so she picked up and crossed Queen’s Park, a move, my mother felt, that was her loss.

My mother’s memories recalled a very different place than the St. Mike’s I experienced. In her Latin class, for example, the seminarians sat apart on one side of the classroom, while the other students – and particularly the female ones – sat across the room. Most of the students with whom my mother interacted were also Catholic, and St. Mike’s was small enough that almost everybody knew each other.

She always had something topical on display outside her office, such as how to write letters of support to the Mothers of the Disappeared in Argentina

By the time I arrived in 1978, the world had greatly changed. Vatican II had shaken up the Church, so the communion rail in St. Basil’s Church where my mother had knelt was long gone. The increasing options open to women meant that the Sisters who were the first women to teach at St. Mike’s were increasingly joined by lay female colleagues. And when the boy I had a crush on in Fr. Leland’s 1st-year Major British Writers class made a move to brush ashes off my forehead I realized that, unlike my mother’s St. Mike’s, my classmates were not all Catholic.

My St. Mike’s was increasingly engaged with the outside world. I recall an all-candidates’ meeting in Brennan Lounge that included candidate George Hislop, a high-profile gay activist, in an era when broader acceptance of the LGBTQ community was still in its infancy.  Campus Minister Sr. Diane Bridges, IBVM, always had something topical on display outside her office at the north end of Brennan Hall, whether it was instructions on how to write letters of support to the Mothers of the Disappeared in Argentina or on the ongoing struggles of the California grape pickers.

I was taught by many of the greats, including Fr. Madden, Msgr. Synan, and Dr. Colin Chase, who had a particular influence on me, offering suggestions when I was in fourth year about a career in journalism, a world away from Old English and Chaucer. His mother, he told me, had been a journalist. Modest to a fault, what he didn’t tell me was that his mother was Mary Coyle Chase, author of the play Harvey, which had been made into a wildly successful film with Jimmy Stewart.

In yet another of university’s life lessons, I watched the man whose fiery oratory had terrified me as a child now playing pool with students

Fr. John Kelly, by then retired, was still a force on campus. In yet another of university’s life lessons, I watched the man whose homilies had terrified me as a child because of his fiery oratory skills now socializing with students, sometimes playing pool or having a beer, and realized there was so much more to the man.

I recall a Christmas wine and cheese party my first year during which a very elegantly dressed man began to chat with me.

“And what do you do at the university?” I asked, with a naivete I’ve never really shaken. “Oh, I’m Fr. Swan,” he replied, and when that didn’t register, he added “the new president….” I remain chagrined to this day.

The St. Mike’s connection has carried forward into my post-graduation life. For example, when my husband and I first needed an accountant, a neighbour passed on a name. When I walked into Roger’s office, I realized I used to see him almost daily in the old Brennan Hall lounge. My first thought was that if we’d been in school together, he couldn’t be old enough to do my taxes, followed by the realization that, if I were old enough to have my taxes done, he was old enough to do them.

The St. Mike’s I returned to in 2004 to work on a Master of Divinity degree was different again. If I recall correctly, the Faculty of Theology,  once a male bastion, now had more women enrolled than men. You could now eat in the Kelly Library and the statue of St. Michael in the quad had a feeling of permanence, having long since shaken the mantle of being the shiny new thing on campus.

I’ll be thinking of my former classmates, wondering, for example, whether the guy who used to look just like Sting still does

Today, I am lucky enough to work at St. Mike’s and witness first-hand the ongoing engagement of students, faculty and staff with important issues. Working in the communications department, I have had the privilege of talking to young adults, for example, about projects promoting sustainability, the need to fight anti-Asian racism and the happiness of Muslim students upon discovering that the Canada Room was making special dietary schedules and meals for Ramadan. When chatting with professors, the topic may be new classes on everything from Indigenous issues to the cultural impact of video gaming or the importance of St. Mike’s first-year check-in program to ensure students are feeling comfortable.

In other words, the St. Mike’s that you and I knew is still all that – and more. Great students, fabulous professors and a lively vibe.

I won’t be able to attend reunion as I am off to attend my daughter’s convocation but I’ll be thinking of my former classmates, wondering, for example, whether the guy who used to look just like Sting still does. I’d love to know whether the person so offended by the song Jet Boy, Jet Girl that he used a nail file to scratch the copy played at pub nights will attend – or whether the person savvy enough to replace the record with the French version will show up either.

Like my mother, I loved my St. Mike’s days. These days, each time I set foot on campus I feel re-energized. Here’s hoping my classmates have a great time and that the years fade away. Miss you, Class of 8T2.  Already wishing I were there.

Learn more about Alumni Reunion 2022 and register for events online.