Marlene Donaldson (BPHE 2001) is one of the most successful student-athletes to ever come through the Varsity Blues women's rugby program. Her passion for the sport has taken her all over the map, while also driving her achievements both on and off the pitch.

A member of the Varsity Blues from 1996 to 2000, Donaldson became the first University of Toronto student-athlete to earn CIAU all-Canadian honours in rugby in 1998. A four-year captain with the Blues, she was also a two-time OUA all-star.

"I loved my time at U of T and it holds such a special place in my mind," Donaldson said. "It was great to accomplish those things and no matter how humble you are, it feels great anytime you're acknowledged and recognized amongst your peers."

I loved my time at U of T. No matter how humble you are, it feels great anytime you're acknowledged and recognized amongst your peers

Despite all of the athletic accolades generated during her time at the University, the sport wasn't necessarily on her radar when she first got to the school.

"Out of high school, I didn't really know where I was going to fit or what I was wanting to do," she said. "Originally I was interested in playing basketball and I tried out for the team [but that] didn't work out."

"It was actually one of my classmates, Stacie Dalrymple (BPHE 1999), sitting on the bus to outdoor [education class], who suggested I come out to rugby. It wasn't until my second year though when I decided to see what it was all about. Then as soon as I got out there, I knew this is what I should be doing. [Rugby] fit me like a glove." 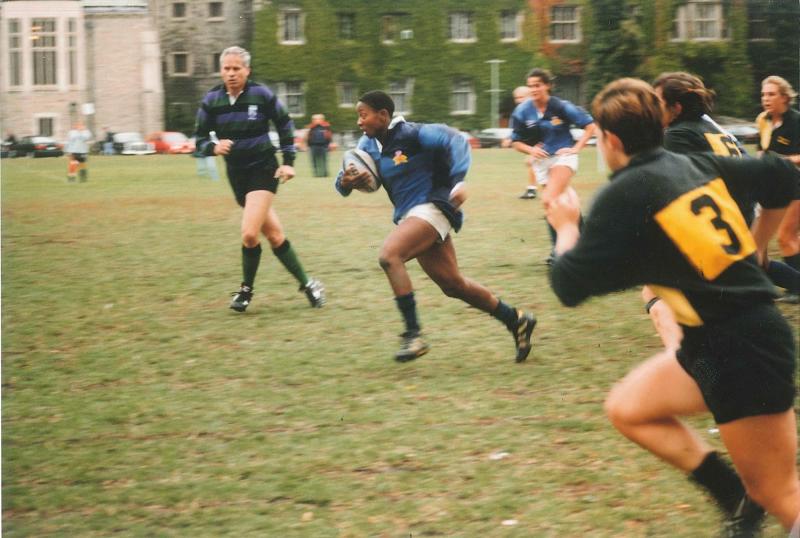 Born in Toronto, the daughter of Jamaican immigrants, Donaldson says she and her two older sisters grew up in a home that emphasized the importance of a university education. Although unsure at the time of what her future path may look like, she used her love of sport to help guide her post-secondary years.

"I came from a family where everyone went to university," she said. "My mom was a nurse, my dad was a teacher, my sister [studied] industrial engineering at U of T and my oldest sister was a nurse at Ryerson."

"At the time, when I chose U of T, I was thinking that I need to get an education because that is what is expected of me. All that I knew was my passion of sport though, so I chose to go into physical and health education hoping that it would help guide me to a fulfilling career."

Donaldson went on to graduate from the University of Toronto in 2001 with her bachelor's degree in physical and health education.

From there, she moved over 5,000 kilometers from home, following her love of rugby all the way across the Atlantic Ocean.

That was one of the pinnacles for me. 15's rugby was not in the Olympics so the goal was always to try and make the World Cup

Spending two years across the pond, Donaldson played with the London Wasps from 2001-2003.

"[Playing with the Wasps] was one of the best decisions I could have made," she said. "Next to U of T, those two years in England stick very strongly in my head, in terms of building my confidence and confirming that I was good at what I did."

Although Donaldson returned to Canada after two years in England, she would again relocate away from her Toronto roots. The former Varsity Blue wound up going from England to Victoria, British Columbia, where she would be able to play rugby year-round.

That decision ultimately helped Donaldson achieve one of her greatest athletic accomplishments as she was named to Team Canada for the 2010 Women's Rugby World Cup, oddly enough, back in England.

"That was one of the pinnacles for me because that was the ultimate goal at the time," she said. "15's rugby was not in the Olympics so the goal was always to try and make the World Cup every four years."

The Canadians would go on to finish second in their pool in 2010, ultimately finishing the tournament in sixth place. 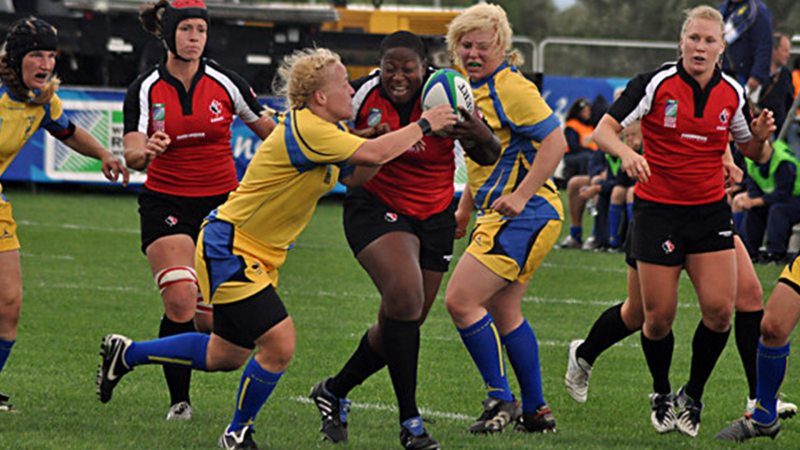 Fast forward to present day and Donaldson is not as focused on her own competitive playing days. However, she has made sure to stay very much involved in the sport in ways that allow her to truly impact and give back to the sport that has brought her so much joy.

She currently teaches at Queen Margaret's School in Duncan, B.C., as the senior school athletic director, as well as a full-time physical education teacher. Donaldson has also spent time on the board of directors for BC Rugby. She worked as the director of junior rugby for Westshore Rugby and later, their director of women's rugby. Prior to joining Queen Margaret's School, she worked as the girl's rugby development officer for BC Rugby.

If I can instill any of the positive things that have happened to me over my career, then I want to make sure I give that to other people

On top of her administrative commitments, Donaldson has coached with U12 teams, provincial U15 and U16 teams, U17, and is currently coaching with the senior women's team in Cowichan, B.C.

"I want to help provide teams with the infrastructure required for success: having fun, effective practice plans and an action plan for achieving our goals," Donaldson said. "I don't even think I'm the best at it but I know I am better than them not having anybody at all."

"If I can instill any of the positive things that have happened to me over my career, then I want to make sure I give that to other people."

Having had the opportunity to experience so many different things because of her dedication to the sport, Donaldson says, without a doubt, rugby has ultimately guided her to where she is today.