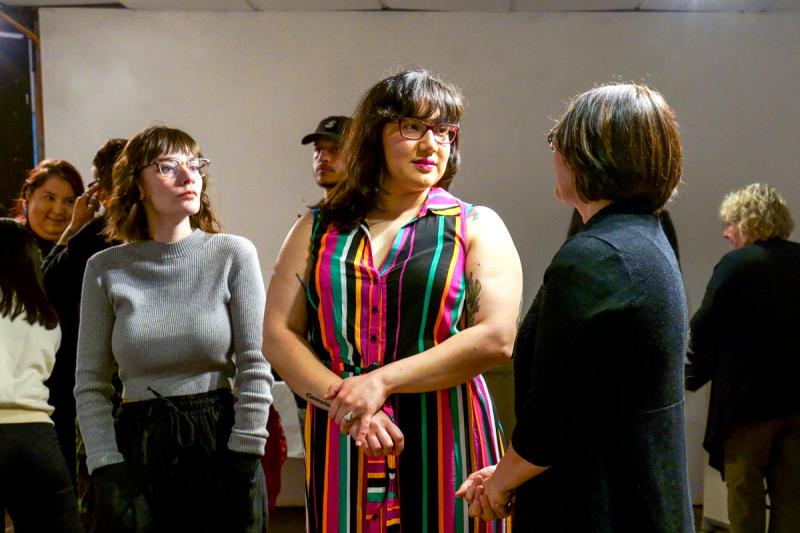 To experience the exhibit by the University of Toronto Scarborough’s first Indigenous artist-in-residence, participants had to both look and listen.

“It adds another layer of expression,” says Animikiik’otcii Maakaai (Indigenous Artist-in-Residence 2019), who debuted her first solo exhibit, Tako-Pinehsiiwan, at U of T Scarborough’s Gallery 1265.

“Oral tradition is so important in Anishinaabe culture, it’s how we learn, it’s how we pass down knowledge. It’s really vital to the storytelling that I’m trying to do through my drawings.”

The exhibit includes five drawings – four oil pastel and one chalk – suspended by ribbons hung from the ceiling, a trail of cedarwood branches carefully placed below them. Playing throughout the exhibit is a recording of Maakaai narrating a story about the impact of ceremony, a crucial part of Indigenous tradition and culture.

She says she was inspired to write the story after attending a women’s healing ceremony in Toronto a few years ago, calling it a “very pivotal time” in her life.

“Even though it was a very quick moment in time, it was very important and held a lot of meaning for me and I’ve held onto it for years now,” she says.

“Holding on to that story I can see how it has helped me through life and those changes I was trying to make at the time.”

Maakaai is the first to finish U of T Scarborough’s Indigenous Artist-in-Residence Program, a collaboration between the Doris McCarthy Gallery, the department of arts, culture and media and 7th Generation Image Makers (7th Gen), an art and mural program run by Native Child and Family Services of Toronto.

The program gives young Indigenous artists studio space, a stipend and access to campus resources to support them as they create an exhibit between September and June. It also includes the opportunity to audit courses (taking a course without getting a grade) once per semester.

Maakaai was born and raised in Toronto. On her father’s side, she has family ties to Kitchenuhmaykoosib Inninuwug First Nation, also known as Big Trout Lake First Nation, while her mother’s family is from Wales. Her dialect is Oji-Cree.

She says she has always been creative, but only started seriously creating artwork in 2016.

“It’s just something I’ve always been passionate about. I love creating, sharing my inner world and way of communicating and meeting people,” she says. “It’s about honouring those things that feel true and real to me that make up my reality, and in that way, I stay connected to my culture.” 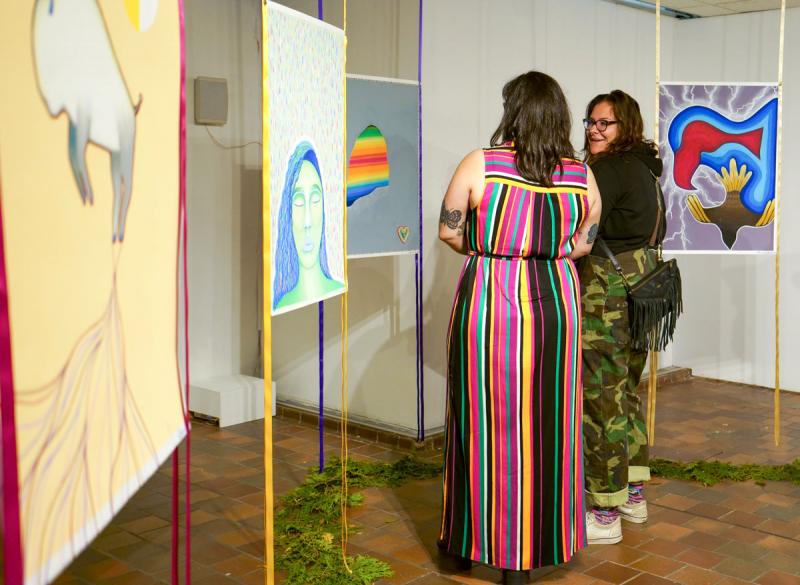 This was Maakaai’s first experience with post-secondary education.

“I’m glad I got to get a taste of post-secondary without the pressures of performing, getting grades and that kind of stress,” she says. “I was really able to sit and enjoy my classes and have my work come from a more personal point of view.”

The first class she took, a studio foundations course, got her thinking about using different materials to construct her exhibit. She tried several different mediums, including digital and paint, and even considered sculpture. Eventually, Maakaai went with a medium she had never used before – most of the drawings were made with oil pastels.

“It’s very colourful,” she says. “The textures are very nice and although it was a totally new medium for me, I was really excited to use it.”

The idea for the residency came after Reagan Kennedy, the arts program co-ordinator at 7th Generation Image Makers, began looking for a place to display the final pieces from another art program. She connected with the Doris McCarthy Gallery’s director and curator, Ann MacDonald, and Erin Peck, the exhibitions and outreach co-ordinator.

MacDonald and Peck offered to exhibit the works in the Doris McCarthy Gallery vitrines. When the exhibit ended, they began thinking about other ways the gallery and campus could support 7th Gen and young Indigenous artists.

“Being in these big institutions, which are colonial spaces, can provide a lot of challenges for a number of people, including Indigenous people,” Kennedy says.

“We wanted to provide a way where this residency could support someone in attending post-secondary, having access to an art studio and really have the time to develop a body of work to exhibit.”