When a newspaper headline asks whether your company can “save reading”, you know you’ve got it made. Allen Lau’s Wattpad has set the tech and publishing worlds on fire.

Lau co-founded Wattpad with Ivan Yuen in 2006, and some have said it promises to do for online publishing what Facebook did for social networking. Wattpad is a mobile-first reading experience where authors from around the globe can share their work and reach a massive audience of people reading on their phones and tablets.

Margaret Atwood, one of Canada’s most famous writers, is so impressed that she not only endorsed it but has posted an original poetry collection and a serialized zombie story.

Not just authors have been impressed. In 2012, the company secured $17.3 million in growth funding from Silicon Valley venture firms. Lau said then “I also want to change the world in a positive way and Wattpad has given me the opportunity to do that because I’m providing this creative outlet for a lot of people who otherwise wouldn’t be able to achieve their dream.”

Lau is on the Globe and Mail’s list of people behind the most promising start-up companies. Wattpad has been described as the YouTube of books but Lau says it is more interactive. Readers can comment on stories as they’re being written. Over 1,000,000 new stories are posted each month.

Lau told U of T Magazine that, “In the next 10 years, the whole notion of the book is going to change. We’re moving towards a world without gatekeepers, where there are hundreds of millions of readers and writers. And the line between them is blurring.” 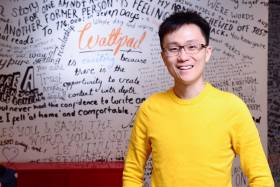