‘Stick to it and work hard’: A single mom, Thereasa Gordon set her sights on a degree – and never looked back 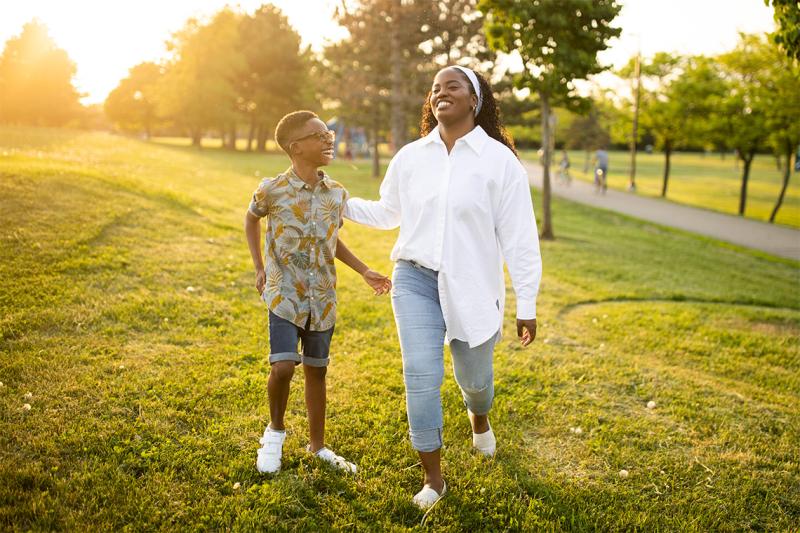 Thereasa Gordon, right, who graduates from U of T Mississauga this week, juggled the responsibility of raising her son, Romeo, left, while becoming the first in her family to earn a university degree (photo by Nick Iwanyshyn)

Before her son Romeo entered the world, weighing eight pounds and just under 15 ounces, Thereasa Gordon (BA 2022 UTM) made a plan: become the first in her family to attend and graduate from university – all while raising her child as a single parent.

She says she wanted to set an example for her son by demonstrating that it’s possible to attain goals that are seemingly beyond reach. And when people doubted her plan to one day don a black gown – and many did – she looked within herself for strength.

“I just have my baby and my dreams,” she would say.

Now, Gordon is set to graduate with distinction from the University of Toronto Mississauga on June 7 with an honours bachelor of arts in criminology and sociology. Her son and mother will be there to cheer her on.

“To be honest, where I am right now, I’m not surprised because I made a plan and I really said: I’m going to stick to it and work hard,” Gordon says.

“I could see it before anyone else saw it.”

I made a plan and I really said: I’m going to stick to it and work hard. I could see it before anyone else saw it.

Gordon was a business administration student at Humber College when she first learned she was pregnant. In order to get a job earlier and support her family, she transferred to the college’s personal support worker certificate program. After graduating six months into her pregnancy, she took care of elderly clients and later worked in retail.

In the fall of 2012, Romeo arrived and Gordon’s priorities suddenly changed. She wanted to be a strong role model for her son. While she wasn’t necessarily the best student in her youth, she vowed to go to every class, submit all her assignments on time, pursue top marks and improve her resume with extracurriculars. As well, she planned to keep working to pay the bills.

She says it’s as though a switch went off in her head.

Gordon created a long-term plan. The first step was enrolling in a college diploma program by the time Romeo reached kindergarten. The first day he was at school after Christmas break, she began general arts courses at Sheridan College while relying on the support of her family. Her older brothers, Michael and Nicholas, built Romeo’s bassinet, changed his diapers, taught him to ride a bike, customized his car-shaped bed with LED lights and took him to movies.

Gordon’s mom Genevieve, meanwhile, babysat to give her daughter a few more hours of study time and encouraged her pursuit of a post-secondary education. “I know you can do it – and you will do it,” Genevieve recalls telling her daughter.

Gordon applied to five universities and was accepted to all of them. She chose U of T Mississauga and pursued a double major in criminology, law and society and sociology. Her educational goal was no longer limited to landing a good job – she wanted to be an advocate for people who have been denied opportunities in life.

“I know what it’s like to be a marginalized person in society and to be in a vulnerable state,” Gordon says. “I want to encourage and inspire people, so that when they think about their dreams, they go for them – even if only they can see them.”

Arriving at the U of T Mississauga campus, Gordon says she sometimes felt out-of-place among students who often didn’t look like her, came from different socio-economic backgrounds or were much younger. But she was right at home in class, where she drew on her experience to contribute to discussions on critical race theory, gender equality and food insecurity, among other issues.

“I felt like, in the lectures, the topics that we discussed and the level of detail, and how open we were … I really for the first time felt like I was in a room where I could learn a lot from others, and my thoughts were valued,” she says.

I started and I’m going to finish it because he’s watching me.

She also made friends who were drawn to her maturity and sense of purpose.

Neena Hayer, an art and art history major at U of T Mississauga, recalls meeting Gordon in a first-year political science course at a time when Hayer was having trouble adjusting to the pace and competing responsibilities of university life. “She made university much easier for me because our paths crossed when I was kind of struggling with balancing everything,” Hayer says.

Gordon, not surprisingly, had become an expert in managing multiple priorities.

Her days typically started around 6:30 a.m. She dropped Romeo off at school in her car and then hopped on a bus to campus in order to save money on gas and parking. At the end of the day, she left class 10 minutes early to catch the bus home and pick up her son. After Romeo went to bed, Gordon stayed up into the wee hours writing essays and poring over textbooks.

She took advantage of student loans, worked in the summers and landed a work-study position at U of T Mississauga’s Career Centre, a job that helped her build confidence and grow a professional network.

“This role allowed me to share my story and shed that imposter syndrome I had when I first entered U of T Mississauga,” she says.

Then COVID-19 hit. As the first wave of the pandemic swept across Canada, Gordon found herself grappling with a new set of challenges. Romeo, who has asthma and had been hospitalized in the past with milder respiratory viruses, was kept home from school and could no longer play sports.

Suddenly, Gordon was no longer just a student and mother. She was a teacher, too. The two sat at adjacent desks so Gordon could help Romeo stay on top of his online classes while she attended her own.

To keep Romeo company, Gordon got him a shih-poo puppy they named “Rocco.” And whenever the going got tough, Gordon thought back to the reason she enrolled in university in the first place: her son and his future.

“I started and I’m going to finish it because he’s watching me,” she recalls saying to herself.

He doesn’t talk about his future without saying ‘university.’ That, to me, is my biggest reward.

Gordon also managed to find time to volunteer for organizations whose missions and values coincided with her own goals. She was a co-facilitator of youth justice circles at Associated Youth Services of Peel, an alternative to the criminal justice system that helps youth accused of criminal offences make amends for alleged harm to the community and avoid a criminal record. She was also part of a team at the social innovation project, Let’s Get Together! that created a mentorship program and curriculum for BIPOC youth, successfully advocating for a module about Black biochemist, Emmett Chappelle, who discovered the specific combination of chemicals behind bioluminescence.

Through an upper-year, hands-on university course that began last year, Gordon interned with the anti-Black racism unit in the City of Brampton’s equity office and helped put on its first-ever Black Mental Health Week last spring.

“As a Black person, I feel like I have a duty to advocate for other Black people as well – advocate for, represent and share our voices and stories,” she says, adding that she especially wants to empower Black youth.

“In the media, the school system, sometimes even in their households – everywhere – they have people who want to criminalize them or deny them opportunities, put negative labels on them, box them in.”

That’s why Gordon hopes to pursue a master’s degree in education so she can help members of underprivileged and vulnerable communities.

When she receives her U of T degree this week, Gordon will have finally fulfilled the promise she made to herself and her son many years ago. And to her delight, Romeo appears to already be planning to follow in her footsteps.

“He’s always talking about when he goes to university,” she says. “He doesn’t talk about his future without saying ‘university.’