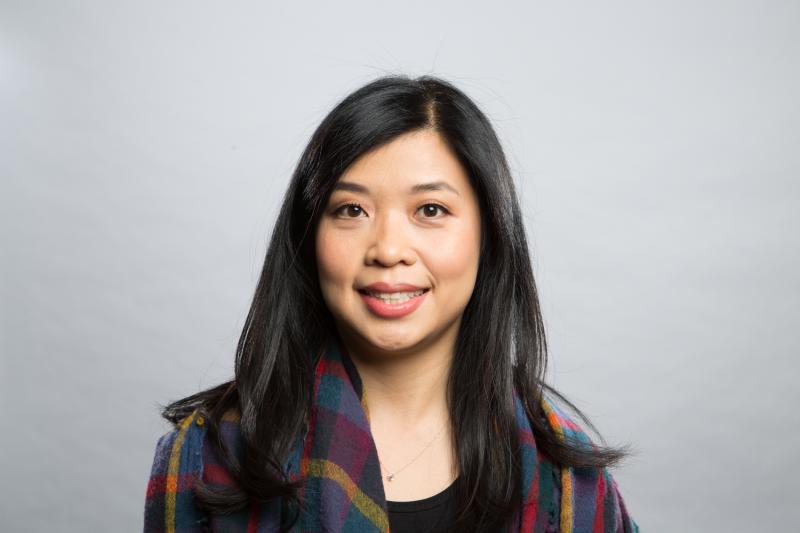 Tech entrepreneur Lily Tse is the founder and CEO of Think Dirty, a mobile beauty app that helps consumers understand what is in their personal care products (Photo: Lily Tse, by Paul Stewart)

“The most beautiful makeup for a woman is passion. But cosmetics are easier to buy,” says Lily Tse (BA 2001 UTSC), quoting fashion designer Yves St. Laurent. Tse is an entrepreneur and the CEO of Think Dirty, a mobile app that helps consumers understand the ingredients in their personal care products.

She may not be as big as St. Laurent yet, but for the past ten years, Tse has grown her environmental beauty and technology business exponentially. She’s done so by sticking to a fundamental personal philosophy on the intersection of beauty and health.

“I want women to reevaluate our relationship with beauty. I want to encourage responsible consumers who create more mindful relationships with their consumption choices.”

That responsible consumption model launched Tse’s Think Dirty app into the right market at the right time. With its unusual slogan, Think Dirty, Shop Clean, the mobile app stands out as unique in the crowded “clean beauty” market. Tse’s business model is savvy, having grown to include four revenue streams. Her target audience is not the already-environmentally conscious consumer, but those Average Janes and Joes who might shop differently if they could just figure out what was in their shampoo and lip gloss… and how toxic some of those products really are.

I want women to reevaluate our relationship with beauty. I want to encourage responsible consumers who create more mindful relationships with their consumption choices.

It’s a winning formula. Still, Tse didn’t start out thinking of herself as an entrepreneur. A 2001 graduate from the Arts Management program at UTSC, post-graduation, Tse spent ten years working full-time in the advertising industry.

“I came from a generation where entrepreneurship was not a mainstream thing. Nobody said, ‘I want to work at a startup.’ The narrative at that time was, if you are not working as a full-time employee, you are not serious about your career.”

Instead, Tse credits the birth of the Think Dirty app to a series of coincidental events. When her mother had breast cancer, Tse became conscious of the often-hidden connections between environmental toxins and the alarming rise in hormone-based cancers that especially afflict women, and how difficult it was to find out what chemicals were in products.

“The Pink Ribbon campaign, for instance – and cancer research generally – is really focused on the cure. No one really talks about the prevention of the disease. The cosmetics industry [in North America] has not been regulated that much. The laws regarding personal care ingredients have not been updated since the 1930s in the US.”

Then, Tse was unexpectedly laid off from her job at an ad agency. She suddenly had space to think and dream. It was a setback from which she was able to develop a strong company platform.

Think Dirty, Shop Clean got started at a pitch competition

In 2012, Tse entered a startup pitch competition at George Brown College, where she and nine others – all men – pitched their business ideas to a room of approximately 30 people.

“It was the very first time I’d pitched,” recalls Tse. “I was so nervous.” Nevertheless, it was Tse who walked out with the $5,000 grand prize, along with a bucketful of newfound confidence.

Fresh off her win, Tse officially launched Think Dirty, and the budding company began to grow. By 2017, Think Dirty had grown to a team of five. Over two million people were using the app.

While in the end the Dragons’ enthusiasm didn’t translate to real-world support, Think Dirty continued to enjoy success. Since the 2017 pitch, Tse’s team has doubled, while her subscriber base has grown to over five million.

And while Tse’s Think Dirty has been an unqualified success, the entrepreneur has been surprised by some of the unspoken barriers experienced by women in leadership.

“When I was an employee, I was aware of unconscious bias. But I assumed that the day that I became the boss it would go away. What surprised me is that it doesn’t. As a female leader, a business owner, you still constantly need to fight to get your voice heard.”

Women leaders are so tired from fighting through the glass ceiling. Once you get there you still have to fight with people you manage.

“I understand how women [in tech] need to break the glass ceiling. But no one talks about when you’re the woman manager, or even a business owner of your own company managing technical developers who are men. It’s just a battle that you have to fight every day.”

Tse says it took a lot of internal work to overcome these battles. A natural introvert, Tse says she has to “show them who is alpha,” noting that the more masculine leadership style she feels she sometimes needs to adopt is neither natural or comfortable for her.

“Women leaders are so tired from fighting through the glass ceiling. Once you get there you still have to fight with people you manage. That’s the craziest thing.”

And, while she would like to engage women developers, the pipeline for female talent is abysmally thin, says Tse. In fact, over the past ten years, she has had the opportunity to interview exactly two female mobile app developers.

Beauty, but not at the cost of health

Battles with glass ceilings aside, Tse is heavily invested in deconstructing society’s overall approach to beauty. As she was getting ready for her first pitch competition, for instance, Tse recognized she was concentrating on her appearance. Her male counterparts, on the other hand, were not.

In some ways, the Think Dirty helps Tse do her part to a level that playing field – or at least make it less  hostile for women.

I want us to be the ‘Internet Movie Data Base’ for beauty.

“My hope is that Think Dirty is in every woman (and man) ’s smart phone, that it becomes a global phenomenon. I want us to be the ‘Internet Movie Data Base’ for beauty,” with consumers pulling it up before making every purchase.

More than that, Tse hopes that, as a society, we come to a place where we rethink our relationship with beauty, and become more concerned about our personal health and safety – our intrinsic value – rather than the driving need to look a certain way or the value others put on us.

“Once our relationship with beauty is no longer based on insecurity,” says Tse, “then I think our mission is achieved.”