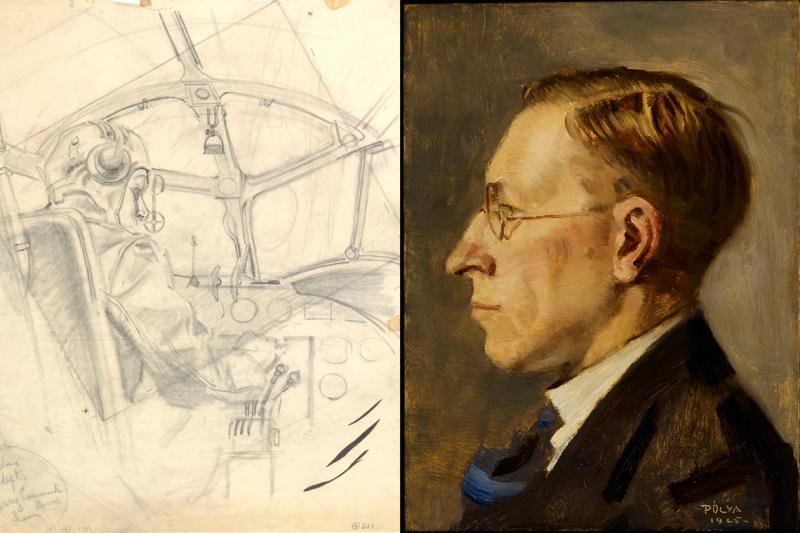 Frederick Banting (BMed 1916, MD 1922, Hon PhD 1923) is widely recognized for achievements in many fields – including, famously, the discovery of insulin with colleagues at the University of Toronto and partner hospitals a century ago.

His contributions in the First World War are also well-known – as a physician on the front lines and at the Battle of Canal du Nord, where he was injured by shrapnel yet kept working and ultimately received the Military Cross.

But often overlooked are Banting’s efforts before and during the Second World War on medical aspects of aviation. Planes had reached new levels of altitude and speed, creating harsh conditions for aircrews and health problems such as low oxygen and G-force induced blackout.

Banting used his national influence to restart and grow research on this vital aspect of the war. His efforts helped establish the field of aviation medicine in Canada and built the foundation for advances in Canadian aerospace medicine that continue today.

“Banting was absolutely instrumental to aviation medicine in Canada,” says Jordan Bimm, a post-doctoral researcher and instructor at the University of Chicago who studies the history of science, technology and medicine with a focus on human aspects of space exploration.

“The field would not have developed without him – at least not in the same way, largely because he was such a powerful medical celebrity. He got things done that others could not.”

In 1938, Banting, as a veteran, saw the threat of war was again real, says Bimm, who completed his undergraduate degree in history at U of T. He was persuaded to focus on aviation research by Maj. A.A. James of the Royal Canadian Army Medical Corps, who had been arguing for Canada to urgently invest in this field – as Germany had done for years.

Banting in turn lobbied for federal support and his efforts led to creation of the Associate Committee on Aviation Medical Research of the National Research Council in 1939. Banting chaired the committee, which funded aviation research and equipment across the country in universities and military units.

When war came in fall 1939, Canada already had the nucleus of a multi-disciplinary aviation medical research team with equipment available or in construction, according to Chester Stewart, a professor and later dean of medicine at Dalhousie University who had worked with Banting to document the state of medical research and training in Canada.

“Some of this equipment was of totally new design and permitted investigation of problems hitherto almost untouched,” Stewart later wrote for the journal Public Affairs in a seminal article that details the committee’s impact on Canadian aviation research during the war.

A combined cold room and low-pressure chamber at the Canadian military’s No. 1 clinical investigation unit, on the grounds of the former Eglinton Hunt Club on Avenue Road in Toronto, became the first on the continent to replicate conditions for the study of high-altitude illnesses.

Researchers from U of T used the unit to design the first oxygen mask that did not freeze at low temperatures. Additional work by U of T physicists led to the discovery of dry oxygen that further improved mask design, and an oxygen demand valve that automated oxygen intake based on the individual needs of aircrew.

British and U.S. researchers also used the unit and other Canadian facilities, according to Stewart, who wrote that medical aviation scientists in this country were ahead of their American counterparts in some areas even before the war began, and published prolifically throughout the conflict.

Toronto’s No. 1 unit also became home to the first human centrifuge in any country outside Germany. This large and expensive machine replicated the human effects of gravitational force at high speeds, which included blurred vision and blackouts.

Wilbur Franks (BA 1924 VIC, BMed 1928), a U of T alumnus and cancer researcher working under Banting, used the centrifuge to develop one of the world’s first anti-gravity suits. The Franks Flying Suit, made of fluid-filled rubber, saw combat action over North Africa as early as 1942 and informed later designs of U.S. aviation and aerospace suits.

More advances came from the work in Toronto and by other Canadian teams, including non-fogging, wide-vision goggles, methods to detect carbon monoxide, better communications equipment and noise-reduction helmets.

Some historians have questioned the value of this output and wondered if Banting’s unparalleled power to direct research funding was always in the best interest of science. But most agree the work was significant, and that it created a lasting interest in aviation medicine in Canada.

“Unlike insulin, the individual discoveries matter less than the slow, incremental story about an influx of attention and focus for a niche field, which has left a distinctly Canadian legacy in aviation and aerospace medicine,” says Bimm. “That’s Banting’s real contribution here.”

The equipment and research teams that Banting helped set up produced advances after the war, though at reduced speed. Canada became the third nation in space in 1962 with the launch of the Alouette-1 satellite, and later made advances on the vestibular system and balance during space flight, and a type of motion sickness called space adaptation syndrome.

The military No. 1 unit on Avenue Road evolved and in 1994 moved to Downsview, which remains an important centre for research on technology and human performance through Defence Research and Development Canada.

Joan Saary is an occupational medicine specialist and associate professor in U of T’s department of medicine, who is also a consultant physician and flight surgeon working with the Canadian Forces Environmental Medicine Establishment and the Canadian Space Agency.

She says Canada is uniquely positioned to play a role in aerospace medicine through medical and other technological expertise. She plans to help build that potential with a new fellowship program at U of T, which will offer interdisciplinary and experiential training in aerospace medicine.

“Unlike traditional medical training programs, fellows will participate in unique experiences such as flight school to understand the aviation environment,” says Saary. “We have a cadre of experts in this country who can teach and mentor another generation to solve the health challenges of space travel, which is increasingly a civilian activity.”

Training and research in aerospace medicine often centres on enabling health and safety in extreme environments, and here Canada has an edge due to geography. “Canada is an interesting analogue for space,” says Saary. “In space environments there are issues of distance, delayed communications and an inability to evacuate in harsh, remote conditions, which are similar concerns in the Canadian North.”

Technologies developed to mitigate risk in aerospace environments can also be applied to terrestrial medicine, says Saary, who began her Canadian Forces work with divers. Recent examples include satellite tracking of COVID-19 and other pandemics, clinical use of miniature cameras initially designed for space and cardiac monitors now used in intensive care.

A key goal of the fellowship program is to prepare graduates who can foster knowledge exchange and contribute in academic, military and civilian organizations.

“Canada has quietly changed the world through aviation and aerospace medicine innovations for decades,” Saary says. “I think we can do a lot more of that.”