'Not content with the world': U of T grad Marquela Nunes writes fantasy to pursue real-life change 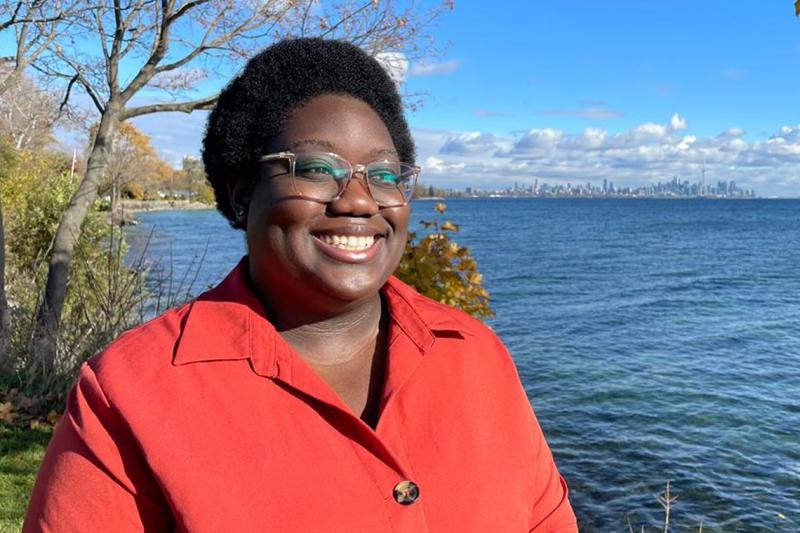 Marquela Nunes (BA 2021 UTSC), who graduates on Nov. 18, is using the fantasy book genre to create a safe space to unpack and rewrite history so that LGBTQ rights and racial equality have always existed (photo courtesy of Marquela Nunes)

It was through fantasy that Marquela Nunes (BA 2021 UTSC) found an outlet for real-world activism.

The soon-to-be graduate of the University of Toronto Scarborough used the book genre – characterized by elements such as magic and epic characters – to create a safe space to unpack and rewrite history so that LGBTQ rights and racial equality have always existed.

Her debut novel, the first draft of which has been completed, pulls from the mythologies and histories of West Africa and Central Asia in order to “re-imagine how wondrous our world could be.”

To re-imagine how wondrous our world could be

“It’s almost too raw to write non-fiction because I’m not content with the world we live in,” Nunes says. “Sometimes, I want to escape and writing fantasy is that escape for me.

“Ultimately, I like to write fantasy because it opens a world of possibilities.”

Nunes, who graduates this week from the specialist co-op program in English with a minor in creative writing, says two professors from U of T Scarborough’s department of English had a profound impact on her: Associate Professor Karina Vernon, who nurtured her interpretation of course material; and Assistant Professor SJ Sindu, who helped her gain confidence while working on the novel.

“Being able to bounce certain ideas off her and get in-depth feedback was very valuable to me,” Nunes says of Sindu. “She had a huge influence on me.”

Nunes’s efforts to initiate conversations about equity and inclusion are shaped by her many volunteer and communications roles on campus and in the community. In 2017, Nunes began volunteering with the Imani Academic Mentorship Program, an initiative that helps Black youth in Scarborough pursue post-secondary education.

“This helped me decide the type of activist I wanted to be. It was a stepping stone to what I’m doing right now with my writing.”

As a co-op student, Nunes worked as an online projects co-ordinator to support the development of unconscious bias training modules – an equity and diversity initiative led by Maydianne Andrade (MSc 1995), a professor in the department of biological sciences at U of T Scarborough. Nunes designed a series of web videos to provide a user-friendly experience for U of T staff and faculty to learn about how to spot unconscious bias in the workplace.

Grades are one part of your time at university. Prioritize learning about who you are as a person

Nunes currently works in finance and continues her equity work part-time at the Federation of Black Canadians, a non-profit organization that works with community partners to advance the interests of Black communities across the country.

After juggling work and school throughout the pandemic, Nunes’s advice to students is to not allow grades to define your worth – and don’t compare yourself to others.

“Grades are one part of your time at university,” Nunes says. “Do a lot of self-searching and prioritize learning about who you are as a person.”