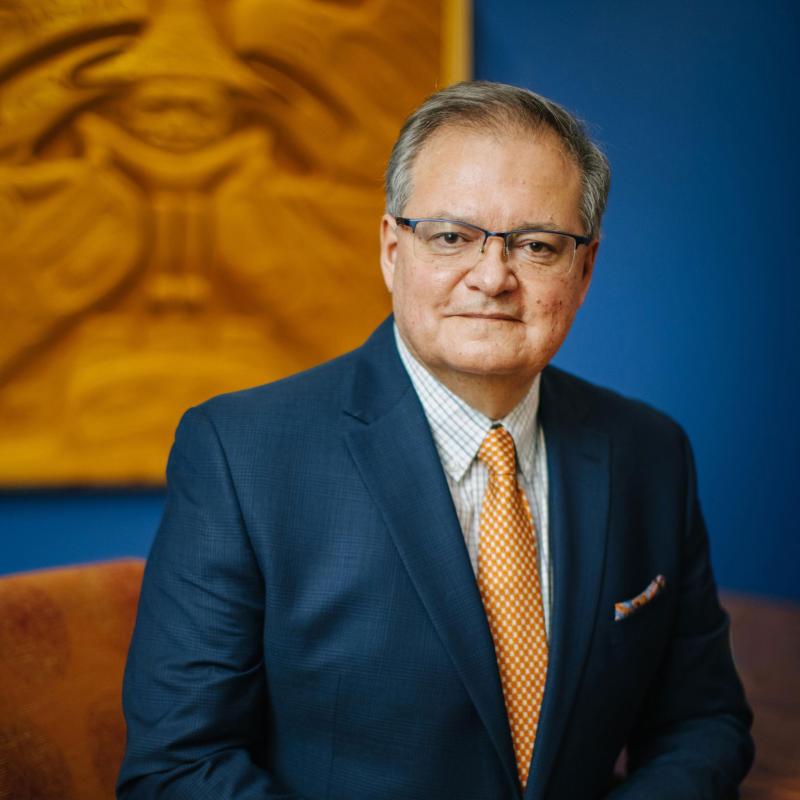 In his role as Special Advisor on Indigenous Initiatives, Professor Mike DeGagné will help guide curriculum, pedagogy, faculty development, student recruitment and support at U of T Scarborough (Photo by Elizabeth Beddall)

The spirit of reconciliation shapes the work of Mike DeGagné (BSc 1983 UTSC), the newly appointed Special Advisor on Indigenous Initiatives at U of T Scarborough.

For DeGagné, the appointment feels like coming home. When studying at UTSC in the late 1970s, he found the university had a “real sense of community,” and a “wonderful family feel.” He has already reached out to colleagues from forty years ago to reconnect.

DeGagné says universities have a special role in reconciliation because they create and disseminate curriculum that will educate non-Indigenous and Indigenous persons alike about the importance of Indigenous history, culture, methodologies, and possibilities. It is this spirit that has defined his own life, as he spent decades working in and with the Indigenous community and experienced multi-layered, deep, rich engagement on their many issues and challenges.

"An entirely different way of experiencing the world"

DeGagné was born in northwestern Ontario and was raised in small towns throughout the region. He is a member of the Ojibwe community of Animakee Wa Zhing 37 First Nation (English name Northwest Angle).

His mother, a nurse, and his father, a teacher, looked for opportunities to provide unique experiences for his family. They moved to Nairobi, Kenya when DeGagne was a teen to establish a teachers college as part of Canada’s international development program. East Africa offered an entirely different way of experiencing the world, and allowed DeGagne to observe the difficult work of cultural reconciliation in a new way.

The 60’s and 70’s were a very different time for Indigenous people, he explains. During his childhood, Indigenous people faced much more overt political, cultural, and economic discrimination than they do today, and progress within Canadian society was hard to come by. Indigenous people didn’t receive the right to vote until 1960, the same year that DeGagné was born. That was the decade of the Sixties Scoop, when many Indigenous children were removed from their parents and given to white parents to adopt. Residential schools were also in full swing. It wasn’t until 1975 that barriers were lifted for Indigenous people to attend postsecondary education.

The discovery of what was necessary to tackle this legacy of oppression began while DeGagné was studying at U of T Scarborough for a BSc in biology. In his summers, he worked for a youth program in the Ojibway community of Whitefish Lake First Nation in northern Ontario. Those involved in that sort of work were starting to connect the historical oppressive treatment of indigenous people to mental health and addiction.

For the first time, DeGagné became connected to an involved, politically active Indigenous environment, one that saw health and healing as essential elements in progress for Indigenous people and communities. “A lot of the people who were working in addictions were advocating for Indigenous rights in a political way,” he says.

DeGagné stayed in the field of addiction, working first with an on-reserve prevention group, later as a community consultant for the Addiction Research Foundation of Ontario, then in a similar role with the Canadian Centre on Substance in Ottawa. This led to a decade in the federal government, ostensibly in Indigenous health and addiction, then later as the founding executive director of the Aboriginal Healing Foundation.

Universities have a unique role in guiding the rest of Canada towards a more equitable, engaged society

From the time he was young, DeGagné wanted to do meaningful work in the area of social justice. The richness of his experiences, both inside and outside the university, meant that his first university job wasn’t an entry-level position, but as President at Nipissing University in North Bay, Ontario.

Universities have a unique role in guiding the rest of Canada towards a more equitable, engaged society. The UTSC Special Advisor role will focus on curriculum, pedagogy, and faculty development; student recruitment and support; and research culture.

Other responsibilities include facilitating programming in Indigenous House, supporting engagement with Indigenous communities and mentoring Indigenous faculty, librarians, and staff. At the same time, DeGagné will continue his role as President and CEO of Indspire, a national Indigenous organization that supports Indigenous post-secondary students and recognizes Indigenous excellence through the annual INDSPIRE awards.