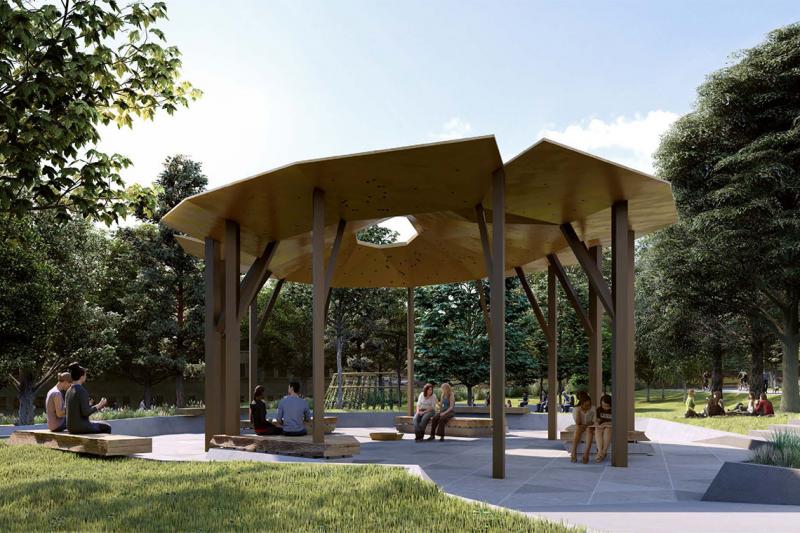 Knowledge House, a central feature of U of T's Indigenous Landscape project, is a gathering space supported by 13 columns that symbolize the 13 moons of the year (rendering by Brook McIlroy and Mat Winter)

The design proposal for a prominent Indigenous space at the heart of the University of Toronto’s St. George campus reveals a place that celebrates Indigenous culture, fosters community and educates visitors about the history of the land and the Indigenous nations who have lived and gathered there for millennia.

The Indigenous Landscape project at Taddle Creek uses design, storytelling and culture to create a highly visible Indigenous space on Hart House Green. Elements include teaching, gathering and event spaces, gardens for plant medicines and Indigenous trees and cultural markers offering information on residential schools, treaties and the burying of Taddle Creek, which once snaked through the area.

It’s all part of U of T’s Landmark Project – a broader revitalization of the historic core of the St George campus.

“We’ve received a lot of positive feedback and there’s a lot of excitement and anticipation at this project coming to fruition,” said Shannon Simpson, U of T’s director of Indigenous Initiatives and co-chair of the Indigenous Landscape project. “People feel like they’ve been listened to and heard, and the Indigenous community – students, faculty, staff and Elders – has been really excited and happy at what they’ve said are important design elements being incorporated into the project.”

The plans were developed following extensive consultations with Indigenous U of T community members, Elders and nations in accordance with “Answering the Call: Wecheehetowin,” U of T’s response to the Truth and Reconciliation Commission (TRC) of Canada’s Calls to Action. That includes the creation of an Indigenous Advisory Committee that comprises Indigenous students, faculty, staff and representatives of the Elders’ Circle. Representation on the committee was also offered to the Huron-Wendat, the Seneca and the Mississaugas of the Credit – the nation on whose traditional lands the University operates.

“The consultation process included Elders, students, faculty, staff and the nations on whose traditional lands the University operates”

“There has been a very robust consultation process that began early in the project with the advisory committee and stakeholders,” said Simpson, a member of Alderville First Nation. “We’ve also been able to engage with Indigenous students across campus through pop-ups; setting up displays at significant Indigenous events on campus; and consultations with pockets of Indigenous staff, like the First Nations House team for example.

“I think the project has done a really good job in trying to reach anyone and everyone at U of T that would engage with this space.”

The process of conceptualizing and designing the Indigenous Landscape began in the winter of 2018 when the advisory committee identified core goals for the project. The committee realized the project required a design team that had a strong track record of Indigenous place-making and a commitment to co-operating and consulting with the university’s Indigenous community.

“The goal of the landscape is to speak to all Indigenous students, faculty, staff and community members on campus, and those who may come from anywhere on Turtle Island or beyond,” said Professor Donald Ainslie, co-chair of the Landmark Project, and the only non-Indigenous member of the advisory committee. “But we feel a special responsibility to the nations on whose land the University operates.”

In August of last year, the project was awarded to the Indigenous Design Studio at Brook McIlroy, which  is partnering with the Indigenous plant specialist Joseph Pitawanakwat of Creators Garden.

Ryan Gorrie, an architect and senior associate at Brook McIlroy and member of Sand Point First Nation on Lake Nipigon, says a driving force of the project is being able to acknowledge Taddle Creek, long a gathering place for Indigenous groups until it was buried in the 19th century.

“The burying of the creek was synonymous with the burying of Indigenous knowledge, culture and ways. It is an important piece to reflect on”

“Thinking that the burying of the creek was synonymous with the burying of Indigenous knowledge, culture and ways is an important piece to reflect on – the way we treat the land and the way Indigenous people have been treated,” said Gorrie. “Acknowledging the creek in some form is an important part of the project, but also this sense of presence – how to create a permanent place where Indigenous culture can be shared, where people can gather and where active and passive knowledge can be part of the experience for Indigenous and non-Indigenous people.”

The main entrance to the estimated 4,500-square metre site is on the east side, a decision that Gorrie said reflects the importance of the easterly direction in many Indigenous cultures as marking the beginning of a new day. The entrance leads to a walkway lined by a creek bed which, during rainfalls, will direct water to medicinal plants in the low-elevation area of the site.

The pavement around the perimeter of the site features triangle-cut tiles with bronze inlays. “Bronze is an alloy of copper, which features prominently in ceremonial use in Indigenous nations as relates to water, so there’s that connection as well,” said Gorrie.

The central structure of the landscape is Knowledge House, a gathering space supported by 13 columns that symbolize the 13 moons of the year and encircle a central fire pit where a ceremonial fire can be lit. The underside of the structure’s roof features depictions of Indigenous star knowledge and constellations, while the centre of the roof has a hole through which smoke from the fire can rise.

“The gathering structure centres the idea of fire and creation in a sense, because there’s a hole where the fire escapes through the structure and there are stories about the hole in the sky, Sky Woman and the connection between sky and earth,” said Gorrie.

To the south of Knowledge House, there will be a clearing and amphitheatre space that Gorrie describes as a “less formal teaching and passive seating area” dotted with benchtops made using reclaimed timber sourced from around the site.

“Indigenous people bend saplings to talk about directions to pathways and water, so we’ll have a marker tree that will mark time as things go up”

While these two structures form a key part of the Indigenous Landscape, Gorrie says the trees and plants around the site are just as important.

“One of the threads that came up during consultations was, ‘How do we restore things like plant knowledge and bring that into the fold?’ said Gorrie. “Having a knowledge-holder like Joseph Pitawanakwat on our team who has that extensive plant knowledge could augment what was being shared with us by Elders and other stakeholders.”

Trees were selected carefully, reflecting the input of community members.

“Indigenous people utilize saplings and bend them to talk about directions to pathways and water, so we’ll have a marker tree that will mark time as things go up,” said Gorrie. “Important trees like maple were brought up, so we’ll have an extended maple grove and various other trees like spruce, tamarack, pine and Saskatoon – so quite a wide palate in the plantings.”

The site will also feature cultural markers that contain information and stories, and will be augmented with QR codes that direct visitors to online content with more details.

For Gorrie, the Indigenous Landscape project is poised to become a beautiful and meaningful place in which to learn, teach, gather and socialize, with the inputs of U of T’s Indigenous community crucial to the overall vision.

“I think it’s really exciting to have an Indigenous place that is highly visible, that is beautiful, and that reflects what we heard from community,” said Gorrie. “It pushes the University of Toronto in a really good direction relative to its goals of truth and reconciliation.”

The project is nearing the end of the design development phase. The next stage is where construction documents are prepared and blueprints are drawn.

“It’s really exciting to have an Indigenous place that is highly visible, beautiful, and reflects what we heard from community”

Simpson says the onset of the COVID-19 pandemic earlier this year did not significantly slow down the consultation process, as core elements and themes had already been identified and realized. Remote meetings have since been held with stakeholders – including some Elders who live and work in their respective nations – to keep them abreast of the project’s progress and get their feedback

“We didn’t really miss a beat with the Elders. They were able to navigate Zoom and Microsoft Teams quite quickly, and we were able to either deliver the plans to their homes or screen-share or e-mail presentations to them, so we really made it work with whatever medium worked for them,” she said. “They really missed engaging with each other and with U of T when COVID-19 hit, so it was important for us to continue the meetings.”

Simpson adds that she and Ainslie have also held one-on-one meetings with key stakeholders and group meetings with the advisory committee, First Nations House and Indigenous faculty and staff.

She says the feedback and reaction has been overwhelmingly positive.

“We’re all excited and ready for the ground to break and looking forward to the day when we can be together in this space.” 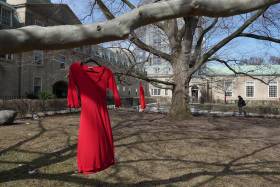