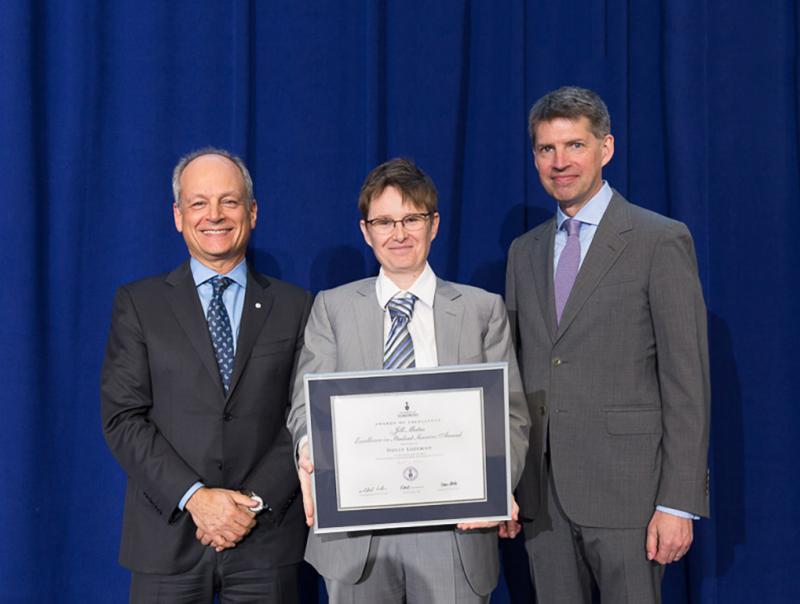 Holly Luffman (BA 1994 UC, MA 2008), interim director of Students at U of T’s Centre for International Experience, has been named one of this year’s two recipients of the Jill Matus Excellence in Student Services Award for her work in creating learning experiences that turn U of T students into true global citizens.

“I’m definitely converted to the importance of world travelling!” says Luffman. That’s an understatement: she has been globetrotting since graduating from U of T in 1994. In 2014, she even took a year to travel around the world visiting meditation communities.

“I feel travel has helped me expand my own world view,” she says. “I try my best to suspend my own position so that I can learn better from others, and I think having this intention helps me realize other people’s goals, rather than just uncritically impose my own expectations and values.”

Travellers also learn immensely from responding to the inevitable challenges that come their way, says Luffman, who has also led the Safety Abroad program at the Centre since 2002. “I survived a car accident in India; I found a scorpion in my bed – the thing that I recognize is that if you respond to a challenge that really is sometimes where the most important learning can occur. We try to teach students to think proactively and strategically about what their coping skills are.”

The University’s Centre for International Experience has three aspects to its mission: it helps Canadian students travel for work and study, it helps international students at U of T locate resources and community in Toronto, and it connects the two groups together to learn from each other.

Luffman’s work with Safety Abroad, for example, involves providing proactive education and resources about safe travel and the culture of the place the students will visit. Though the goal is to avoid risk and prevent trouble, U of T is also there when the unexpected occurs. When a 9.0 earthquake and tsunami hit Japan in 2011, Luffman located U of T students travelling in the country and helped them to safety. She also arranged for a memorial service to help students here in Toronto grieve the devastation and losses.

Luffman also founded the Centre’s Intercultural Learning Program. International students share with those from Canada in workshops that include intercultural theory sessions, experiential activities, reflection sessions and a meeting with a First Nations Elder.

“We help students think critically about their own culture,” she says, “which improves their ability to communicate across cross-cultural differences. When we see how our views are being shaped by culture, that helps us better understand persons from different locations.” The basic model of the program recognizes that each person in the room brings their own strengths and experiences: so it models global citizenship in action.

Luffman’s colleagues praise the innovative workshops along with her other achievements: her efforts have doubled enrolment in the Step Up Initiative, which generates opportunities for international students new to the University to make friends and become community involved. And the students she has helped speak movingly of her compassion, respect and understanding.

That comes, perhaps, from Luffman’s admiration for them: “I’m just constantly in awe of the fact that students make the decision to cross the world for a degree,” she says. “The courage that it takes! This, for me, is such a strong motivation that we do our absolute best as an institution to support them.”

“I love it,” she adds, “when I can just snatch a few minutes and sit in our hallway and talk to the international students. That’s pretty awesome. I’m constantly inspired by our students.”

The Jill Matus Excellence in Student Services Award was established in recognition of Professor Jill Matus’s exemplary service to the University of Toronto, spanning seven years as Vice-Provost, Students and Vice-Provost, Students and First-Entry Divisions. It is presented under the banner of the Awards of Excellence, a program recognizing the outstanding members of the University of Toronto community who have made rich and meaningful contributions to the University, their communities and to the world.

Holly Luffman and the other 2016 Awards of Excellence recipients will be honoured at a recognition event on May 4.