'A doctor in the palm of our hands': Brother-sister duo create app to make virtual eye care possible in Bangladesh 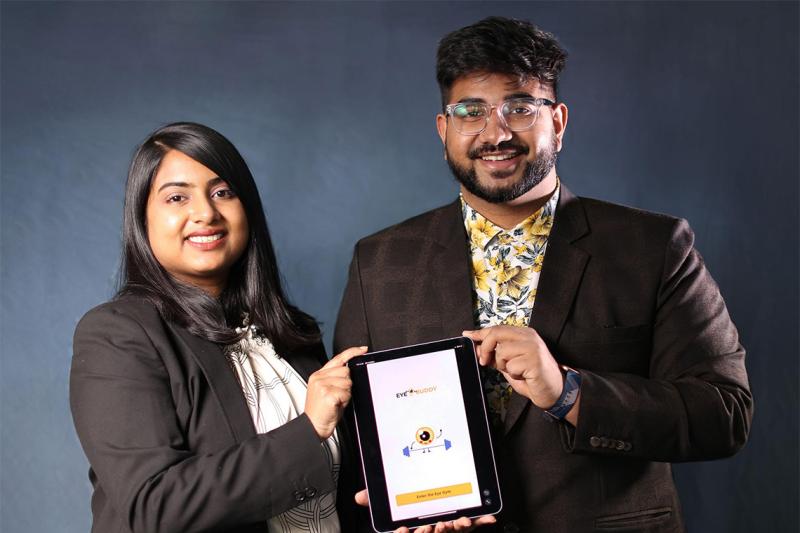 Purnashree (left) and Pradipta Chowdhury have created an app to bring telehealth to eye doctors, while offering training and tracking features for eye care (Submitted photo)

A brother-sister duo’s start-up has partnered with one of the largest eye hospitals in Bangladesh in an effort to make trips to the eye doctor completely virtual.

Purnashree Chowdhury, a doctor in Bangladesh, and her brother Pradipta Chowdhury (BSc 2022 UTSC), created the EyeBuddy app to deliver the vision screenings and eye tests used in most check-ups.

“We’re trying to make a whole ecosystem where a patient just sitting in their house can call up an ophthalmologist,” says Pradipta, who graduated from the University of Toronto Scarborough last year and was recently accepted into medical school. “Anyone can have a doctor 24-7 for immediate and certain eye issues.”

The app will also bring telehealth to eye doctors in the coming months, connecting patients across Bangladesh with ophthalmologists at a major eye-care hospital.

“In developing countries, transportation is a massive deal. The top hospitals cannot provide services to remote areas,” says Pradipta, who aspires to be an ophthalmologist like his father. “But we can have a doctor in the palm of our hands.”

The siblings are working to make sure Bangladesh is only the first of many partnerships with hospitals around the world as their start-up continues growing out of The Hub, U of T Scarborough’s entrepreneurial incubator.

“EyeBuddy is moving quite rapidly with the full support of the community, the government and several top doctors in Bangladesh,” says Gray Graffam, former director of The Hub. “They’re tied into something that can go beyond Bangladesh and their current connections.”

For now, the rest of the world can access EyeBuddy’s other features, which aim to make eye care fun. Daily eye tests notify users of potential early vision loss and eye conditions while tracking the progress of each eye. The app also has more than 50 exercises that train all 12 eye muscles, and users can customize their training around conditions such as dry eye, lazy eye and macular degeneration. They can also earn points, unlock milestones and connect with others on the platform.

“It can be a very depressing thing to know you’re dealing with an eye condition or vision loss,” Pradipta says. “We are trying to build a huge community around people with similar eye conditions that can support each other.”

That community is quickly growing. The app has more than 17,000 subscribers and nearly 2,000 daily visitors from almost every continent. Though they designed EyeBuddy to appeal to all ages, the siblings also created a custom version for kids with more colours and games and fewer medical terms. They hope to eventually roll it out to schools across Canada.

Purnashree says childhood is a crucial time for eye development; it’s also when children may begin adapting to eye conditions instead of seeking help.

“Early detection would relieve a lot of financial burden on families. If a condition is chronic, treatment is long-term,” says Purnashree, who is a doctor in Bangladesh and is pursuing her licence to practice in Canada. “With lots of conditions, we can be saved from spending unnecessarily – if we can just pick it up early.”

The Chowdhurys had heartening results after testing EyeBuddy in elementary schools. A teacher reported students were playing with the app, unprompted, in the middle of class. One student discovered he was colourblind through EyeBuddy and later followed the app’s recommendation of going to an eye doctor.

“Health care is complicated. We wanted to make a friendly but scientific app so people can be aware of their eye health and protect their eyes in a way that’s not boring,” says Pradipta,

Pradipta and Purnashree’s father is the director of a major eye hospital in Bangladesh. As Pradipta prepares to attend medical school in the U.K., he and his sister say they are glad the app will keep them connected with each other and their father, who has been at the back of the business in an advisory role.

“Through this app, we have a purpose tying us together,” Purnashree says.