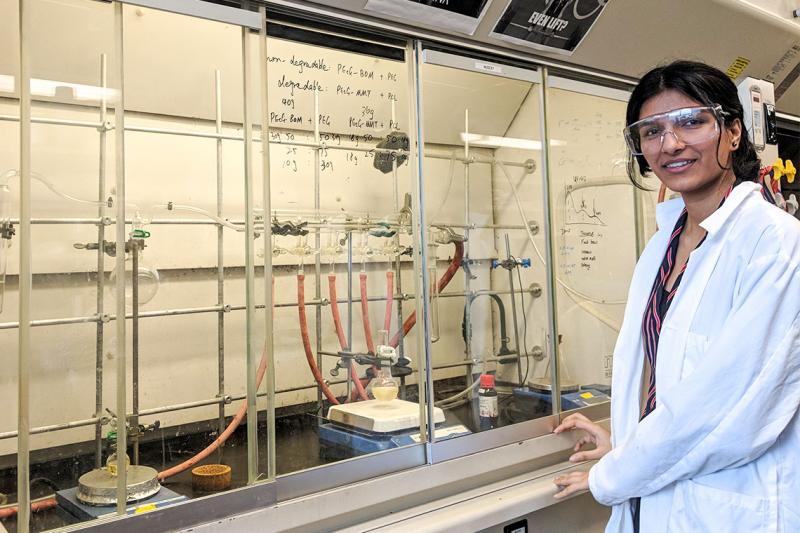 There may come a time when the next blouse or pair of gym shorts you buy is made of banana peels, rotten tomatoes, coffee grounds or mouldy bread.

It’s not as strange as it sounds. In fact, the future of fashion depends on the use of biodegradable and carbon-neutral materials, says Avneet Ghotra (BSc 2018 UTM), an alumna of the University of Toronto Mississauga who specialized in environmental science and biochemistry.

She is putting that notion to the test with ALT TEX, a startup she co-founded last fall with her best friend, Myra Arshad, who studied business at York University. Currently part of the Scale Up program at U of T Mississauga’s ICUBE business incubator, ALT TEX was recently awarded a grant of $30,000 from the Lo Family Social Venture Fund.

“We are in a space involving intensive research and development, and that requires a lot of investment, so we are really grateful for this support,” Ghotra says.

A chief problem in today’s fashion industry, she adds, is that most textiles are blended with synthetic and non-renewable fibre polyester, rendering them unrecyclable. An alternative that has emerged in recent years is polylactic acid (PLA), a decomposable bioplastic that is being used for food packaging, medical implants and 3D printing.

PLA is typically made from cornstock, but Ghotra doesn’t want to compete with a crop already used for feedstock, human consumption and alternative fuel. Plus, she notes, there’s no need to plant more corn when there is an existing supply of unused post-industrial food waste – from growers, producers and retailers – containing the same biological building blocks for producing PLA.

Ghotra and Arshad have been conducting lab experiments, starting with discarded apples, to create a PLA-based fabric that is strong, durable, decomposable and cost-effective. They are also working to build partnerships with farmers and juiceries to access their waste. Such efforts, if successful, promise to divert significant amounts of organic waste – which emits the greenhouse gas methane – from landfills, while enabling the fashion industry to be more sustainable.

ALT TEX is one of three ICUBE-affiliated companies that received grants from the Lo Family Social Venture Fund, which awarded funding to a total of 14 U of T startups. The fund champions U of T students or recent graduates with ideas for promising social enterprises that could have a global impact. Another winner is Yi Ru (BASc 2015), a graduate student in mechanical and industrial engineering whose YourTable app is trying to combat loneliness by helping people eat together. Billed as a LinkedIn for food, it allows solo diners to connect with each other to enjoy a meal at an eatery and take advantage of specials from its restaurant partners.

Recipients Jamie Lee (BCom 2020) and Judson Asiruwa (BCom 2020), U of T Rotman Commerce alumni, have also created a food-focused mobile app. Swate tracks the ingredients in your fridge and pantry to help you know what to cook and when to cook it. After you scan your grocery receipt, the app will notify you when your spinach or eggs are about to expire. Swate will also suggest healthful, delicious recipes in the order of your food’s best-before dates. The goal is to help people make smarter food choices and save money while reducing household food waste.

“ICUBE has been a huge catalyst. It’s pushing us forward and exposing us to more opportunities”

The three startups are among several that are nurtured each year by ICUBE, one of several entrepreneurship hubs at U of T and a centre for exploring new business ideas and supporting students and community members with early-stage enterprises. Workshops, mentorship, a co-working space, special events and connections to funding opportunities are among ICUBE’s core offerings. The recently introduced ICUBE Studio helps U of T-based startups in the University accelerator network access graphic design, marketing and software development help from talented U of T Mississauga students, who gain work-integrated learning experience.