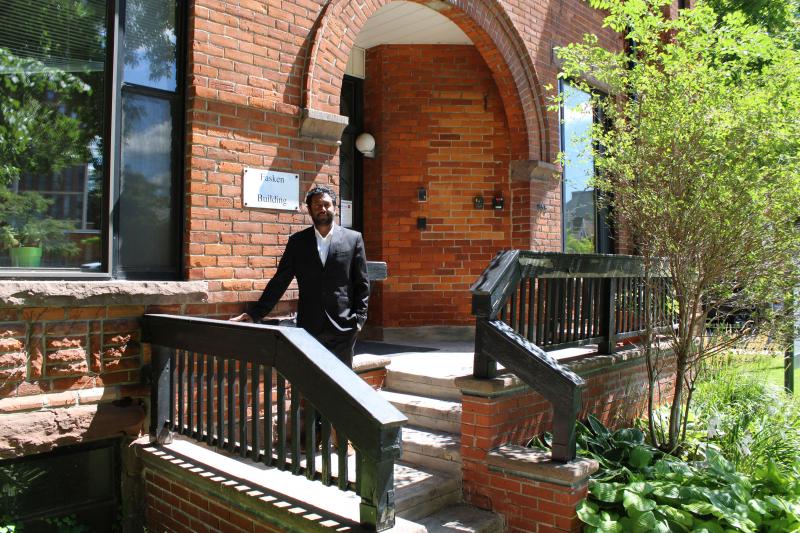 Over 50 years ago, students from the University of Toronto’s Faculty of Law received summer project funding from a federal program then-named, Opportunities for Youth. 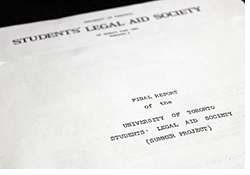 “We trust that we have fulfilled our undertaking to convey legal information to those unable to obtain it elsewhere. In this process we have gained valuable experience of, and insight into, the legal system of which will eventually form a part,” write the funding report’s signatories, Charles F. Scott Jr. (BA 1969 VIC, LLB 1972) and Peter D. Quinn (BA 1969 VIC, LLB 1972), members of the U of T Law class of 1972, the class responsible for establishing U of T’s Student Legal Aid Society (SLAS) in 1969.

“The students who organized [in the early 1970s] to provide desperately needed legal services to impoverished Torontonians, laid the foundation for what has grown into Downtown Legal Services,” says Prasanna Balasundaram, director of the community legal clinic and clinical legal education program at U of T’s Faculty of Law.

“That original spirit of improving access to justice carries on with the students who step into the clinic today.”

During its first years of operation, the U of T SLAS, was an entirely student-led initiative, supported by faculty advisors and lawyer volunteers, and was a recognized student legal aid society under Ontario’s then Legal Aid Act.

The Students’ Administrative Council (now U of T Students' Union) provided two rooms for the SLAS’s Campus Legal Assistance Centre (CLAC) at 44 St. George Street. Ontario Legal Aid Plan, by way of the “Student Defender” office in Old City Hall, distributed suitable cases that could be handled by law students at U of T and Osgoode Hall Law School at York University.

"This is in keeping with the idea that a great University should concern itself with its neighbours and not be restricted in its involvement with those immediately connected to it," note the report’s authors.

In the summer of 1971, SLAS also operated 16 community “clinics” in partnership with established social agencies, employing 23 law students who handled a total of 710 cases, from convictions to small claims court.

Memories from some of the more than 5,000 alumni who have worked at Downtown Legal Services

Named Downtown Legal Services (DLS) in 1982, the clinic now specializes in six areas of law including, housing, family, employment, criminal, refugee and immigration, as well as university affairs, representing U of T students on issues related to the Code of Student Conduct or Appeals of University Decisions.

The clinic today is housed in the Fasken building, a three-story Victorian house at 655 Spadina Avenue, where nearly 2,000 clients are served each year by 100 student caseworkers and volunteers, who are supervised by five staff lawyers and its director. More than 5,000 U of T Law alumni have participated in the clinic’s community work since its inception.

“I went into law school thinking I would be a labour lawyer. [At law school] I realized immigrants had no representation,” she says.

"It wasn't just me who went into immigration refugee law – a lot of people who went through this program stayed within ‘people law’.”

Like Jackman, recent U of T Law graduate Rachel Bryce (JD/MGA 2021) is today a practising refugee and immigration lawyer.

“DLS is hands-down the best experience I've had at law school,” she says.

“It offers the perfect mix of advocacy, activism, client counseling and legal work – and that opportunity is unparalleled.”

A anniversary panel discussion on October 20

On Thursday, October 20, Balasundaram, who in 2020, was among the lawyers representing refugees who helped strike down the Safe Third Country Agreement in a federal court, will moderate an anniversary panel discussion, with student caseworker Nina Patti and former client Rossana Ibarra.

“The panel will explore how law students at DLS develop insights into the social reality of law and legal institutions while making a tremendous impact on the lives of clients,” says Balasundaram.

Patti, a second-year law student, says being a caseworker in the clinic’s employment law division has been a highlight of her law school experience. It has given her valuable, hands-on experience, including negotiating a settlement at a Human Rights Tribunal of Ontario mediation, as well as representing a client before the Ontario Labour Relations Board.

“Without DLS, most of my clients would not have been otherwise able to access legal help, and I am proud to be part of an organization that provides such a needed service,” she says.

“The people involved in the SLAS were great. I remain very proud of my association with all of them,” says Prichard.

Funding for Downtown Legal Services is provided by Legal Aid Ontario, the Law Foundation of Ontario, U of T’s Faculty of Law, U of T students and donations from alumni and friends.