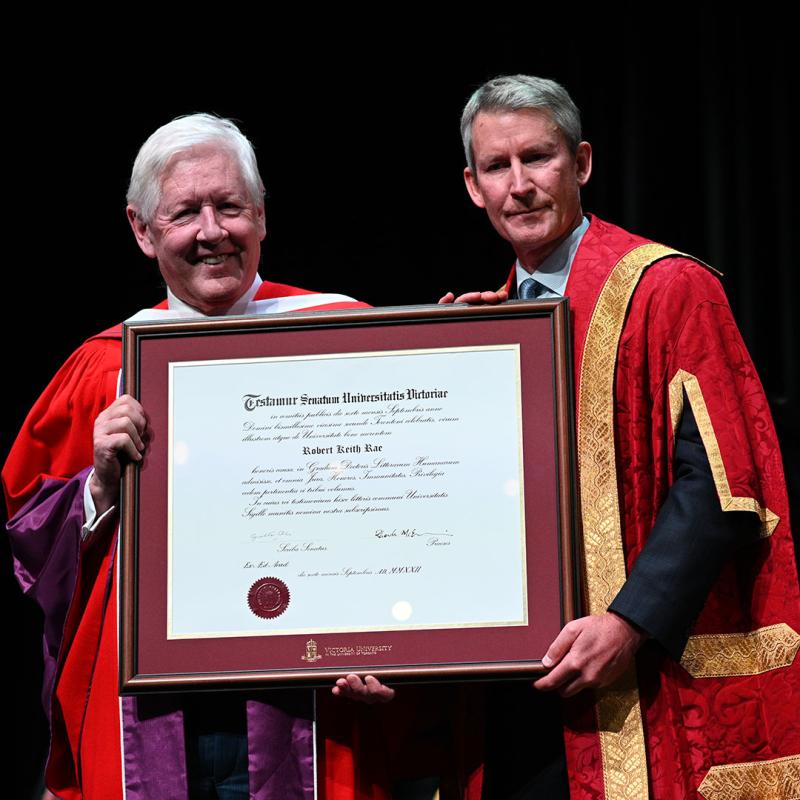 At Victoria, Rae was the David and Ann Wilson Distinguished Professor of Public Policy, and he taught a seminar every year on "Corporate Citizenship, Sustainability and Ethics" in the highly respected Vic One program. The college recognized him for his distinguished record of national and international public service.

"Bob Rae exemplifies the intellectual rigour and passion for shaping our world that we strive for at Victoria University in the University of Toronto. He has spent his entire career as a catalyst for change and a champion of human rights here at home and globally. We are immensely grateful for the way that he inspired students to consider what they can do to make the world a better place," said Dr. Rhonda McEwen (PhD 2010), president and vice-chancellor.

"In conferring an Honorary Doctor of Humane Letters, honoris causa, we recognize Mr. Rae’s exemplary service to community and extraordinary commitment to social justice and education."

Rae currently serves as ambassador and permanent representative of Canada to the United Nations in New York. Prior to this appointment, he served as Canada’s special envoy on humanitarian and refugee issues, continuing the important work that he began in 2017 as Canada’s special envoy to Myanmar while also addressing other pressing humanitarian and refugee issues around the world.

The former premier of Ontario and former interim leader of the Liberal Party of Canada, Rae was elected 11 times to federal and provincial parliaments. He stepped down as a member of Parliament in 2013 to return to legal practice and, in particular, to work with Indigenous communities and continue his work in education, governance and human rights.

Rae taught law and public policy at the University of Toronto and in the Vic One program at Victoria College, and was a partner and senior counsel to the law firm OKT LLP from 2014 to 2020, specializing in Indigenous law and constitutional issues.

Originally published by Victoria University in the University of Toronto