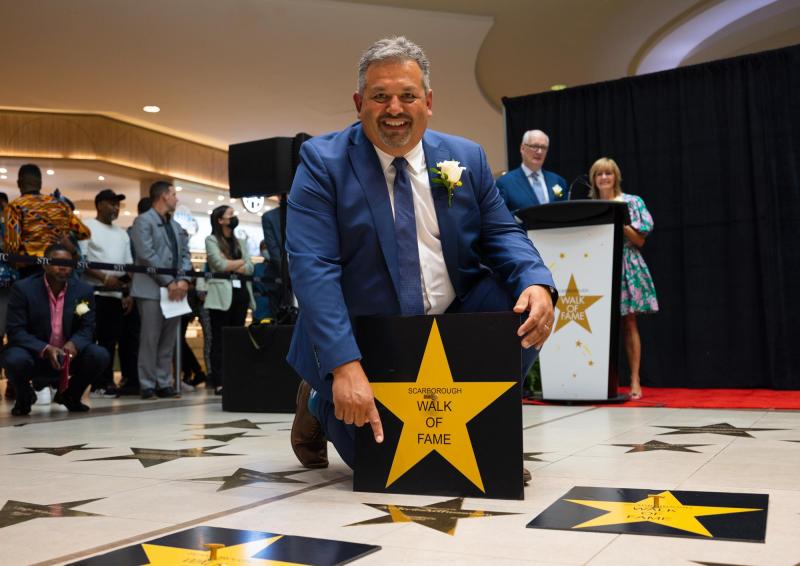 U of T Scarborough CAO Andrew Arifuzzaman was inducted into the Scarborough Walk of Fame during a special ceremony on Sept. 15 at Scarborough Town Centre (photos by Don Campbell)

When U of T alum Andrew Arifuzzaman (MBA 2008) first joined U of T Scarborough in 2007, one of his first acts was to literally make the campus more open to the community.

Shrouded by trees and shrubs, the campus was barely visible from nearby streets. The decision to do a tiny bit of landscaping was largely symbolic of what would take place over the next 15 years.

“The campus was in really good shape, but not many people knew about it,” says Arifuzzaman, who was hired as chief strategy officer before eventually taking on the role of chief administrative officer.

“We wanted to start breaking down barriers and create a university that was more visible and where our community felt welcomed. We also wanted the campus to be a source of pride for the community. Everything we’ve done over the years has been dedicated to accomplishing that goal.”

On Sept. 15, Arifuzzaman took part in a celebration of community pride to mark his induction into the Scarborough Walk of Fame.

Community consultation has been a key part of Arifuzzaman's work

U of T Scarborough has undergone significant growth during Arifuzzaman’s tenure. Projects he’s been involved with include nine new buildings completed or currently under construction, renovations and retrofits to existing buildings, and major landscape projects such as the Valley Land Trail. This development has been crucial in supporting enrolment and programming growth on the campus over the last two decades.

Much of this growth was outlined in the UTSC Master Plan, a project that set out the evolution of the campus over the next 50 years that Arifuzzaman led during his first year at U of T Scarborough.

“One of the guiding principles in developing the campus is that our students and our community deserve world-class facilities,” he says. Community groups and residents were heavily consulted in drafting the master plan to deliver projects that would improve the overall quality of life in the community, something Arifuzzaman says continues to be standard practice for the campus.

The Toronto Pan Am Sports Centre (TPASC) is a case in point. The facility, which opened in 2015 and is co-owned by the university and the city, not only helped generate 76 per cent of medals won by the Canadian team at the recent Tokyo Olympics, it also offers community access to a world-class pool, something that was unimaginable less than eight years ago.

It was these types of relationships that made it possible to run some of the largest and most successful community-based pandemic programs in Canada, says Arifuzzaman. UTSC partnered with the Scarborough Health Network to re-locate a COVID-19 assessment centre to Highland Hall, which ended up being the largest COVID testing centre in the GTA. Highland Hall was also converted to a packaging centre to help local food banks when the pandemic first hit. Arifuzzaman says these initiatives came together quickly in large part due to the trust developed over many years from working together on various projects.

A commitment by these community organizations to deliver better, more accessible health-care in Scarborough is a big reason why the Scarborough Academy of Medicine and Integrated Health (SAMIH) is underway, says Arifuzzaman. Once completed, the facility will help train doctors, nurses, physical therapists and life sciences students, while also recruiting students from local communities in Scarborough.

In addition to his role at U of T Scarborough, Arifuzzaman is chair of the board for Ontario Shores: Centre for Mental Health Sciences, chair of board for TPASC, and has served as a strategic advisor for the Toronto Zoo and Youthlink, an agency offering counselling, housing, education and other community-based programs for youth and their families.

While Scarborough has recently enjoyed a “glow up” in media and popular culture, Arifuzzaman says the narrative is being driven by things that residents have long known to be great about Scarborough.

We have amazing people, folks with big hearts and immense pride in their community

“We always hear about our food and the culture being second to none, but Scarborough also has most waterfront and the best urban parks in Toronto,” says Arifuzzaman, who first moved to Scarborough in the late 1980s.

“We also have amazing people, folks with big hearts and immense pride in their community. I’m honoured that I was able to play a small part in helping build that sense of pride.”