When Judy Goldring was named one of the Top 100 Most Powerful Women for 2012 by the Women’s Exchange Network, they cited her leadership in business and her volunteer activities at U of T and on behalf of the Juvenile Diabetes Research Foundation.

Judy Goldring received her BA in Economics from U of T in 1987 and went on to complete her LL.B at Queen's University. She was called to the Ontario bar in 1993. In 1998, she joined AGF Management Limited, a publicly traded global investment management firm, and is now its executive vice-president and chief operating officer.

At AGF, Goldring is responsible for operations, IT, legal, compliance and human resources and compensation, at an enterprise-wide level, supporting the firm’s Canadian and global offices.

Goldring was appointed to the University of Toronto’s Governing Council in 2007 and is now its vice-chair. Since her appointment, she has served on the Council’s executive committee, the senior appointments and compensation committee, the honorary degrees committee and others.  She has just been acclaimed as the Chair-designate beginning in July 2013.

Her commitment to U of T and Victoria College is well illustrated by her philanthropic support for the Goldring Student Centre, now under construction. The $4-million donation was part of a $15.1-million gift made by the Goldring family. The family also contributed $11 million to the Goldring Centre for High Performance Sport and $100,000 towards the restoration of Soldiers’ Tower at U of T.

Goldring is also involved in a number of charities, including the Juvenile Diabetes Research Foundation. She has been involved in the Toronto JDRF Ride for Research for 10 years, acting as its co-chair since 2007. Under her leadership, she has helped raise more than $11 million for diabetes research.

"There are no breaks from Type 1 diabetes and no end to the constant management and vigilance,” Goldring said, “but what we do have is hope. The money raised for research is making a difference and is funding discoveries that improve the quality of life for diabetics every day.” 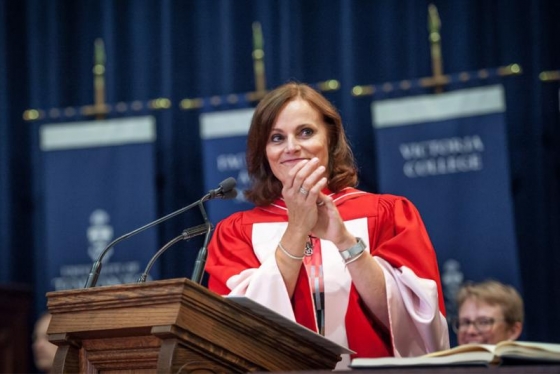