A three-time Olympic Gold Medalist and member of Canada's successful National Women's Hockey Team, Jayna Hefford has established herself as one of Canada's top female hockey players. She was a U of T student when she scored the gold medal winning goal at the 2002 Olympic Winter Games in Salt Lake City. Since graduating she has won two more Olympic gold medals.

One of Canada’s most decorated athletes, Jayna Hefford has played an integral part in the success of the Canadian National Women’s Hockey Team and Olympic team. It was Hefford’s goal in the final second of the game against the U.S. at the 2002 Salt Lake City Winter Games that won the Olympic gold medal for Canada. Since then, she has gone on to win gold at both the 2006 Turin and 2010 Vancouver Olympic Winter Games.

While studying physical education at U of T, Hefford also played on the Toronto Lady Blues hockey team.

"The Phys. Ed. Program at U of T is one of the best, I think. The courses were tough and challenging, which made getting my degree here something I’m proud of. I know I had to work hard for it."

Hefford combined her studies with her hockey career with considerable success. She is a six-time World Champion and was named Top Forward at the 2004 World Championships. She also played an integral part in Team Canada's win at the 2000 World Championships, where she scored two crucial goals in the final game to tie the score and force it into overtime. 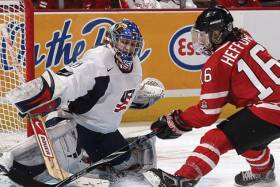