What are Canada's chances? Stats expert weighs in on World Cup odds 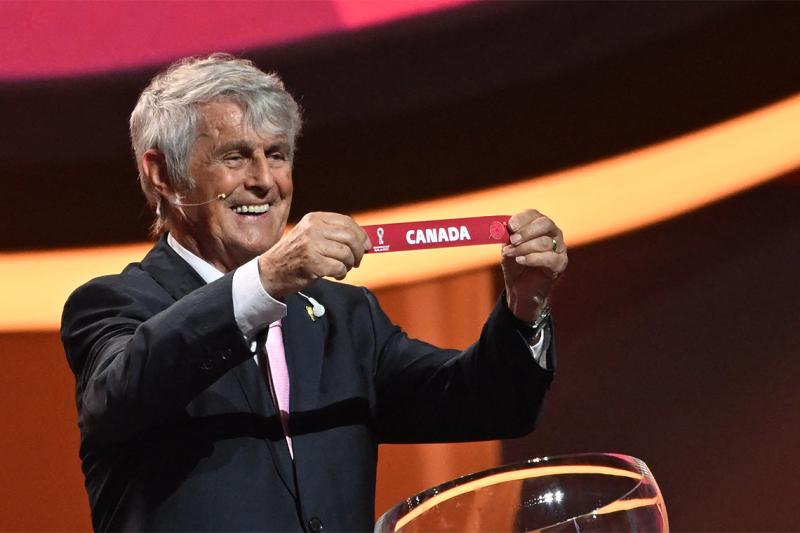 The three countries stand in the way of the Canadian men’s soccer team reaching the knockout stages of the FIFA World Cup – a feat that would make history.

“We’re the underdogs,” Canadian soccer star Alphonso Davies said on the livestreaming platform Twitch. “At the end of the day, it doesn’t matter. We’re there to compete – and we will compete.”

After the draw was announced on Friday afternoon, soccer fans and pundits around the world were left to debate their team’s chances of advancing.

Though he admittedly doesn’t follow soccer very closely, Jeffrey Rosenthal (BSc 1988 UC) is better placed than most to calculate Canada’s odds of success.

The alumnus, who is a professor in the University of Toronto’s department of statistical sciences in the Faculty of Arts & Science and has a PhD in math from Harvard University, received the Committee of Presidents of Statistical Societies’ highest honour and wrote five books – including the national bestseller Struck by Lightning: The Curious World of Probabilities (2005).

An additional bonafide: In 2019, he tipped the Toronto Raptors to win the NBA Finals against the Golden State Warriors using a “simple” statistical model he developed based on regular season performance.

Rosenthal shared his initial observations with U of T News immediately after the draw.

Canada has been drawn with Belgium, Croatia, and Morocco in World Cup Group F. How likely is it that Canada will finish in the top two and advance into the Round of 16?

Well, it is going to be tough. Canada almost made it to Pot 3 before being edged into Pot 4 by Tunisia at the last minute. That means the other three teams in our group are all ranked higher than we are. Belgium is currently ranked second in the world, Croatia is 16th and Morocco is 24th, while Canada is now ranked 38th. So, if I were a betting man, I would have to bet against Canada advancing.

On the other hand, Canada has been playing fairly well lately. And soccer matches are inherently unpredictable because of the low scores – just last week 62nd-ranked North Macedonia defeated sixth-ranked Italy 1-0 and knocked them out of the cup. So, it is certainly possible that Canada will advance. I haven't done a careful study, but if you ask for my gut feeling, I would say Canada has about a 30 per cent chance of advancing to the knockout stage.

The last time the Canadian men played in a World Cup, in 1986, they lost all three of their group stage games and didn't score a single goal. How likely is it that Canada gives us at least one goal this time around?

And don't sell their 1986 performance too short. They may not have scored, but they only narrowly lost 1-0 to top-tier France, staying even until the final 11 minutes. I remember it well, because I was a teenager backpacking in England at the time. Everyone I spoke to was impressed that Canada had kept the match so close against the formidable French team.

No team outside of Europe and South America has ever won the World Cup. What's the probability of Canada causing the biggest upset in World Cup history by winning the whole thing?

Very small, unfortunately. I haven't done a detailed statistical analysis of this. But with so many stronger and more experienced teams in the cup, it is virtually inconceivable that Canada will be this year’s champion. Maybe one chance in a thousand or so.

Canada has a few well-regarded and upcoming players, but Alphonso Davies stands out as an established, world-class player at the highest level. If he were to miss the World Cup for some reason, how badly would it hurt Canada's chances?

Soccer is a team sport, but individual stars can make a big difference – especially on a team like Canada with fewer top players. On the other hand, Davies missed six matches this year due to COVID-19 and myocarditis, but Canada won four of them anyway. So, Canada can still win games without Davies, too.

Perhaps a more positive way to think about it is that Canada is a solid squad even without Davies, and if Davies does manage to remain healthy and join the team in Qatar then that will provide them with an extra bonus.

How was Canada’s group put together in the first place? It seems like the make-up of a group can have a big impact on a team's chances of progressing. How does FIFA do this and is it fair?

I'm glad you asked – this is the focus of my latest research project. Assigning the groups is challenging because of all the rules and restrictions – each group must include one team from each of the four pots, no group can have more than two teams from Europe or more than one from South America, etc. FIFA deals with this by randomly selecting teams, one at a time, and placing each one in the next available group that will not violate any restrictions.

The FIFA method works OK, but it skews the probabilities so the various possible valid assignments do not all have the same chance of occurring. This changes the probabilities of what groups the teams end up in in unexpected ways.

For example, if every valid complete group assignment were equally likely then the United States should have a probability of nine per cent of ending up in the coveted Group A with Qatar. But under FIFA's sequential draw method, that probability jumps to 12.5 per cent – much higher. So, the U.S. ended up with a significant advantage going into the draw simply due to the idiosyncrasies of FIFA's method of conducting it.

Is there a way to improve the draw procedure so the correct probabilities are maintained while still meeting FIFA's requirements in terms of the pots, minimizing teams from the same continent being drawn together and so forth?

Yes, indeed. Jointly with Gareth Roberts of the University of Warwick, we have developed several alternative methods of conducting the World Cup group draw, which gives every valid complete assignment exactly the same probability of occurring, while still following all of the specified restrictions about the group compositions.

Our simplest method uses a computer algorithm called a “rejection sampler,” which is fast and simple and gives precisely equal probabilities. Our second method involves picking teams from balls in urns, one at a time, similar to FIFA's approach – except carefully adjusting the numbers of balls at each step to ensure equal probability of every valid assignment. Our third method involves repeatedly swapping the group assignments of different pairs of teams to mix up the groups in exciting and unexpected ways, while always keeping equal assignment probabilities.

I have created a website where all three of our methods can be tried interactively. I hope that readers will check it out to see first-hand how the various draws work.

In addition to making the groups, the World Cup draw itself is a popular television spectacle for fans – would any of these proposed draw methods still make for compelling viewing?

They would! Not so much our first method, which has the computer do all the work behind the scenes. But our second method involves picking balls from urns, which is similar to the current FIFA method – so it should be just as compelling. And our third method might be the most entertaining of all since pairs of teams are repeatedly swapped leading to unexpected and surprising and exciting changes in the group compositions.

We actually developed those last two methods specifically with the fans’ entertainment in mind. So, we think they would work very well. In fact, we hope that FIFA will check out our webpage themselves and then ask to use our methods for the next World Cup.