U of T alumna April Julian stars in new Netflix series Is it Cake? 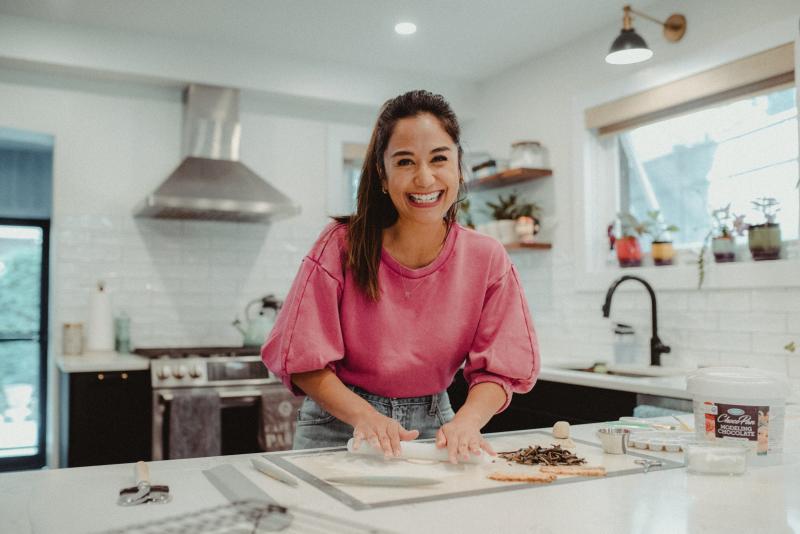 April Julian was the only Canadian cake designer selected to compete on Netflix’s new hit baking show, Is it Cake?Photo credit: Annabis Photography.

In July 2020, many of us were asking the same questions: How long will the COVID-19 pandemic endure? And is everything cake?

The latter question arose in response to viral social media videos featuring bakers cutting into ultra-realistic cakes. What appears to be a red Croc, a roll of toilet paper or a potted plant turns out to be layers of cake and buttercream, prompting a range of reactions online, including delight, existential dread and a slew of memes questioning if everything is, in fact, cake.

The question has re-emerged with the launch of Netflix’s new hit baking show, Is it Cake?, which premiered March 18. The show features nine masterful bakers who compete for a grand prize of US$50,000 by creating cakes so realistic that they are indistinguishable from real-life objects — and can dupe a panel of celebrity judges.

Among the bakers is University of Toronto alumna April Julian (BA 2003 INNIS), who earned an honours bachelor of arts from U of T in 2003 as a member of Innis College. A Toronto-based cake designer specializing in whimsical and mind-bending cake art, she was the only Canadian selected to participate on the show.

“I was blown away,” she says, recalling the unexpected invitation she received from Netflix’s casting agency last summer. “I didn’t believe it initially.”

Before she knew it, she was flying to Los Angeles to film the series. Her competition was intimidating — some contestants had been on baking shows before, others had established bakeries — but Julian’s nerves quickly faded.

“This is the most fun thing that has ever happened to me,” she says. “It was just laughing for weeks on end. Of course, it was also hard work. We were baking pretty much nonstop for eight or nine hours straight. The challenges were really difficult, but it was so worth it.”

Julian is no stranger to hard work. In addition to making custom cakes and teaching cake decorating classes, she works full time as the director of education at the Canadian Civil Liberties Association (CCLA) — a role her U of T courses in employment relations helped prepare her for.

“I’m teaching learners of all ages about their fundamental rights and freedoms in Canada and to respect human rights and civil liberties,” she says. “With labour relations courses, you look at legal issues related to labour and union disputes, so I had a bit of practice thinking about the law, employment rights and rights in general.”

Don't close yourself off to just being a practical person. Allow yourself to make time for all the things you care about and are interested in, and then see where that takes you.

As an undergrad, she studied economics as well as employment relations — areas she “felt could be transferable to a lot of different career paths.” Her time at U of T offered more than career preparation, though.

“I made my absolute best friends for life in that program,” she says. “I met them in my first economics course, and we've been friends ever since. I'm grateful for my time there.”

Julian says her roles as cake decorator and director of education are “very separate worlds,” but she approaches them with the same mentality.

“No matter what I'm working on, I'm always putting my absolute best out there, and I got noticed for that effort and skill. At the CCLA, I'm now the director of the education program, but I started off as an intern. With the cakes, I was just doing it on the side, and now I'm on Netflix.”

While Julian has always enjoyed baking, her interest in cake decorating began in 2007 when celebrity pastry chef Ron Ben-Israel appeared on The Martha Stewart Show.

“He was making a sugar orchid for one of his very elaborate wedding cakes,” Julian recalls. “I felt like I could do that, so I boldly wrote to him and said, ‘I want to learn what you do’ — and he was nice enough to write me back.”

Ben-Israel offered tips on where to take lessons, and Julian started practicing. A request for a Jordan high-top sneaker cake led to her first foray into the world of hyperrealistic cakes.

“My husband happens to be a sneakerhead, and I wanted really badly to impress myself but also him by making it as realistic as possible,” she says. “I dove into the challenge — made the shoelaces textured, shined up the patent leather on the shoe — and I got a great reaction from it. I was hooked from that point on. I'm observant and good at replicating details, so it’s a good match in terms of my natural skill set.”

Julian doesn’t know where her cake decorating journey will lead next, but after her Netflix debut, she’s open to any possibility.

“I’m super risk averse, and this really forced me out of my comfort zone. It forced me to do something different that I'd never done before,” she says. “It’s a risk that paid off huge for me, so it's taught me that maybe I need to take put myself out there a bit more and open myself up to other opportunities that normally I would shy away from.”

It’s advice she believes is also beneficial for U of T students who are navigating their careers.

“Don't close yourself off to just being a practical person. Follow the career path you think is going to lead to the success you desire, however you define that success, but allow yourself to make time for all the things you care about and are interested in, and then see where that takes you.”