From Roberta Bondar to Oscar Peterson: Here are 12 famous honorary degree recipients from U of T convocations past 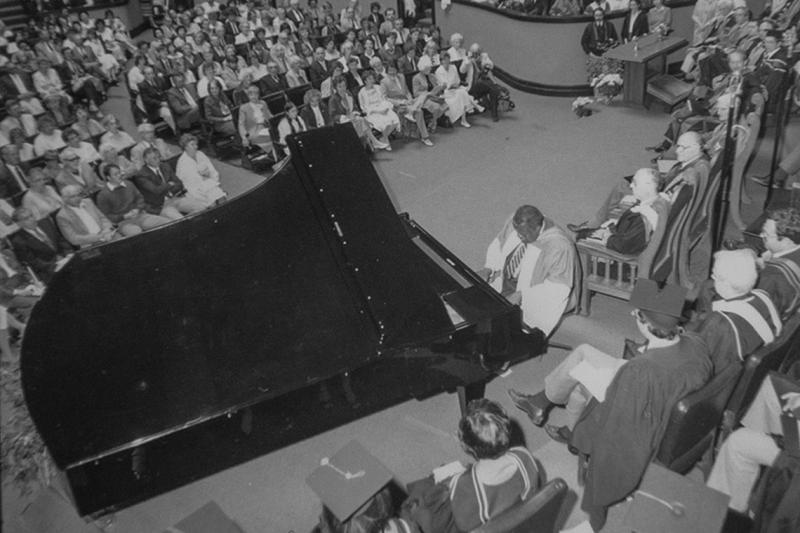 Jazz legend Oscar Peterson, who received an honorary degree from U of T, plays the piano at a convocation ceremony in 1985 (photo by Robert Lansdale/University of Toronto Archives)

Since Henry Holmes Croft (LCD 1850) was awarded a Doctor of Civil Law in 1850, the University of Toronto has upheld a long tradition of recognizing individuals with honorary degrees.

Whether it was the first Canadian female astronaut or a winner of the World Series championship, the degrees are awarded to those whose accomplishments inspire U of T graduates, and who bring honour and distinction to the University by their very presence.

As U of T’s spring convocation continues this week, U of T News photo/video coordinator David Lee and archivist Marnee Gamble found several historical photos of impressive honorary degree recipients through the ages:

At spring convocation in 1992, Roberta Bondar (PhD 1974, Hon DSc 1992, Hon DSacLt 1993 TST) was awarded a Doctor of Science, in the category of “Academic Disciplines and Professions – Aeronautics.” The honour coincided with the 25th anniversary of Erindale College (known today as U of T Mississauga). Bondar, the first Canadian woman in space, has a PhD in neuroscience from U of T.

Cito Gaston (Hon LLD 1994), the manager who guided the Toronto Blue Jays to back-to-back World Series championships, received an honorary degree from U of T in 1994 – a Doctor of Laws in the category of “Academic Disciplines and Professions – Sport.”

At spring convocation in 1998, June Callwood (Hon LLD 1998, Hon DSacLt 1998 TRIN) was awarded a Doctor of Laws in the “Public/Community/Volunteer Service” category. The journalist, author and social activist, who died in 2007, was also honoured with an honorary degree from Trinity college and had a professorship in social justice at Victoria College named after her.

Legendary jazz pianist Oscar Peterson (Hon LLD 1985), the multiple Grammy Award winner, was awarded a Doctor of Laws honorary degree in June 1985 in the “Arts – Music category.” The Montreal-born Peterson was a renowned soloist and his work also appears on over 200 albums by jazz greats like Ella Fitzgerald and Dizzy Gillespie. Louis Armstrong called Peterson “the man with four hands.” A U of T Mississauga residence hall was named in his honour.

Mary Robinson (Hon LLD 1994), the first woman to become president of Ireland and hold the office of United Nations high commissioner for human rights, received a Doctor of Laws in the “Public Affairs category” during a special convocation ceremony in 1994.

On June 1, 1964, classical pianist Glenn Gould (Hon LLD 1964) received a Doctor of Laws. The multiple Juno- and Grammy-winning artist was an alumnus of the Royal Conservatory of Music, which founded the Glenn Gould School in 1997.

His Holiness the 14thDalai Lama (Hon LLD 2004), whose religious name is Tenzin Gyatso, was awarded a Doctor of Laws in the “Public Service” category on April 27, 2004. He received the 1989 Nobel Peace Prize for heading non-violent opposition to China's occupation of Tibet.

Christopher Plummer (Hon LLD 2003), an Oscar-winning actor whose career has spanned six decades, was awarded a Doctor of Laws on June 16, 2003 in the “Arts – Theatre” category. The Toronto-born actor has also won a Golden Globe, two Tonys and two Emmys.

In June 1999, ballet icon and U of T honorary degree holder Karen Kain (Hon LLD 1993) was on hand to see fellow dancer Mikhail Baryshnikov (Hon LLD 1999) receive his Doctor of Laws in the “Arts – Dance” category. Kain, one of Canada’s most renowned dancers, was awarded a Doctor of Laws in 1993. Baryshnikov is one of the most celebrated male ballet dancers in history.

In June 1995, former Paralympian and humanitarian Rick Hansen (Hon LLD 1995) received a Doctor of Laws in the “Public Affairs” category. Hansen, who was left paralyzed from the waist down after an accident in his youth, won six Paralympic medals and three world championships in wheelchair racing. He founded the Rick Hansen Foundation in 1988 to fund spinal cord research and to change attitudes toward people with disabilities and remove barriers.

In 1977, astronomer Helen Sawyer Hogg (Hon DSc 1977), known internationally for her research on globular star clusters, received an honorary degree, a Doctor of Science in the “Academic Disciplines and Professions – Astronomy” category. The honour coincided with the sesquicentennial of the University of Toronto. Here she is pictured beside the David Dunlap optical telescope in the early 1960s.

Stompin' Tom Connors (Hon LLD 2000) received a Doctor of Laws from U of T on June 19, 2000, in the “Arts – Music” category. The Juno-winning singer-songwriter, who played guitar and fiddle, has also received honorary degrees from St. Thomas University and the University of Prince Edward Island.