'I love bringing people together': U of T grad focuses on social justice, inclusivity and community-building 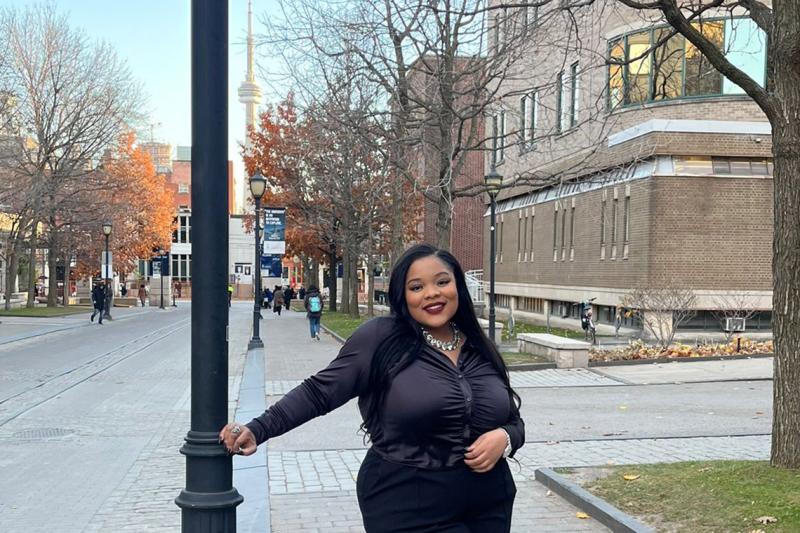 Lashae Watson, who graduated this week from the Faculty of Arts & Science, wants to help create social change that is rooted in equity, diversity, inclusion and access (photo courtesy of Lashae Waston)

Lashae Watson (BA 2022 VIC) spent much of her time at the University of Toronto creating spaces and opportunities for students to feel seen, heard and understood.

“I come from a family of community leaders and helpers, and I've seen the power of education,” says Watson, a member of Victoria College who is graduating this week from the Faculty of Arts & Science with an honours bachelor of arts degree in equity studies and human geography, with a focus in urban geography.

Upon arriving at U of T, Watson was convinced she was going to study criminology en route to becoming a criminal lawyer. However, she says she had difficulty finding opportunities to explore her passions. So, she visited Victoria College’s registrar and explored several potential areas of study, emphasizing her desire to pursue a degree that would better enable her to be a part of social change rooted in equity, diversity, inclusion and access.

The registrar guided her towards equity studies and human geography – and she soon began taking courses in the field.

“I thought, ‘Yeah, this is me’… I knew instantly that I was going to be happy – I knew this was my place,” Watson says. “It became apparent that human geography was going to play a critical role in my life because it instantly enabled me to better articulate many of the social injustices I was both witnessing and experiencing, but didn't have the terminology to explain.”

These open and honest conversations are not often had in institutional spaces. I was grateful.

She highlights the importance of having Black and racialized professors and instructors.

“For the first time, I heard a professor say there was slavery in Canada,” she says. “That was a pivotal moment for me because I knew that – but these open and honest conversations are not often had in institutional spaces. I was grateful.”

That contentment and feeling of purpose extended to Watson’s efforts outside the classroom. She joined groups and events focused on making the university experience more equitable and inclusive.

As Halloween approached, the group hosted a cultural appropriation event, discussing what was appropriate and inappropriate for costumes.

“That was really important for me because I have been in spaces where people were mimicking my culture and that of my loved ones,” says Watson. “So it was important to know that I was around like-minded folks who cared about those experiences.”

We're so focused on trauma – there's so much more to us than that. There's celebration, there's love, there's activism, there's care.

She was also involved in campus events such as Arts at the Intersection, hosted by the Victoria University Students’ Administrative Council (VUSAC) equity commission.

“This was an amazing opportunity for racialized artists to debut their work,” says Watson, noting she, too, had shared her poems. “It was the first time that I had ever let someone else read my poetry. That was big for me.”

Watson also worked as the events director for Vic Blvck (Victoria College’s Black Student Network), fostering inclusivity by creating and holding space for Black and other students to come together and feel welcomed and supported.

“I love bringing people together,” Watson says. “And that became my prerogative in my role at Vic Blvck: creating opportunities for Black students to come together to talk about our experiences, including our struggles and our triumphs.

“Very often, when we talk about the experiences of Black, Indigenous and racialized groups, we're so focused on trauma – and while it’s incredibly important that we hold space to have those conversations, there's so much more to us than that. There's celebration, there's love, there's activism, there's care in our spaces, and I wanted to reiterate that every time we came together.”

Everything I do is for my younger family members and loved ones, because I want them to be in spaces where they feel safe and heard.

Watson shares one especially rewarding memory of her time with Vic Blvck: a healing session she helped organize. A student said to her, “I feel good. I feel like I've spoken about things that I had never spoken about before.”

Watson took part in several conferences, including Victoria College's Racism and Anti-Racism in Higher Ed Conference, where she was one of three student panelists.

What drives Watson’s commitment to fostering a culture of inclusivity?

“Everything I do is for my younger family members and loved ones, because I want them to be in spaces where they feel safe and heard,” she says. “If I'm making changes now, when they get to these same spaces, it’s my hope that that will be the case.”

Watson is now considering completing a master of social work degree. Her goal is to become a school trustee within the next four years.

“I’m committed to fostering social change rooted in equity, diversity and inclusion,” she says. “And my goal is to support people in the same way I've been supported. I believe social work will give me the ability to do that.”

She would also be following in her mom's footsteps.

“My mother was a single mom. She went back to school when I was young. She did it all. She got her college diploma then her bachelors of social work, and then her master of social work. Coming from a family of such strong and perseverant women, there's no way for me not to be strong.”