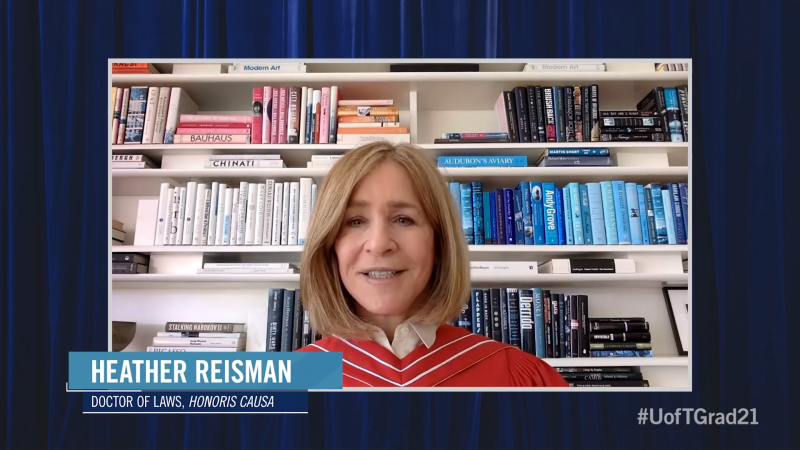 Heather Reisman (Hon LLD 2021) knows the importance of innovating. In the 1990s, she saw an opportunity for large-format bookstores in Canada and established Indigo Books – turning it into the country’s largest bookseller – and in 2009 she co-founded e-reading platform Kobo.

Along the way, she became one of Canada’s most recognized advocates for literacy and the joy of reading.

In 2019, she and her husband, Gerald Schwartz (Hon LLD 2016), donated $100-million to the University of Toronto to create the Schwartz Reisman Innovation Campus. The gift will bring together leading experts in artificial intelligence and medicine, entrepreneurs and the country’s largest concentration of student-led and faculty-led startups in a new two-tower complex on the university’s St. George campus. The donation also supported the launch of the Schwartz Reisman Institute for Technology and Society, whose mission is to explore the ethical and societal implications of AI and other emerging technologies.

Today, in recognition of her contributions as “a nationally esteemed business leader, an indefatigable champion of reading and literacy, and as an exceptional philanthropist,” Reisman received a Doctor of Laws, honoris causa, from the University of Toronto.

Born in Montreal in 1948, Reisman developed a love of reading at an early age. In an interview with Canadian Business in 2008, she recalled, at age 11, saving her allowance to join a book-of-the-month club and said she still had all her childhood books. She earned a bachelor’s degree in social work from McGill University, and took a job as a youth caseworker. “I felt then, and still do, that it is important to treat everyone with the same level of respect,” she told Canadian Business. “A CEO should not get one bit more deference than the most junior employee.”

Reisman eventually switched careers, establishing her own business consultancy. In the early 1990s, she did a brief stint as head of Cott Corporation, a soft drink company, where she learned she would prefer to sell a product she was passionate about. “While I enjoyed my responsibilities at Cott, I didn’t actually care if more soft drinks were sold in the world,” she told Canadian Business.

She left Cott and was looking for a new opportunity when Borders, the American bookseller, came looking for a Canadian partner. A deal to bring Borders to Canada never solidified, but something clicked for Reisman, and soon Indigo was born. She opened her first store in Burlington, Ont., in 1997, with an emphasis on its made-in-Canada origin and a year later started recommending books to customers, which she called “Heather’s Picks.” She bought out rival Chapters in 2001, diversified the company’s product line-up with more toys, home décor and gifts, and, in 2018, expanded into the American market.

Our mission, which is to help every child reach full potential, is in everything I think about all the time

Underpinning Reisman’s success at Indigo is a deep-seated passion for books, reading and literacy. She founded the Indigo Love of Reading Foundation in 2004 to provide funding for books in poorly resourced public school libraries. “Our mission, which is to help every child reach full potential, is in everything I think about all the time,” she said in the Canadian Business interview. “The lack of library resources in this country still shocks me.”

In her speech today to the Class of 2021, Reisman said that the current moment could look “a bit grim” when viewed up close, but she encouraged graduating students to take a wider view.

“You will see that this is a moment uniquely rich with possibility, opportunity and potential – in fact, a once-in-a-lifetime, game-changing transition moment,” she said. “We are finally open to doing in earnest the right things to reverse the threat of global warming. We are poised to embrace all the good that comes with living in harmony with our environment rather than at loggerheads with it.

“But there is much to do and so much innovation needed.”

Almost every field of endeavour is ripe with opportunity to rethink, reimagine, rebuild and invent

She urged today’s graduates to consider taking a human-centred approach to societal advancement.

“Almost every field of endeavour is ripe with opportunity to rethink, reimagine, rebuild and invent,” she said. “This is your inheritance.”

In 2009, the Financial Times listed Reisman as one of the top 50 businesswomen in the world. She has also been included in the Women’s Executive Network list of the Top 100 Most Powerful Women, and in 2015 was the first woman to be inducted into the Canadian Business Hall of Fame. She holds seven previous honorary doctorates and, in 2019, she was named an Officer of the Order of Canada.