How an NHL legend inspired a quest to understand visual processing 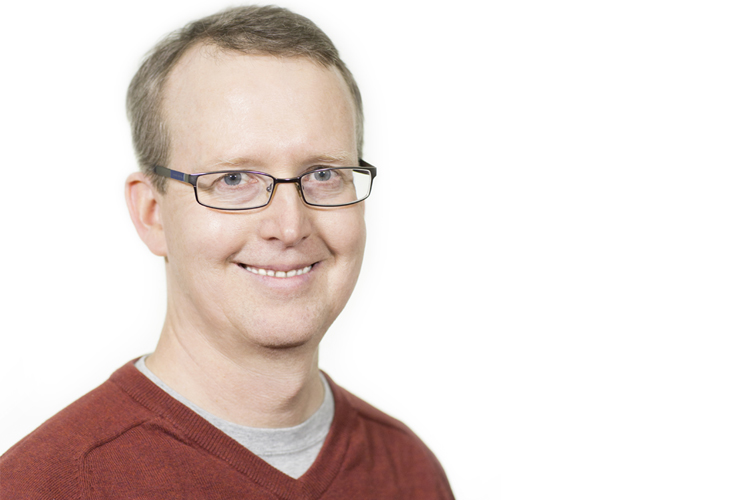 It’s all Wayne Gretzky’s fault. If it hadn’t been for perhaps the greatest player the game has ever known, psychology professor Jay Pratt might never have become a world-renowned scholar in the field of visual processing, one who has made unique and groundbreaking discoveries about how we see, what we pay attention to, and how that influences our actions.

For his impressive body of research and outstanding teaching at U of T, Pratt, a professor in the Department of Psychology, is being honoured with a 2017 Faculty Award. The annual prize recognizes U of T teaching staff who consistently demonstrate all-around excellence in both their scholarly work and in the classroom. Pratt is also is Vice-Dean, Research and Infrastructure for the Faculty of Arts & Science and is cross-appointed to the Toronto Rehabilitation Institute.

But what’s the Gretzky connection?

Pratt played sports as a kid while growing up in Edmonton, and was curious about that tunnel vision that can come about in the middle of an intense game – a teammate is wide open, but you just don’t see it. Then, he says, “this skinny, 17-year-old kid joined the Oilers, and easily became, within a year or two, the best player in the NHL. He wasn’t the best skater, he wasn’t the best shooter –what made him so great was what was in his head. The way he processed visual information was just different from other players.”

And so, a sports star and a scientist were born together.

Pratt’s discoveries in the field of attention and visual processing are no less than groundbreaking. For example, his data overturned a 60-year-old scientific law (that people sacrifice speed for accuracy when reaching for objects) by showing that we can adjust our perceptual input in a way that lets us be both fast and precise. He also discovered that our attention is drawn to animate moving objects (like animals) over inanimate ones (like balls), that reading numbers causes attention to shift to certain locations in the visual field, and that the way you see features on an object depends on whether you hold it in your hand or just look.

As well as influencing theoretical models across the field, Pratt’s findings have practical results too, showing that older and younger adults use visual data to plan limb movements in a fundamentally different way, that aging has detrimental effects on the muscles in the body except those that produce eye movements, and that playing action video games can improve eye-hand motor learning.

With more than 200 publications in his 20-year career, and 7,800 citations, Pratt has achieved an H-index of 44, outstanding in this field. He has attracted $4.7 million in research funding for the University, and won an Ontario Premier’s Research Excellence Award as well as multiple U of T Dean’s Excellence Awards.

As a teacher and mentor, peers describe him as gifted, while students praise his efforts to demonstrate the value of collaboration, help them launch multiple research projects and persist through to publication. A particular highlight of his seminar classes is the requirement that every student prepare a presentation every week. “The basis for this is this old saying that the best way to understand something is to teach it,” explains Pratt. Because there isn’t time in class for all students to present, five are chosen via lottery in the opening minutes. “The first couple of weeks,” says Pratt, “no one wants to win the lottery. But as they get more confidence – for the second half of the class, people always volunteer.”

This kind of creativity, willingness to learn and ability to inspire others are the key, say Pratt’s colleagues, to his incredible impact on the field of psychology. Pratt returns the compliment, saying that his students and his team energize him. “I’ve seen how one area of research can inform another area,” he says. “Looking for the connections in some way forces creativity, and when you have a nice broad base to work from, you don’t have to be concerned about whether the answers fit into a certain theory or not. You can be a little bit adventurous, and you can take some risks.” He tries to populate his lab with people who can bring new perspectives. “We have a lot of fun, we kick things around between us and find new places to go. I like that a lot.”

Gretzky helped Pratt in one more way. As a student at the University of Alberta, Pratt says, he actually once got a chance to run visual processing tests on the entire Oilers team. “Neither of my parents went to university,” he says, “so they never really understood what I was doing in the lab and why I was interested in it. Until the day I came home and told them about Gretzky, Messier, Anderson, Coffey, and Fuhr being in the lab. And then all of a sudden it made sense to them. They were fully behind it from that day forward. It was one of the better days of my research career!”

Professor Jay Pratt and the other 2017 Awards of Excellence recipients will be honoured at a recognition event on April 27.