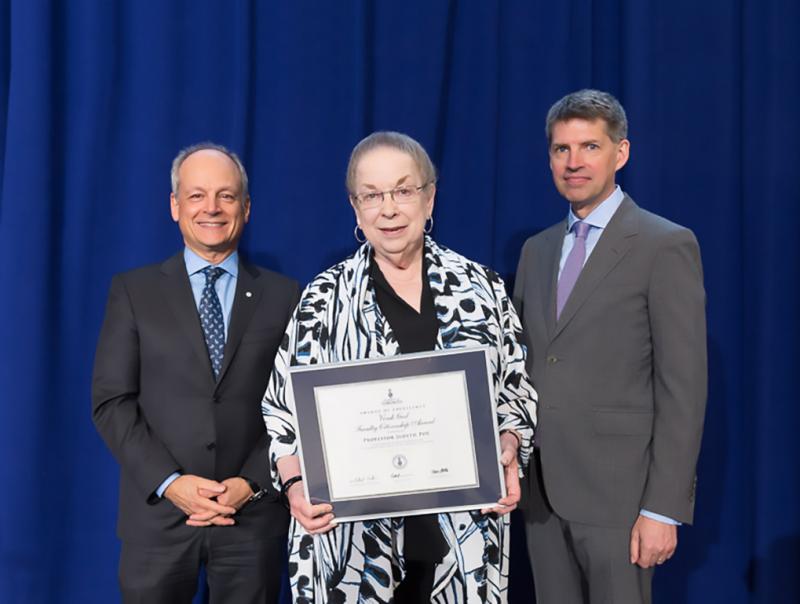 Professor Judith Poë has been named as one of this year’s recipients of the Vivek Goel Faculty Citizenship Awards for more than 45 years of extraordinary service to the University of Toronto, including volunteering on dozens of committees, negotiating important policies, organizing outreach programs and much more.

When Professor Judith Poë joined U of T Mississauga in 1970, the brand-new campus was just three years old and the atmosphere was full of possibility. “UTM was in its infancy,” she says. “So by participating in committees there was a real opportunity to influence the direction and development of the campus. I think that many of the people who were there in the early years got quite heavily involved in service work.”

For Professor Poë, who is a member of the Department of Chemical and Physical Sciences, “heavily involved” is an understatement. The breadth of her service is truly impressive. She has served on committees and councils, helped negotiate and shape policies, advised faculty and staff developing new programs, served on editorial boards, and volunteered for various national and provincial groups that promote her twin passions: chemistry and teaching.

Why such a range? “It would be difficult to be at the University of Toronto without developing diverse interests,” she says. “Just as the range of courses available allows students to sample areas of potential interest, the cornucopia of administrative as well as scholarly opportunities does the same for faculty.” Sometimes she volunteered from a sense of responsibility, sometimes because she felt she had the experience to make a valuable contribution, and sometimes for an exciting learning opportunity – but she always volunteered.

Naturally, some administrative tasks are more fulfilling than others, but Professor Poë makes the most of it where she can. “My advice to new faculty,” she says, “would be to reserve their creative talents for committees on whose work they feel they may have an impact.”

For example, Professor Poë, who has won multiple awards for teaching excellence, stepped up to chair the Teaching Stream Committee of the University of Toronto Faculty Association in 1996. “I am very pleased with the outcome,” she says. Together with then Vice-Provost Academic Paul Gooch, she wrote a new policy for Teaching Stream faculty appointments – a policy that created a genuine career path for the Teaching Stream and which has helped elevate the University’s classroom excellence in recent years byimproving the consistency and quality of instruction. This hiring model has since been adopted by universities across Canada.

Other outstanding work includes her service on the Task Force on Intellectual Property which wrote the University’s policy on copyright. She was also a member of the Ontario Disabilities Act Planning Committee, a project that helped make the university more inclusive. As Vice–President, Grievances of the Faculty Association she helped to forge a collegial relationship between the UTFA and the U of T administration. She served as Associate Chair of her department, as President of the Canadian Society for Chemistry, on the editorial board of the Journal of Science Education and Technology and with both the Ontario Confederation of University Faculty Associations and the International Union of Pure and Applied Chemistry. She has served on the Academic Board and as Chair of the Erindale College Council and currently sits on UTM’s Campus Council and chairs its Academic Affairs Committee.

Professor Poë’s obvious love of teaching is not disparate to her administrative success. “In the large-class teaching that I do, clear organization is essential,” she states. “As well, I tend to introduce new ideas in the form of a series of questions. This seems to work equally well in committee work where a clear, well-constructed agenda, along with a series of questions, focuses the assembly on the essence of the items to be considered.”

This focus has resulted in an incredible legacy that has truly enriched the University of Toronto.

The Vivek Goel Faculty Citizenship Award was created on the occasion of Vivek Goel’s departure from his role as Vice-President and Provost of the University of Toronto in 2008. It recognizes exemplary University faculty who have a sustained record of administrative contributions and this year two distinguished faculty members are being honoured with this award. It is presented each year under the banner of the Awards of Excellence, a program recognizing the outstanding members of the University of Toronto community who have made rich and meaningful contributions to the University, their communities and to the world.

Professor Judith Poë and the other 2016 Awards of Excellence recipients will be honoured at a recognition event on May 4.