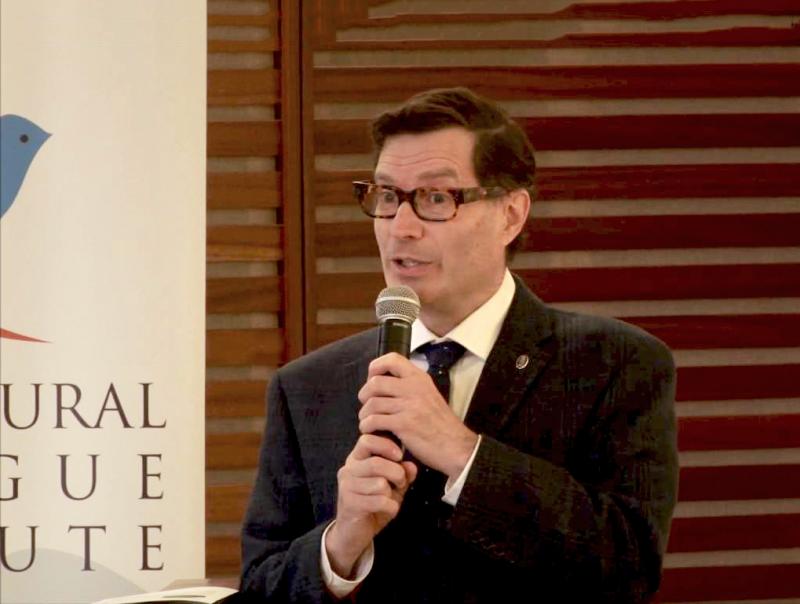 Under the leadership of Richard Chambers (MDiv 1986), U of T’s Multi-Faith Centre for Spiritual Study and Practice has become a vibrant hub where students enjoy deeply enriching learning experiences with their peers from diverse religious traditions. His extraordinary successes are being honoured this year with the Joan E. Foley Quality of Student Experience Award.

“And so we invited those Muslim and Christian students to work together to develop a program around the lives of Martin Luther King and Malcom X. The students were very excited! And it turned into a Muslim-Christian dialogue, starting from exploring the experience of social justice in racialized communities.”

This project was a microcosm of how inter-faith dialogue works at the Centre, which connects and supports the approximately 100 diverse religious communities on campus. Because six Christian theological colleges are associated with the University, Christian religious communities are the largest on campus, commented Chambers. But there are also four fast-growing Muslim communities, two Hindu, one Sikh, several Buddhist, and many others, including the Secular Alliance club for humanists and atheists.

Programming is offered for students of every faith and of no faith, as well as for students exploring the intersection of faith and LGBTQ, gender or racialized identities. It offers mindfulness meditation, art space, social justice programs and space for worship. Its mission is to help students explore ways to live lives of meaning and purpose.

“The Multi-Faith Centre is in fact a tangible expression of the University helping students to feel like integral members of the community, by taking their experiences seriously,” says Chambers. That’s why he ensures that programming is student-led. For example, he says, this year’s Hindu-Christian dialogue program, developed this past September, was created due to student interest. And he encourages each of the Centre’s 11 interns to develop an autonomous project.

Chambers frequently organizes Centre programming around social justice issues that are not exclusive to any particular faith. He also acknowledges his terrific team at the Centre, each bringing their own individual strengths and complementary skills that support the programming offered. “Our experience is that most students are interested in making a difference for good in the world,” he says. “It’s one of the common touchstones.” Poverty, the environment, the global refugee crisis – students come together to work on the solutions regardless of personal faith.

Only a small percentage of students are interested in discussing specific doctrinal practices, he says. But as they work on a social justice project students may discuss religious traditions or experiences that inspired them to get involved. “Talking about religious difference is a nonstarter,” he says. “But by inviting students to reflect on where their interest in social justice issues comes from, it’s an opportunity for students to name their differences, and as students name their differences, there’s a process of fostering mutual respect and understanding. They learn to navigate across differences for the common good.”

Chambers is catalyst for positive relationship-building across campus, say his colleagues. He has the gift of helping students turn community work into learning experiences, and is often the first to reach out in tragedies, for example when Typhoon Haiyan devastated the Philippines in 2013 or when terrorists attacked Paris in 2015, to offer support and resources to grieving students. They praise the atmosphere of trust he has created at the Centre, which diffuses potential tensions and brings people together.

The opportunity the students are enjoying at the Centre may be unique, says Chambers. While students will collaborate with people of many backgrounds and traditions throughout their working lives, it’s not so usual to socialize across faiths. “This is a unique time in a student’s life to take advantage of wonderful opportunities to interact with students from very different religious traditions and world views,” he says.

In addition to being Director of the Multi-Faith Centre, Chambers is also Secretary of the Campus Chaplain’s Association and a teacher with the Religious Diversity Youth Leadership Project’s certificate program. Several other Canadian universities have consulted with him to plan their own religious engagement offerings, and he is a frequent presenter on tolerance, diversity and anti-discrimination initiatives across Canada and the US.

The Joan E. Foley Quality of Student Experience Award is named in honor of Professor Joan Foley who was the first female Principal at UTSC and the first female Provost at U of T; her remarkable career at the university has spanned more than 50 years. This award is presented each year under the banner of the Awards of Excellence, a program recognizing the outstanding members of the University of Toronto community who have made rich and meaningful contributions to the University, their communities and to the world.

Richard Chambers and the other 2016 Awards of Excellence recipients will be honoured at a recognition event on May 4.