It was built in 1923 to 1924 using $397,141 raised by the University of Toronto Alumni Association to build a war memorial and establish scholarships in memory of those students, faculty, staff and alumni who served in the Great War. The initial cost of the Tower and memorial screen, the clock and the carillon was $252,500. The interest on the surplus is still in use today for War Memorial Scholarships and for Tower expenses.

Accessible to the public year-round. 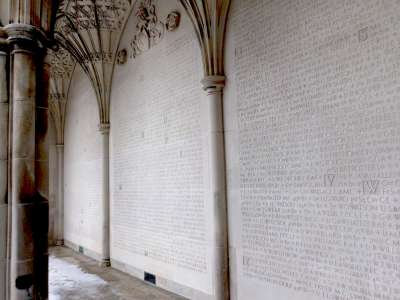 Carved in stone on the memorial screen are the ranks, names and units of those lost to the university in the First World War. 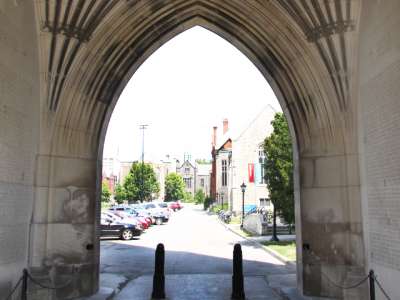 The two walls of the archway record the service of the men and women lost in the Second World War. 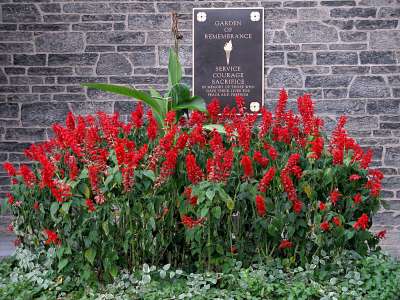 The garden behind the memorial screen provides a place for quiet reflection.

Stained glass windows, paintings, inscriptions and artifacts commemorate those who served and those who fell in the two World Wars.

Please note: The Soldiers’ Tower is a heritage building, the interior of which is not accessible to persons with certain disabilities. The stairwell to the Memorial Room is equipped with a stairlift. If you have a disability requiring accommodation we request that you contact us in advance so we can provide more detail and make your visit as accessible as possible. 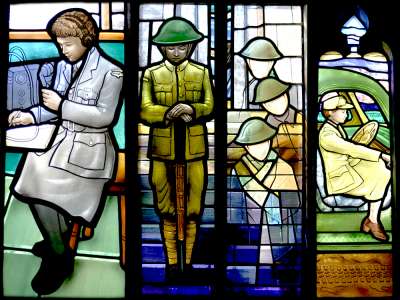 Eight stained glass windows commissioned by the Soldiers’ Tower Committee in 2005 honour Canadian forces in action during wartime. The men and women depicted have the rank of private or equivalent.

Shown here: (left) a radio operator at work in the Royal Canadian Air Force (Women's Division); (centre) a private soldier pays tribute to the fallen, who are portrayed in ghostly images, at the Vimy Memorial ( gift of Major Roy B. Oglesby); (right), a member of the Canadian Women's Army Corps sits at the wheel of a vehicle (gift of Major General Bruce Jarvis Legge, 4T1).

Open to the public several times per week on an irregular schedule. Researchers or groups may also contact us for appointments outside of scheduled hours. 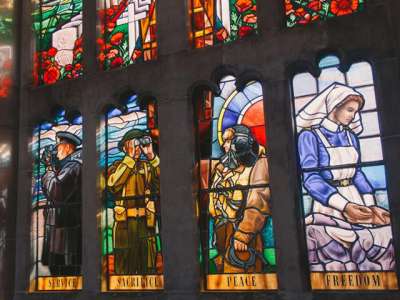 This beautiful stained glass window was commissioned for the Soldiers’ Tower and dedicated on November 6, 1995. Designed and built from hand-blown antique glass by The Russell C. Goodman Stained Glass Studio, of Parry Sound, its symbolism is based, in part, on John McCrae’s poem In Flanders Fields.

The victory torch in the centre stands for the attainment of peace and of hope. The maple leaf, rising above, represents the emergence of Canada as a nation devoted to freedom, understanding and world peace. The poppies at the foot of the crosses invoke remembrance. The four lower panels depict a sailor, a soldier, an airman, and a nursing sister representing the women of all three services. 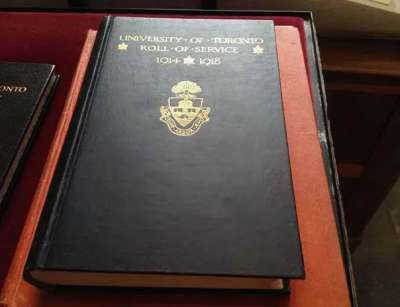 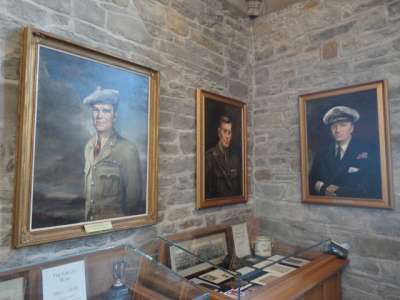 Portraits of some illustrious graduates of this university are on display: Lt.-Col. John McCrae, who wrote In Flanders Fields; Major Thain MacDowell, VC, DSO, who earned the Victoria Cross in the battle of Vimy Ridge; Major Fred Tilston, VC, awarded the Victoria Cross for his efforts in Hochwald Forest (Germany), 1945; and the co-discoverers of insulin, Sir Frederick Banting and Charles Best. Both served in the Canadian Army in the First World War and contributed medical expertise in the second. 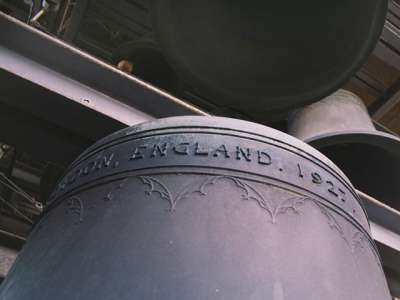 The original 23 carillon bells were donated by U of T alumni and dedicated to members of the University who fell in the First World War. The dedicatory inscriptions are carved into the walls of the Memorial Room. 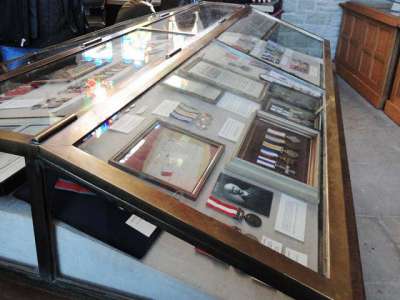 The Memorial Room includes a collection of medals, photographs, flags and colours. These artifacts honour the memory and wartime service of the University’s students, faculty and staff who fought to preserve our liberties and democracy. 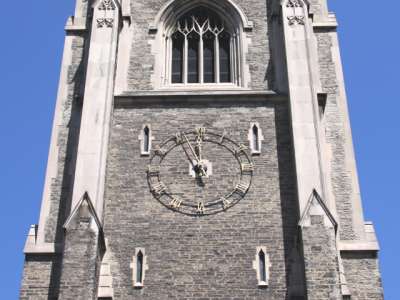 The clock was purchased in 1927, by the University of Toronto Alumni Association, from the British firm Gillett and Johnston, together with the original 23 bells of the carillon.