'There are lots of ways to achieve your goals': Amna Adnan graduates as a mentor and role model 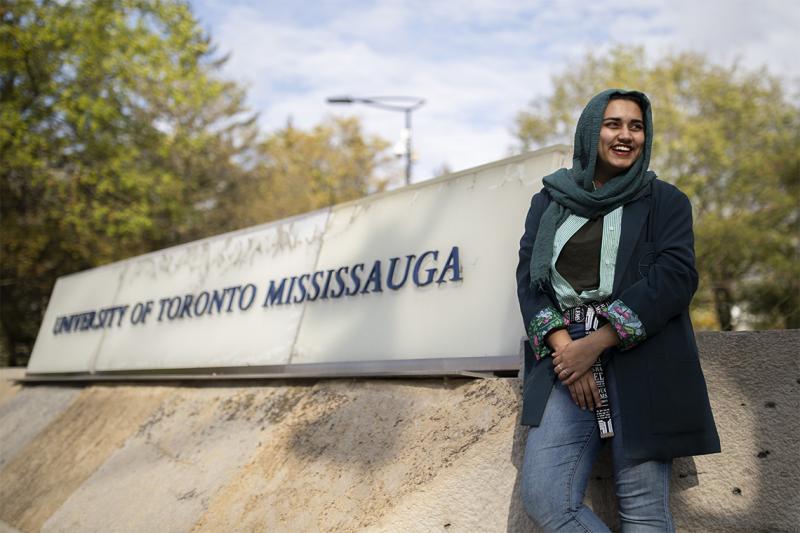 For Amna Adnan (BA 2021 UTM), the path to convocation can best be described as a journey – one that saw her change her major six times, discovering more about herself along the way.

She was also a role model who touched the lives of numerous fellow undergraduates at the University of Toronto Mississauga as a leader and mentor, empowering them to realize their full potential.

When she receives her degree this week, Adnan will also have a couple of other honours under her belt, including the Laura Krajewski Student Mentorship Award and being named U of T Mississauga's welcome ambassador for convocation.

“My friends and family that I’ve told have been incredibly excited,” says Adnan, who will be graduating with an honours bachelor degree in science with a major in psychology and minors in English and sociology.

Adnan has been an active volunteer and work-study student throughout her five-year university career, particularly with the Centre for Student Engagement. She mentored fellow students at the centre and facilitated workshops in a variety of roles including as a peer leadership coach and LAUNCH Leader. Adnan has also been a student mentee through various programs such as utmLead and the Alumni Mentorship Program.

“My goal is to try and help people reach the potential that they have within them that’s often obscured by a lack of confidence or not knowing where to go,” Adnan explains. “Mentorship for me is a personal value, and I want to help people become what I can’t become.”

While Adnan served as a role model and leader on campus, she notes that she went through her own mental health journey – an experience many other students can relate to.

In her third year, she learned she had ADHD. She calls that moment a “game-changer.”

“Once I learned that about myself … I did take a few courses just to help learn more about mental health partly because I wanted to understand myself more, but also because I wanted to become a better resource and tool for accessibility both in my life and also in my professional spaces,” Adnan says.

There are lots of ways to achieve your goals, and your goals can be different than the mainstream

She pivoted throughout her academic career. Initially accepted to U of T Mississauga as a life sciences student with a plan to study biology or chemistry, Adnan soon realized that, while she loved learning about the subjects, her heart wasn’t in the lab components.

After that, she looked into studying psychology, management and English. In the end, she decided to study a combination of psychology, English and sociology.

“There are lots of ways to achieve your goals, and your goals can be different than the mainstream. In terms of academics, I really made it work for me,” she says, adding that she hopes her personal experiences have helped others – particularly first-year students and those who have felt nervous about changing their majors.

When Adnan graduates, she is planning for a career in student affairs at a post-secondary school.

“University is one of those really, really cool areas where the majority of folks are young adults that are looking to start something – start that next chapter of their life, or folks that are coming back after having done things outside and are looking to pivot or grow more,” Adnan says.

Adnan says she has always looked up to her parents, particularly her father, who died when she was in high school.

“(They were) immigrants to the country, incredibly hardworking, very sacrificing,” Adnan says, adding that they taught her that “the hard work you put into something is more important than whether or not you succeed in it, and that has helped to kind of define my processes of grit and resilience.”