Structural violence: U of T's Dexter Voisin on systemic racism, trauma and the Black community 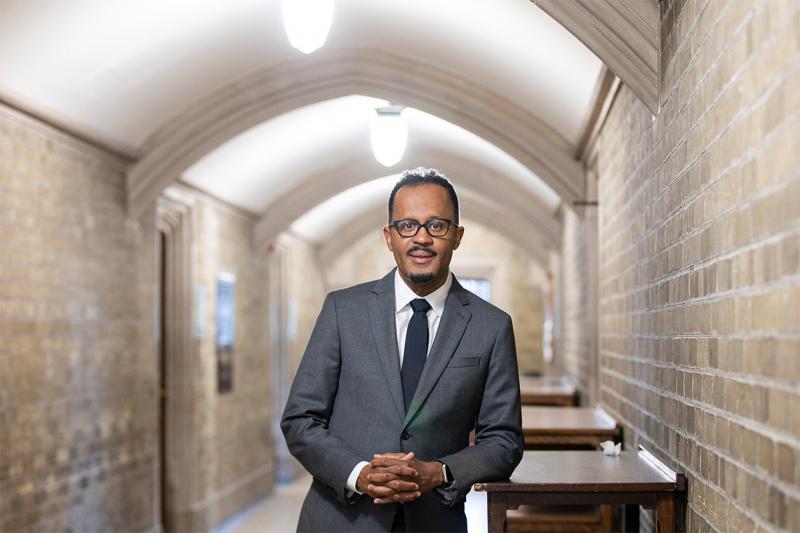 Dexter Voisin, dean of U of T's Faculty of Social Work, spent more than 30 years in the U.S. as a social worker and academic, and has dedicated much of his career to studying the impact of violence on youth in urban communities (photo by Nick Iwanyshyn)

Dexter Voisin, dean of the University of Toronto’s Factor-Inwentash Faculty of Social Work, has dedicated much of his career to examining how structural and neighbourhood violence affects youth in urban American communities.

He is particularly interested in the role of systemic racism in contributing to violence – a topic he explores in his book America the Beautiful and Violent: Black Youth and Neighbourhood Trauma in Chicago.

Voisin, who spent more than 30 years in the United States as a social worker and academic, has been closely watching news of the Black Lives Matters protests and following the calls to end police brutality.

He recently spoke with University of Toronto Magazine editor Scott Anderson about systemic racism in the U.S. and Canada.

How has your own background influenced your perspective on racism and violence?

I grew up in Trinidad, where I saw people that looked like me in leadership positions. I didn’t grow up with the same degree of constraint, which is very common when you think about the impact of race in the United States.

Imagine that from birth, as part of the majority group, you have both explicit and implicit messages telling you that you are special and superior. But if you fall into a minority group, such as Blacks in the United States and elsewhere, you’re told that you are inadequate or inferior – through television, through movies, through lack of representation. Your history is not told. You grow up with the sense that you don’t have full citizenship, and that your life is not as fully valued as others’. You see the systems that perpetuate inequalities – in education, in child welfare, in policing and prisons, in employment. These messages come to you constantly.

"Imagine that from birth, you’re told that you are inadequate or inferior – and that your life is not as fully valued as others. These messages come to you constantly"

Early in my life, I was shielded from many of those experiences. I was the first in my family to go to college and graduate school. Now, in my role as a social worker, and as an administrator, I ask how I can use my position to express the narratives of Black people who have not had these kinds of opportunities.  As a part of the Black community, I too experience discrimination and the pain that is associated with it. I see those experiences and trauma, but also resilience. I think it’s important to bring those perspectives to the larger conversation.

In your book, you use the term “structural violence” to refer to how many Black people, particularly in segregated neighbourhoods, experience systemic racism. Can you elaborate?

People usually think of violence in terms of a use of force – like a hit, a push, a kick or a gunshot – that causes physical trauma. But we can talk about the arrangement of society and the systems that work to constrain and reduce the potential, hope and imagination of possibilities for individuals as “structural violence,” which also contributes trauma.

"we can talk about  the systems that constrain and reduce the potential, hope and imagination of possibilities for individuals as 'structural violence'”

In communities where there’s a lot of police surveillance and people are given more traffic tickets, more code violations related to their homes, and are arrested more often, it’s a form of structural violence.

All the systems that constrain hope, constrain possibility and constrain social uplift – these are all forms of structural violence.

You identify over-policing as a cause of structural violence. Protesters are calling for defunding – or abolishing – police departments. Do you agree with this approach?

We need safety officers in a civic society. But what this looks like is up for discussion.

We need to thoughtfully consider how we use funds to make the police more efficient and accountable, but, more importantly, to benefit the communities they serve. When reviewing police budgets, it’s possible we may discover that some police are underfunded in some areas and overfunded in others.

Are there other situations where you think social workers could play a larger role in pubic safety?

Substance abuse and homelessness. You can have case workers, social workers, and community advocates responding to these calls in a more humane and more holistic way. Some police officers might experience a sense of relief to put these in the hands of better-equipped professionals.

How can police be held more accountable on the calls they do make?

My father was a police officer for many years, so I have the utmost respect for police. I can't imagine what it’s like to put your life on the line every day for public safety. But some people in that job are not focused on public safety. That’s the first issue that needs to be addressed.

"I have the utmost respect for police. I can't imagine what it’s like to put your life on the line every day. But some people are not focused on public safety"

More and more evidence is emerging about the use of excessive force. Abolishing choke holds and training police in de-escalation methods and maintaining a public record of officers that have misconduct violations are examples of long overdue changes.

Do you think body cams are effective?

They may be helpful, but not on their own. Body cams have to be used in conjunction with other common-sense policy changes. What’s important is the oversight of police. Is there an independent board responsible for adjudicating police misconduct? Is the use of excessive force illegal? If you see a fellow police officer using excessive force, are you responsible for intervening? These policies change police culture. Body cams alone won’t do that.

You’ve been in Toronto for about a year. What’s your sense of how racism manifests here versus south of the border?

People often think of racism as the KKK or the marchers in Charlottesville, N.C. with the tiki torches. But it can be a lot more subtle. In Canada, the desire to be “colour blind” is a form of systemic racism.

"In Canada, the desire to be “colour blind” is a form of systemic racism"

When a leader says, "We don’t collect race-based data because we value all Canadians the same,” the statement, though well intended, nods to systemic racism. It tells non-white individuals that their experience is invisible – that any experience outside the white experience is not worthy of being recognized. The refusal to collect race-based data is an endorsement of racism by people in positions of power. We may actually be doing worse than in the United States. We don’t know because we don’t measure it.

It's been an eventful two weeks. People are talking about the potential for change. How do you feel right now?

Hopeful – in part because some change has already taken place. Social activists and community members have the attention of decision-makers in Canada and the U.S. in a way that I can’t remember them having in a very long time. Folks are having more conversations about race and racial inequality. The question is how far will change go?