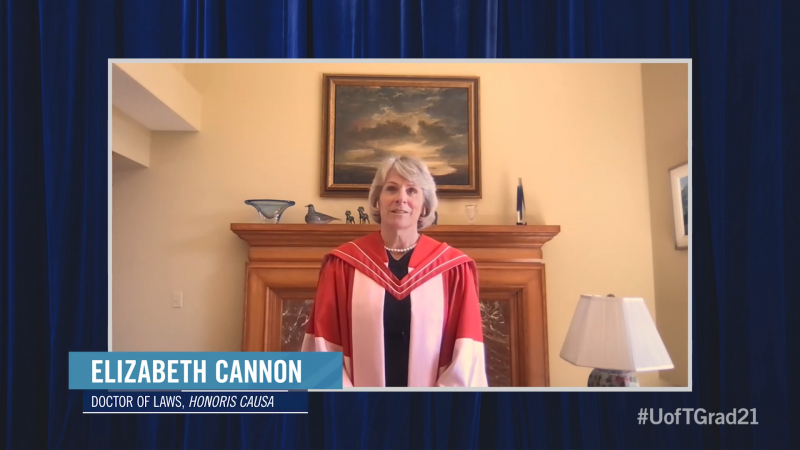 These days, it is difficult to imagine getting lost. Using almost any smartphone or car, you can pinpoint your location to a few metres, anywhere in the world.

The huge growth in global positioning applications now used in all sorts of devices owes much to Elizabeth Cannon (Hon LLD 2021). For almost four decades, she and her engineering colleagues have contributed to advances in global navigation satellite systems (GNSS) that have made it dramatically easier for people to know exactly where they are.

A brilliant researcher, Cannon has also excelled as an academic leader, serving for eight years as the president of the University of Calgary.

Working in a traditionally male-dominated field, she has helped raise public awareness about science and engineering careers for women, and mentored many young women herself. “Making sure [they] know what the opportunities are and helping them make informed choices is what it’s about,” she told Inside GNSS magazine.

Today, in recognition of her work as a “leading researcher and a tireless ambassador for science and technology in Canada and globally,” Cannon received a Doctor of Laws, honoris causa, from the University of Toronto.

Cannon earned an applied science degree in mathematics from Acadia University in 1982 – a time when only about one in 10 engineering students in Canada was a woman. She first encountered the global positioning system (GPS) while working as a summer student the following year at Calgary’s Nortech Surveys. She grew fascinated by the idea of using signals from space to precisely ascertain a location, or measure distance, on the ground.

GPS totally captured my imagination. I thought, I don’t know how it will impact society, but I knew it was going to in major ways

“GPS totally captured my imagination,” she told the Natural Sciences and Engineering Research Council of Canada in 2002. “I thought, if I can get involved with this, I don’t know how it will impact society, but I knew it was going to in major ways.”

She decided to pursue geomatics engineering – a discipline related to collecting, managing and analyzing data about the Earth – and earned a PhD in the subject at the University of Calgary.

At the time, GPS was still a relatively new field, but Cannon saw the potential for valuable, industry-changing applications.  She became known for her research into systems with a very high level of accuracy (down to the centimetre level) and for her ability to translate this research into commercial products.  She went on to co-author several GPS-related software packages that are now used by thousands of organizations around the world – including for precision farming, wildlife tracking and vehicle navigation.

She went on to co-author several GPS-related software packages that are now used around the world for precision farming, wildlife tracking and vehicle navigation

In the mid-2000s, Cannon shifted her focus to academic administration – first as dean of the Schulich School of Engineering at the University of Calgary, then as president of the university, from 2010 to 2018.  She led the creation of the university's “Eyes High” strategy and the rollout of its $1.3 billion “Energize” fundraising campaign. Gordon Ritchie, chair of the University of Calgary’s board of governors, credited Cannon with transforming the university into “one of Canada’s most recognized and dynamic institutions of higher learning.”

Throughout her career, Cannon has received numerous accolades. In 1998, the Globe and Mail selected her as one of Canada’s Top 40 Under 40. She is a Fellow of the Royal Society of Canada, an Officer of the Order of Canada, and has four honorary doctorates. In 2001, she became the first woman to win the Johannes Kepler Award from the U.S. Institute of Navigation, a prestigious international prize.

Currently, Cannon writes and speaks publicly about leadership, strategy and innovation.  In today’s address to the Class of 2021, she identified three qualities that she argues will serve them well during their careers: preparation, resilience and leadership.

“I believe these attributes are universally important,” she said, “whether you are an engineering, science, business or history graduate.” 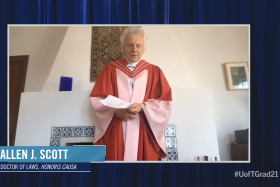