Atwood takes centre stage, is celebrated at the Emmys 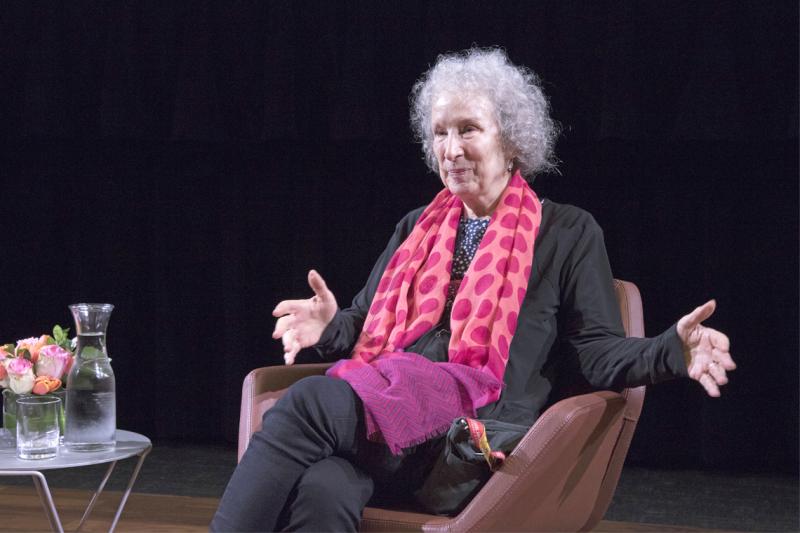 Margaret Atwood answers questions from the audience at the Canadian premiere of The Handmaid's Tale in May 2017, at Innis College (photo by Romi Levine)

The Handmaid’s Tale dominated the show at the 69th Primetime Emmy Awards, winning all five of the Emmys for which it was nominated, including outstanding drama series. And alumna Margaret Atwood, author of the iconic book, was front and centre, even garnering a standing ovation when she joined the show’s cast and producers onstage.

Atwood was also celebrated in the acceptance speeches, with the show’s creator Bruce Miller thanking her for “scaring the living crap out of him in college,” when he first read the 1985 dystopian novel.

He mentioned her again in his later acceptance speech for outstanding drama series, thanking her for “creating this world for all of us.”

The television adaptation of The Handmaid’s Tale – a critical and commercial hit – brought a new audience for Atwood’s story about Offred, a handmaiden trapped in a patriarchal dystopia.

When U of T alumna Atwood attended the Canadian premiere of the first episode of the series at Innis, she spoke about the show’s resonance in the Trump era.

“The entire cast of the series woke up on Nov. 9th and looked at each other and said, in essence, 'we are no longer in a fiction,’” she said.

Atwood has deep roots at the University of Toronto. She was an undergraduate student at Victoria College and the writer in residence in 1972. Her first handwritten draft of The Handmaid’s Tale (pictured left) is at the University of Toronto’s Thomas Fisher Rare Book Library, along with book covers of the novel from all over the world. In fact, Atwood has given to the library over 600 boxes worth of archival material from her storied writing career.

After the Emmys, Atwood spoke to reporters about what she hopes people will take away from the TV series and book.

“Well, one take-away would be ‘never believe it can never happen here,’” Atwood said. “Which was one of the premises I used for the book. Nothing went into the book that people hadn’t done at some point in time, in some place.”

Atwood was not the only alumus to win at the Emmys. Lorne Michaels, who graduated from U of T in 1966, won for the sketch series show he created, Saturday Night Live. SNL garnered nine of the 22 Emmys it was nominated for in 2017, including outstanding variety sketch series.

Michaels, who received five nominations, now has a lifetime total of 78 nominations – the highest of any individual.

"I remember the first time we won this award, it was after our first season in 1976,” Michaels said in his acceptance speech. “And I remember thinking as I was standing there, alone, that this was it. This was the high point. There would never be another season as crazy, as unpredictable, as frightening, as exhausting, or as exhilarating.

“Turns out I was wrong.”