It would be easy to use the phrase "flying high" to describe Julie Payette’s career as an astronaut. But the term can also be used for so many other things in her life that she takes to the highest level.

Julie Payette is best known as the first Canadian to board the International Space Station in 1999 and for serving as flight engineer and lead robotic operator on the Space Shuttle Endeavour 10 years later.

Fluent in French and English, she can also speak Italian, Russian and Spanish. And sing in those languages. Payette was a member of the Tafelmusik Baroque Orchestra Choir from 1989 to 1992.

This native Montrealer obtained an International Baccalaureate at the United World College of the Atlantic in Wales in 1982, a BEng in electrical engineering from McGill in 1986 and a MASc (Computer Engineering) from U of T in 1990.

"Once I completed my Master’s degree from the University of Toronto I was ready to tackle professional jobs."

Payette decided to become an astronaut after watching Apollo missions to the Moon at school in Montreal.

"I’m nine years old, I’m sitting down on the floor of a gym and I’m watching astronauts walking on the moon,” she recalled in an interview with U of T Magazine. “I don’t speak English. I’m a Canadian girl… I had never been in an airplane… and I thought this is so cool I wanted to do the same."

"It didn't matter to me that I was the wrong nationality, the wrong gender and spoke the wrong language. It didn't cross my mind that this was a bit of a far-fetched goal because when you're nine years, you don't think of those things."

Named public policy scholar at the Woodrow Wilson Center in Washington, D.C. in 2011, Payette has also been appointed scientific delegate to the United States for the Quebec Government. She remains a member of the Canadian astronaut corps. 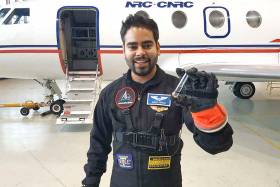