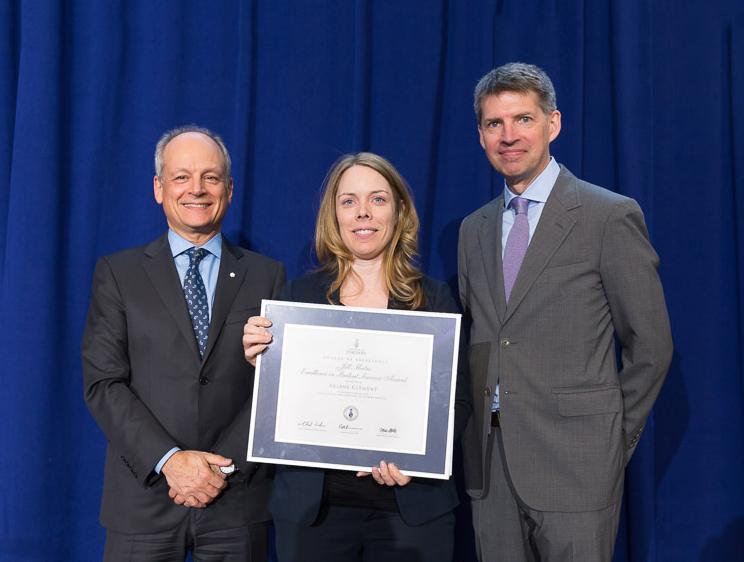 For spearheading initiatives that have made it easier for students to apply for residence, Arlene Clement (BA 1996 St. Michael’s), Director of Housing Services, is one of this year’s two recipients of the Jill Matus Excellence in Student Services awards.

“Living in residence was how I really found my place as a student at U of T,” says Clement. “I lived at Loretto College, at St. Mike's, in my first and second years. It gave me a built-in
support network and lifelong friends.”

Clement understands that how and when students secure a place to live can set the tone for their entire university experience. And so she and her colleagues at Housing Services and the University’s residences work together to proactively make sure the process is as personalized and user-friendly as possible.

Thanks to the University of Toronto’s unique college system, the process of applying to residence used to be as decentralized as the campus itself. As recently as 2008, students had to apply separately to up to 12 different residences if they wanted to be considered for all of them. Clement pulled together a cross-University team including key stakeholders from IT, Housing and from the various residences to create an easy-to-use, centralized single application method.

MyRes is a gateway linked to ROSI, explains Clement, that guides students through the residence application process and presents their unique options in a way that’s easy to visualize. For example, a student who is applying to two different divisions, such as Engineering and Music, would see two tabs on their application screen. Each shows the residence options (for example, acceptance to Engineering makes a student eligible to live at Innis College, but a Music student wouldn’t have that option), and lets them apply in one place.

From the University’s point of view, says Clement, MyRes also supports data collection that helps determine future residence demand. “Some of that data,” she says, “contributed to the University’s decision to look at building new residences.”

In a related project, she spearheaded a long-term plan for a single residence management system across the three campuses (StarRez), and the automation of residence fees from that system to Student Accounts, to further support a more consistent, easy-to-use process for all students applying for residence. Because StarRez is intergrated with ROSI, she says, it’s also easier to gather information on students currently on campus, in cases of emergency.

The next step, she says, is to bring students’ T-Card photos in the system as well. Although ID photographs don’t fall under the Housing brief, Clement stepped forward to lead a project to create a secure repository for student TCard photos when she learned that more than 17 separate stakeholders across the University (including residences) were taking student photos. Because T-Card images were not saved after the T-Card was printed, students were saying cheese again and again, across U of T.

“A key goal of this project was to protect students’ privacy by ensuring FIPPA requirements were met, and limiting access to approved applications that support academic integrity, safety and security, or build community in the classroom,” says Clement. Now, authorized University officials can look students up in ROSI and verify their identity or create a class composite. “We’re also building an exam invigilation tool,” she says. It will support academic integrity, but also reduce stress if a student forgets to bring their T-Card to an exam.

Excluding a year working as Senior Communications Officer at the Faculty of Medicine, Clement has worked in the division of Student Life since 1997, where she has also managed the Health & Wellness Centre. She has a Master’s Degree in Education, completed certificates in conflict resolution, violence prevention and suicide intervention, and still finds time to volunteer on the board of a United Way agency and sing in a choir.

Her colleagues praise her ability to build relationships with disparate teams across the university and say she is regularly approached to manage big, complex projects. “I think a commitment to consultation is important and essential,” says Clement. “Because there often can be differing perspectives, processes and priorities, it’s my job to engage all stakeholders and to work collaboratively towards solutions. What makes it work is that all of my colleagues are as committed as I am to supporting the student experience.”

“Housing,” she says, “for anyone, is the foundation for the life you lead. If you have poor or unstable housing, it can put everything else – academics, finances, physical and mental health – at risk.”

A good experience, however, can be an enriching part of the university experience. “On- or off-campus,” she says, “housing can be where you learn about budgeting, negotiating with others and managing conflict, navigating systems, advocating for yourself and others. You learn about who you are, how the world works, and how you’re going to work within that world.”

The Jill Matus Excellence in Student Services Award was established in recognition of Professor Jill Matus’ exemplary service to the University of Toronto, spanning seven years as Vice-Provost, Students and Vice-Provost, Students and First-Entry Divisions. It is presented each year under the banner of the Awards of Excellence, a program recognizing the outstanding members of the University of Toronto community who have made rich and meaningful contributions to the University, their communities and to the world.

Arlene Clement and the other 2016 Awards of Excellence recipients will be honoured at a recognition event on May 4.