"The scale of grief and loss is terrible": Meet the U of T alumna fighting to prevent opioid overdose deaths 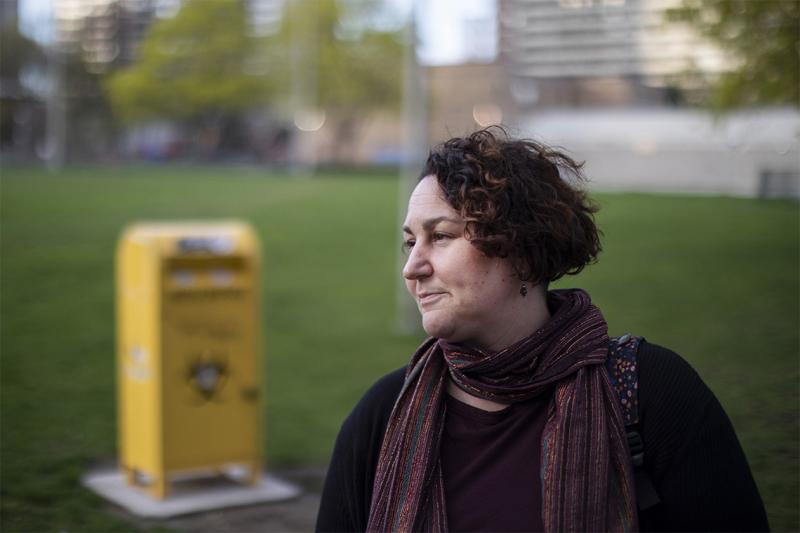 Gillian Kolla (MPH 2009), a PhD candidate at the Dalla Lana School of Public Health, has helped save scores of lives with oxygen tanks and naloxone kits at Moss Park (photo by Nick Iwanyshyn)

A young woman with blonde hair and a nose ring peers curiously at the camera. A middle-aged man with grey hair leans against a tree. A young man grins.

These photographs are scattered on the memorial wall of the Moss Park Overdose Prevention Site. They represent only a fraction of the overdose deaths the Moss Park community has suffered so far this year. The overdose crisis has taken the lives of more than 10,300 people in Canada in the past three years, but right now Toronto’s illegal opioid supply is more lethal than ever.

In 2016, heroin began to give way to the far more potent fentanyl, and overdose deaths soared. Then, starting in January of this year, lab tests showed carfentanil, an even more powerful opioid not meant for humans, had entered the supply.

“The scale of grief and loss is terrible,” said Gillian Kolla (MPH 2009), a PhD candidate at the Dalla Lana School of Public Health who has helped save scores of lives with oxygen tanks and naloxone kits. “We don’t think of people who are homeless and use drugs as having strong communities, but they do. And these communities have been devastated.”

Starting in the summer of 2017, Kolla worked alongside other volunteers from the Toronto Overdose Prevention Society to open Ontario’s first supervised consumption site. For 11 months, they operated unsanctioned in tents, and later a trailer, in Toronto’s Moss Park, stocked with naloxone kits, oxygen tanks and sterile injection equipment. Over 150 volunteers – many of them people with lived or current experience of drug use – supervised more than 9,000 injections, and saved the lives of 251 people.

They also served on the province’s Opioid Emergency Task Force, helping the provincial government develop its model for overdose prevention sites. The following summer, by the time the Moss Park operation moved to an officially approved and funded space across from the park, eight legal supervised injection and overdose prevention sites were already operating in the city.

“Gillian is unique in how she has blended her skills as a service provider, academic researcher and advocate”

Kolla, a 41-year-old mother of two young children, is a fierce advocate for street-involved drug users. Her current research examines the delivery of harm-reduction services to people who use drugs by meeting them where they live and use drugs, aiming to improve their health in the process.

“Gillian is unique in how she has blended her skills as a service provider, academic researcher and advocate,” said her PhD thesis supervisor, Professor Carol Strike (PhD 2001). “She’s amongst the talented few with the skills and credibility to truly partner with people who use drugs to address issues like overdose, criminalization of drug use and housing that impact their lives.”

Kolla has been working with people who use drugs for over a decade, starting in Montreal with homeless and street-involved youth. She moved to Toronto to work on her master’s degree in public health at Dalla Lana in 2007, and began her PhD a few years later. When the overdose crisis hit, Kolla was doing field research on a novel harm-reduction program that delivered education and equipment directly in the spaces where people gather to use drugs. She saw first-hand the increased overdoses caused by the contamination of heroin with more potent opioids like fentanyl.

In the fall of 2016, when overdose-related deaths started climbing across Canada, Vancouver activists opened the first guerilla overdose prevention site by erecting a tent in an alley. The following summer, after years of frustration trying to open supervised injection sites in Ontario, Toronto activists decided they didn’t need anyone’s permission to save lives, either. They formed the Toronto Overdose Protection Society (TOPS), bought a few tents and set up in Moss Park.

“We didn’t know it at the time, but Toronto Public Health released data months later showing we opened the tents at the epicentre of the city’s overdose crisis,” said Kolla, who is a member of the co-ordinating committee for TOPS and was responsible for compiling usage data. “In our very first month in the park we reversed 15 overdoses, in only 18 days. And it just continued from there.”

Community members who spent time in the park helped with tent setup and takedown every day. Cuz, a 45-year-old man originally from Nova Scotia, pitched in regularly.

At the time, Cuz was overdosing and ending up in the hospital frequently. Once he was in a coma for a week. With fentanyl, he said, there’s no way to know what you’re getting. It scared him to think of the girl he watched overdose after injecting just $2 worth of it. Cuz began hanging out at the site, and started to use in the tent. He spent time learning about safe injection practices, but also enjoying the feeling of safety – knowing he was not going to die or be arrested in that moment.

the sense of community in the tents felt healing. “I saw that each time I helped out, things got better for me”

For Cuz, the sense of community in the tents felt healing.

“It’s the love, the caring, and all the little things,” he recalled. “There was nothing those guys wouldn’t do for me. It was the tent – I didn’t know it at the time, but I knew I was excited. They say it takes a village. When the first tent opened up out here, that was the first time it felt like a village. There wasn’t a sense of community for me until then.”

Said Kolla: “There was something so special about being in the park. People were bringing food, hanging out and chatting in front of the tents. It was really powerful and it fostered a sense of community that has continued to this day.”

Today, Cuz still uses fentanyl, but he’s careful to follow safe injection protocols, and to take care of himself by eating and most importantly getting enough sleep. He fears death a lot less.

He volunteers at a downtown supervised consumption site, enjoys his son and new baby granddaughter, and is thinking about starting a roofing company that could employ drug users able to do strenuous work.

“When you feel like you’re making a difference you don’t want to stop that,” he said. “You’re creating happiness, safety and nurturing. I took myself out of a certain crowd and saw that each time I helped out, things got better for me.”

Overdose prevention sites are about saving lives first and foremost. And yet during her Saturday-night shifts in the Moss Park tents, Kolla found herself constantly on the phone, trying to find people spots in shelters, helping them get into detox or connected to other social services.

“Research shows that people who use supervised injection sites are more likely to access treatment than those who don’t use these services,” she said. “But it’s important that treatment is not seen as the goal. When people are forced into treatment it’s much less effective than when they choose to go on their own.”

She believes the tents sent a powerful message that the community “cared whether people who use drugs lived or died. And there was much more community support than we anticipated. If we tweeted that it was hot out and we needed more water, cars would pull up with bottles of water. Union members helped us get a trailer in the park and then wire it for electricity so we could stay warm through the winter. Neighbours donated food and we raised a lot of money on GoFundMe.”

Even law enforcement has been largely supportive, Kolla recalled. “Police see the deaths. They’ve even tweeted out drug warnings and advised people to use supervised consumption sites,” she said. “There has been a sea change in the way they relate to harm reduction. It’s amazing how far they’ve come.”

Jen Ko (BScN 2015), the nurse who co-coordinates the Moss Park Overdose Prevention Site, got her start as a volunteer in the park. “My experience was really transformative,” she said. “In health care, there’s a lot of lip service to being patient-centred. This was radical health care. It felt like such a privilege to be in this space.”

Today, there are nine supervised consumption sites in Toronto, but people are still dying when they inject at home, at night, or in places like Scarborough and Etobicoke that are far away from the downtown core, where most of the services are located.

The next frontier in harm reduction, Kolla said, is advocacy for the decriminalization of drug use, and the establishment of safer supply programs.

“Criminalization is negatively impacting how quickly we are responding to the overdose crisis,” she said. “Right now, the drug supply is very dangerous, and there’s no way to get around this unless we get a safer supply to people at risk. And this isn’t something that can happen in a small pilot project: We are seeing catastrophic death rates. We need to roll out safer supply in big cities and small towns – and we need to roll this out yesterday.”