'He’d be thrilled': U of T's massive geoexchange project built on pioneering work of late alum 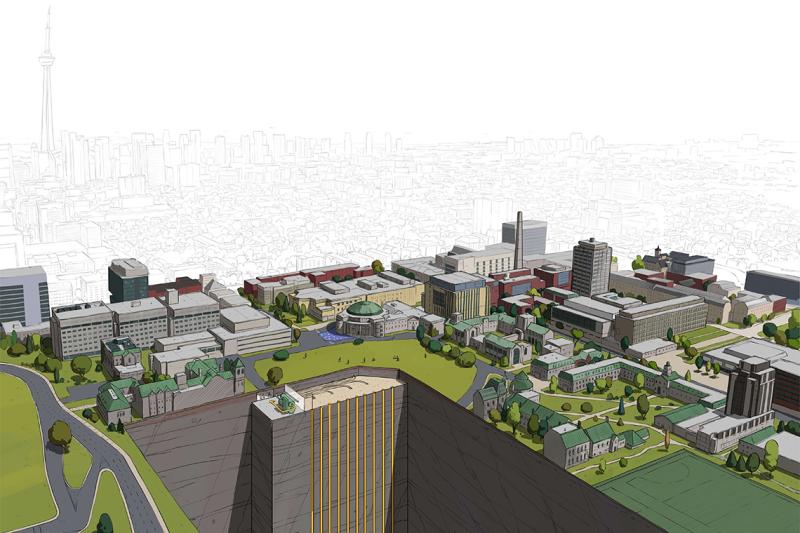 When Jim Wallace joined the University of Toronto back in 1978, one of the first people he met was Frank Hooper (BASc 1946).

“I took over a course that Frank had been teaching a while, and he was gracious enough to give me a copy of his notes,” says Wallace, a professor emeritus of mechanical and industrial engineering in the Faculty of Applied Science & Engineering. “Not long after that, he and his wife had me over for dinner. He was so supportive and helpful to the new guy.”

Hooper, who was also a professor emeritus of mechanical and industrial engineering, died in May 2021. He was an accomplished researcher in energy systems – and his legacy includes seminal work on ground-source heat pumps.

Today that technology is being demonstrated on an unprecedented scale as U of T constructs Canada’s largest urban geoexchange system at the heart of its St. George campus, which is being built in connection with the ongoing Landmark Project.

“He’d be thrilled to see this coming to fruition,” says Wallace. “They’ve done an amazing job.”

Heat pumps are based on the same general principles as refrigerators and air conditioners. In all of these systems, a working fluid circulating in a closed loop transfers heat from one source to another with the help of a compressor.

While refrigerators and air conditioners work in only one direction, heat pumps are reversible: in the summer, they extract heat from inside buildings and push it outside, while in the winter they do the opposite.

“The challenge is that the bigger the temperature difference between the inside and outside air, the less efficiently the heat pump works,” says Wallace, whose areas of expertise also include energy systems.

“And once the outside air goes below 0 C, you start to have problems with frosting. At a certain point, air-to-air heat pumps basically become useless, and that’s the case a lot of the time in Canada.”

Luckily, the atmosphere is not the only medium that can be used to exchange heat with the air inside buildings: the Earth works as well. At sufficient depth – one or two hundred metres underground – the temperature remains constant year-round at about 10 to 12 C. This is an ideal level at which to reject waste heat in the summer, but also to recover it again in winter.

Essentially, you’re using the earth as a storage battery, but not for electricity – for heat

“Essentially, you’re using the earth as a storage battery, but not for electricity – for heat,” says Wallace.

Such systems are known as ground-source heat pumps, geothermal heat pumps or geoexchange systems, and Hooper was among the first to prove that they would be feasible in the Canadian context.

In the late 1940s, Hooper collaborated with what was then called Ontario Hydro on a demonstration project. The team designed and installed a ground-source heat pump for a newly built home in Port Credit, Ont., west of Toronto. The results were reported in a 1952 paper titled “An experimental residential heat pump” in the Canadian Journal of Technology.

“Hooper’s study was the first to show with actual data that ‘ground coils in suitable soils offer a satisfactory heat source in Ontario,’” says Wallace.

The work was later continued by organizations such as the National Research Council of Canada. Ontario Hydro led the creation of a Canadian Standards Association committee that developed technical standards for the design and installation of ground source heat pumps.

“One of the key things they were looking at was how to ensure that you get nice even contact between the pipe and the ground around it,” says Wallace.

“If you have voids, such as pockets of air, it makes the heat transfer less efficient, so you need to fill them with sand or other materials. Today, there are established standards for how to do that, but back then it was pretty new.”

This project serves as a demonstration for our city to show how you can start to decarbonize not only new buildings, but even the most historic ones

Ron Saporta (MBA 2013) knows this well. As U of T’s chief operating officer, property services and sustainability, he is overseeing the construction of the largest urban geoexchange system in Canada.

“This project represents the beginning of our transition to a climate-positive future,” says Saporta. “It serves as a demonstration project for our city to show how you can start to decarbonize not only new buildings, but even the most historic ones.”

Over the past two years, construction teams have drilled more than 370 wells underneath Front Campus, in the middle of King’s College Circle. Each one of them contains a U-shaped pipe that reaches a depth of 250 metres, about half the height of the CN Tower. The total length of piping works out to 185 kilometres, more than enough to stretch from Toronto to Buffalo, N.Y.

Eventually, this closed-loop piping system will be filled with a mixture of glycol and water, and connected through a new set of heat pumps to U of T’s existing building heating and cooling systems. By reducing the load on these systems, it is estimated that the new geoexchange system will prevent the equivalent of 15,000 tonnes of carbon dioxide each year from reaching the atmosphere.

The installation also offers a tremendous learning opportunity for engineering students in the form of a new subterranean classroom.

“We’ve designed the mechanical room in such a way that we can actually host lectures in there,” says Saporta. “We’re also planning to colour-code the pipes so it will be easier to understand which one does what. In the future, engineering students won’t just read about geoexchange in textbooks, they’ll be able to physically see how it works.”

Saporta adds that although it is the largest of its type, the new geoexchange system is by no means the only one at U of T. Similar systems are already in place under the Environmental Science and Chemistry Building at U of T Scarborough and the Instructional Centre at U of T Mississauga. Another one is under construction beneath what will be a new field at Roberts Street.

Wallace knows that Hooper would approve of both the large-scale application of heat pumps and the chance to train a new generation of engineers in the technology.

“He was a wonderfully gracious man,” says Wallace. “Just so welcoming, so helpful and eternally optimistic. He’d be really pleased about what all this represents for the future.”