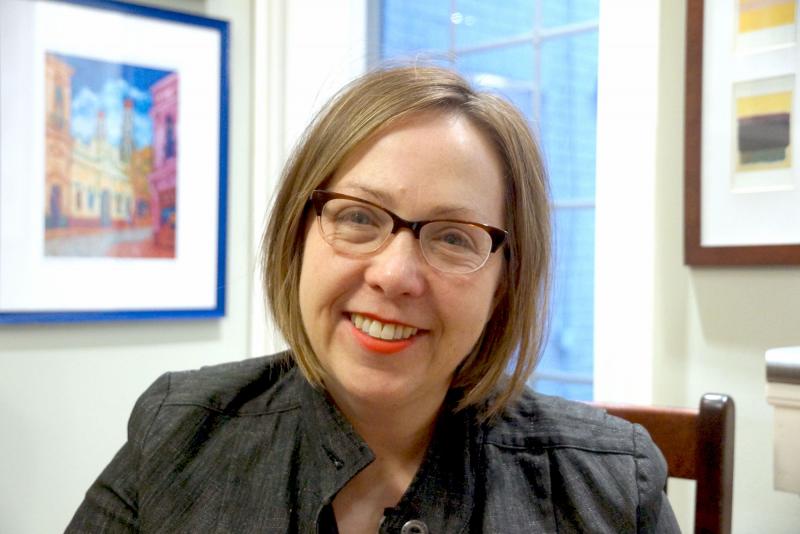 An open mind, an optimistic outlook and a desire to make things better. This is how a vision to improve food services and housing at the University began for Anne Macdonald (BMus Perf 1989, MBA 2001), Director of Ancillary Services.

For her initiatives in launching a new self-operated food services program to replace a corporate food provider, the transition of the Toronto Colony Hotel to a popular University residence, and the long-term plan for balanced growth in the Huron-Sussex neighbourhood, Anne Macdonald is the recipient of one of this year’s two Chancellor’s Awards.

It is no small feat for a large educational institution to dream of an ambitious food services transformation. More than two years in the making, Macdonald’s mission was to nourish the campus community and support the work of local food suppliers by transitioning to a high quality dining operation where all the food is made fresh on campus every day.

Macdonald was the driving force behind the idea but it was a tremendous collaboration, she stresses, and it wouldn’t have happened without Jaco Lokker, Director of Culinary Operations and Executive Chef, among others. “Food is important – you start the day with breakfast, you end with dinner,” she laughs. “I just knew we could do a better job of providing nutritious food that tastes good.” U of T Food Services is now one of the largest institutional food buyers in the country, and opts to source locally produced food more than 60 per cent of the time.

Students need food, but they need shelter, too. Macdonald is responsible for transitioning the Toronto Colony Hotel to a University residence, and for leading a team to work on a collaborative development plan in the Huron-Sussex neighbourhood, where U of T owns most of the houses. It’s also home to a housing program for new faculty members and their families. “It is challenging,” says Macdonald. “There are so many stakeholders with many different ideas and different objectives. Coming to a shared vision is a very interesting process, but a rewarding one.”

One part of the plan is to build homes in the laneways behind some of the houses in the neighbourhood, which adds low-density, affordable housing to the area. The University is already moving forward with the building of two laneway houses and one detached single-family house as a pilot project, and the neighbourhood has been very supportive of the work to date.

At heart, Macdonald is a collaborator. “I hope I am a good listener,” she says. “It’s easy to dismiss someone and say they are wrong if they don’t agree with you, but I think it’s much more interesting to say to yourself, if you have the courage, ‘What if this other opinion is right?’ That leads to empathy, compromise and thinking about doing things differently.”

Perhaps one of Macdonald’s biggest strengths is that she remembers what campus life was like when she was a student. For example, it was no fun having to trudge across campus through snow to get back to her residence for lunch. So in 2012, Food Services began allowing students to use their Meal Plan at 30 different locations.

“I’m an optimist,” says Macdonald. “I like to imagine a better future and I like to think that we can get there. It may be daunting and there may be roadblocks but I like to think it’s worth the challenge.”

Anne Macdonald and the other 2017 Awards of Excellence recipients will be honoured at a recognition event on April 27.